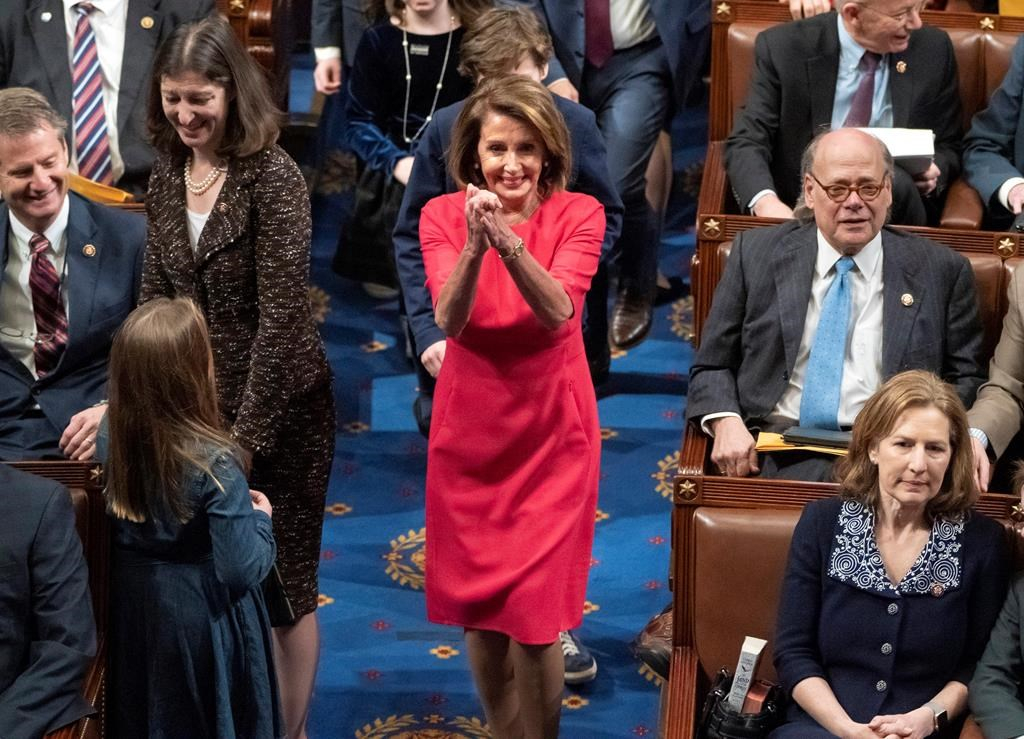 House Democratic Leader Nancy Pelosi of California enters the chamber as the House of Representatives assembles for the first day of the 116th Congress, at the Capitol in Washington, on Thursday, Jan. 3, 2019. Photo by The Associated Press/J. Scott Applew
Previous story

Nancy Pelosi, a veteran Democrat brawler and vocal critic of Canada's trade agreement with the United States and Mexico, resumed her role Thursday as Speaker of the U.S. House of Representatives, becoming the first woman in history to hold the gavel twice in her political career.

Pelosi presides over a diverse collection of representatives — the 116th Congress includes 102 women in the House and 25 in the Senate, a new record, and also sets new thresholds for black, Hispanic, Muslim, Indigenous and LGBTQ members — that is girding for battle with U.S. President Donald Trump.

"I now call the House to order on behalf of all of America's children," Pelosi said after summoning her grandkids to the podium, along with countless other young ones who were in the chamber to see family members take the oath of office.

Before she did it, though, she put the White House on notice that the new Democratic majority in the House was no accident.

"Two months ago, the American people spoke, and demanded a new dawn," Pelosi said. "They called upon the beauty of our constitution: our system of checks and balances that protects our democracy, remembering that the legislative branch is Article I: the first branch of government, co-equal to the president and judiciary.

"They want a Congress that delivers results for the people, opening up opportunity and lifting up their lives."

Even so, many Democrats feel disinclined to give Trump even an inch of breathing room. That has sparked concern that the hard-won new U.S.-Mexico-Canada Agreement, the presumptive successor to NAFTA that's still awaiting legislative ratification in all three countries, could hang in the balance as the president learns for the first time what it's like to govern without Republicans in control of Congress.

Thursday's proceedings also made history in a bleaker way, marking the first time that Congress has been sworn in under the shadow of a partial government shutdown — the result of an ongoing standoff with the White House over funding for Trump's long-promised wall along the southern border.

The president summoned reporters to an unannounced White House briefing Thursday, only to reiterate his position on funding the wall and to introduce a host of border-security and immigration officials who expressed support for his hard line.

In an interview with NBC's "Today" show earlier Thursday, Pelosi said it remains an "open discussion" whether it's possible to indict a sitting president, a hot topic in Washington given special counsel Robert Mueller's ongoing investigation of ties between the Trump campaign and Russia. Justice Department guidelines say such an indictment would be unconstitutional.

"I do not think that that is conclusive," said Pelosi. "I think that is an open discussion in terms of the law."

And while she allowed that it would not benefit the U.S. to seek to impeach a president purely for political reasons, Pelosi refused to rule out the possibility that the Democrats would take up impeachment proceedings at some point.

All of which could bode ill for USMCA, given the Democrat ambivalence it inspires. The agreement includes elements aimed at the centre-left members in Congress, including environmental protections and a requirement that by 2023, 45 per cent of auto parts be made by workers being paid at least $16 an hour. Mexico must also pass a host of labour-law reforms that support and protect women, unions and migrant workers.

But to critics like Pelosi and other powerful Democrats, it lacks teeth.

"The idea that we're going to be able to get a trade deal through Congress when we can't even keep the government open — I think that should level-set expectations for the prospect of USMCA in 2019," said Dan Ujczo, an Ohio-based trade lawyer and partner in the firm Dickinson Wright who specializes in Canada-U.S. business.

Canadian Ambassador David MacNaughton, whose outreach efforts were heralded as key in securing USMCA, will be back at it later this month, working to convince lawmakers on Capitol Hill to support the deal — and also to convince the White House to exempt Canada from its punitive regime of steel and aluminum tariffs.