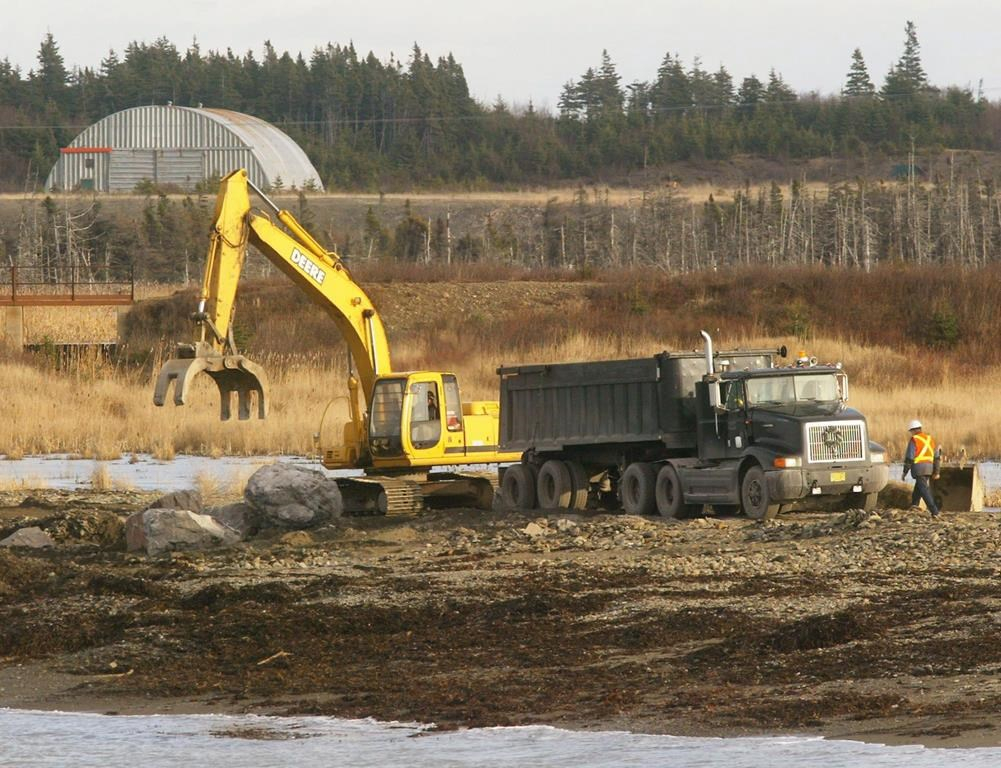 Workers repair the road leading to the Donkin coal mine in Donkin, N.S., on Monday Dec. 13, 2004. File photo by The Canadian Press/Andrew Vaughan
Previous story
Next story

Operations have been suspended at Cape Breton's Donkin coal mine after a "roof fall," the latest in a string of incidents since last July, according to the provincial Labour Department.

None of the mine's 128 workers were inside at the time of the Dec. 28 incident, but work has been suspended until the company, Kameron Collieries ULC, completes an expert review of operations and set of recommendations for the Labour Department's approval.

Scott Nauss of the Labour Department said the province's only underground coal mine — its twin tunnels extend three kilometres under the Atlantic Ocean — has seen six roof falls since July.

The department revoked the mine's ground control permit after the latest incident because the root cause wasn't immediately apparent and because of the recurring pattern.

"Safety is a top priority for my department and coal mining, as you know, is a high risk industry and we are treating it accordingly," Nauss said in an interview.

Nauss said roof falls have different levels of risk depending on where they occur in the mine and how much material falls. For example, roof falls in a mine's travel pass have more easily identifiable root causes.

Nauss said he couldn't provide information on how much material fell from the ceiling on Dec. 28, and where exactly the incident happened inside the mine.

There is no current timeline for when the mine will submit its review to the department. Nauss said it's up to the company and its ground control expert to complete the work.

Mine spokesperson Shannon Campbell issued a statement describing the incident as "certain adverse geologic conditions beyond our control."

"We have contacted experts in this field to assist us in conducting a thorough evaluation of the mine plan and, if necessary, revise these plans and procedures," the statement read.

"While we hope we can resolve this matter quickly and get back to work, our top priority as always, is the safety of our employees and contractors."

The mine's workers are not unionized and the company declined to comment on whether they will receive compensation while operations are indefinitely suspended, "out of respect for personal privacy."

The Donkin mine resumed operating in 2017, promising well-paying jobs for the economically depressed region, but it has grappled with environmental criticisms and concerns about working conditions since then.

During the first three months of operation, Nova Scotia's Labour Department issued 10 compliance orders and 29 warnings for violations of workplace safety and underground mining regulations, according to the Cape Breton Post.

Less than a year into operations, news broke that 49 workers at the mine had been let go with eight weeks pay.

In a statement Thursday, Tammy Martin of the provincial NDP called for a miners' union to better protect the workers' health and safety.

"It's awful to think about what could have happened if there had been workers in the mine when this roof collapsed," Martin said.

"Repeatedly, the Liberal government has only reacted to health and safety issues after they happen, rather than stopping problems before they start. It's only a matter of time before someone gets hurt."