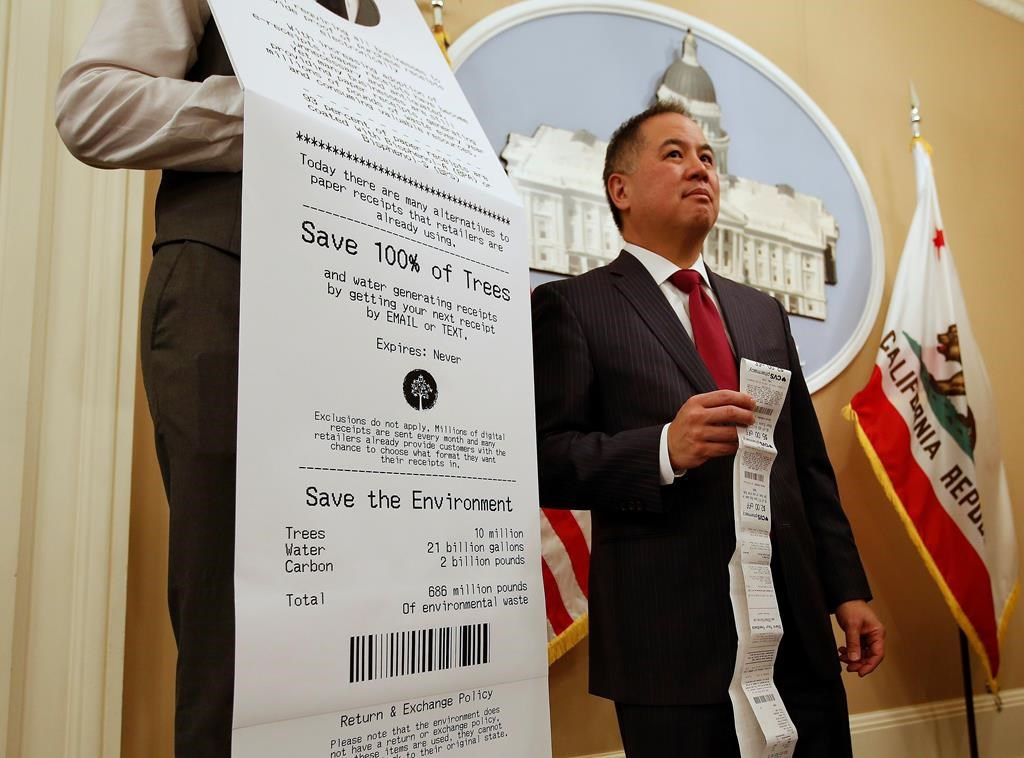 California would become the first state to require businesses to offer electronic receipts unless customers ask for paper copies under legislation proposed on Tuesday.

But he said a law still is needed because many consumers don't realize most paper receipts are coated with chemicals prohibited in baby bottles, can't be recycled and can contaminate other recycled paper because of the chemicals known as Bisphenol-A (BPA) and Bisphenol-S (BPS).

His bill, AB161, would require all businesses to provide proof of purchase receipts electronically starting in 2022 unless the customer asks for a printed copy.

The penalties in Ting's bill are modeled on the straw bill, said Nick Lapis of Californians Against Waste. It calls for written warnings for the first two violations and a fine of $25 a day for subsequent infractions, with a $300 cap.

"It's intended to be a pretty light touch in terms of enforcement," Lapis said.

Advocates said the use of straws is declining after that law was passed.

Many larger stores already offer the choice involving receipts but it is unclear if a mandate would cause a hardship for small and medium-size stores, said California Retailers Association spokeswoman Pamela Williams. Her association and the California Chamber of Commerce have not taken positons on the bill.

Ting said businesses can save money by moving away from printed receipts.

The advocacy group Green America, which is pushing a "skip the slip" campaign, estimated that millions of trees and billions of gallons of water are used annually to produce paper receipts in the United States.

Ting cited studies by the Environmental Working Group and the Centers for Disease Control and Prevention that retail workers have higher concentrations of BPA or BPS than those who do not have regular contact with receipts.

Ting said consumers can still request paper receipts if they are worried about giving out their email addresses for privacy reasons or to avoid having their emails used or sold for marketing purposes.