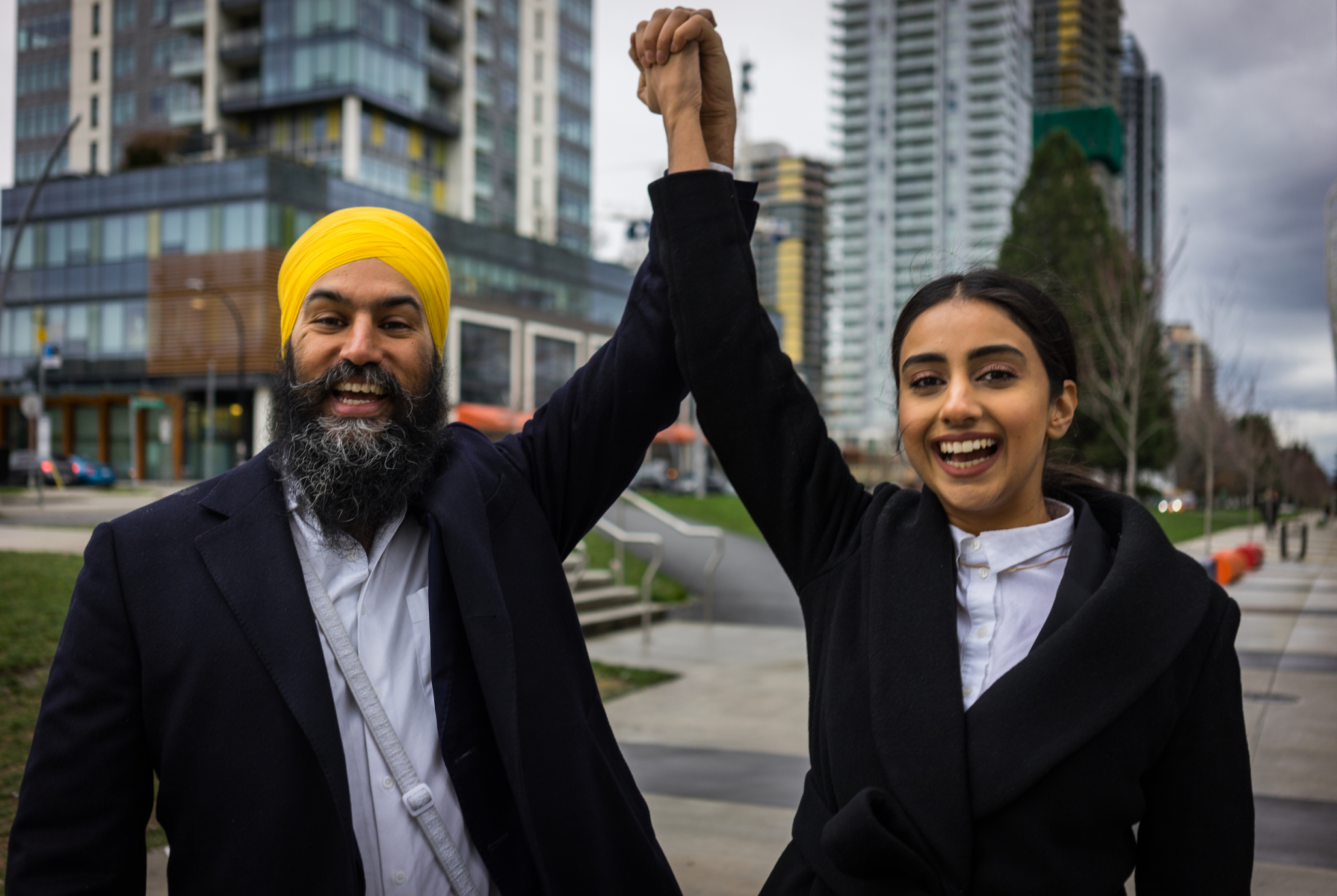 Jagmeet Singh and his wife Gurkiran Kaur Sidhu appear at an even in Burnaby on Jan. 9, 2019 at the start of a byelection campaign. Photo by Michael Ruffolo
Previous story
Next story

The leader of Canada's federal New Democrats, Jagmeet Singh, was out on the campaign trail in the Burnaby South riding he is seeking to win on Wednesday, hours after the Trudeau government called a February byelection there and in two other ridings.

Singh, a lawyer by profession who has spent much of his political career in the greater Toronto area and in provincial politics, won the leadership of the federal NDP in October 2017 but has yet to sit at Parliament Hill. He announced in August he would contest the Burnaby South seat on the outskirts of Vancouver.

It is not a sure thing that Singh will win the seat, which he will contest against an as-yet-unknown Liberal candidate and against Laura-Lynn Tyler Thompson, one of the first candidates Maxime Bernier's People's Party of Canada has put up for public office since he split from the federal Conservatives in 2018. The Tories have not said if they will enter a candidate.

If he loses it, Singh will have a hard time retaining NDP leadership, according to a particularly blunt assessment of the current NDP leader from the one he replaced, Tom Mulcair.

Jagmeet Singh gives his reaction to the byelection announcement at Metrotown Skytrain Station in Burnaby, on Jan. 9, 2019. Video by Michael Ruffolo

Singh had accused Trudeau of delaying the byelection to keep him sidelined as the overall federal election campaign looms, while also quickly turning to his oft-repeated message that the Liberal leader has failed to address the needs of voters for affordable housing and medications.

"The wait is finally over," he told a crowd of supporters and reporters, after the prime minister said votes there and in Ontario's York-Simcoe and Outermont in Quebec will take place on Feb. 25.

“Every issue you look at which matters to the people of Burnaby South, the options are clear. You’ve got Liberals, status quo, telling people to wait. Conservatives that are saying people that "these things don’t matter," they’re not ready to take the action that people need. Or New Democrats who are in the corner of the people fighting for them.”

In Burnaby, @theJagmeetSingh, says that Prime Minister Trudeau has failed to address needs of voters for affordable housing and medications. #2019elex #cdnpoli

He did not address Bernier or his new party's candidate directly -- who have expressed support for limited immigration and opposition to abortion and transgender rights, respectively -- but did seek to present himself as a progressive voice from outside of the status quo.

"The time for timid is over...The people of Burnaby South are done waiting. We demand a government that puts people first. We will force this government to make the choices that will improve the lives of Canadians. We will build a better Canada where no one is left behind," as staffers and supporters ended the event with a cheer.