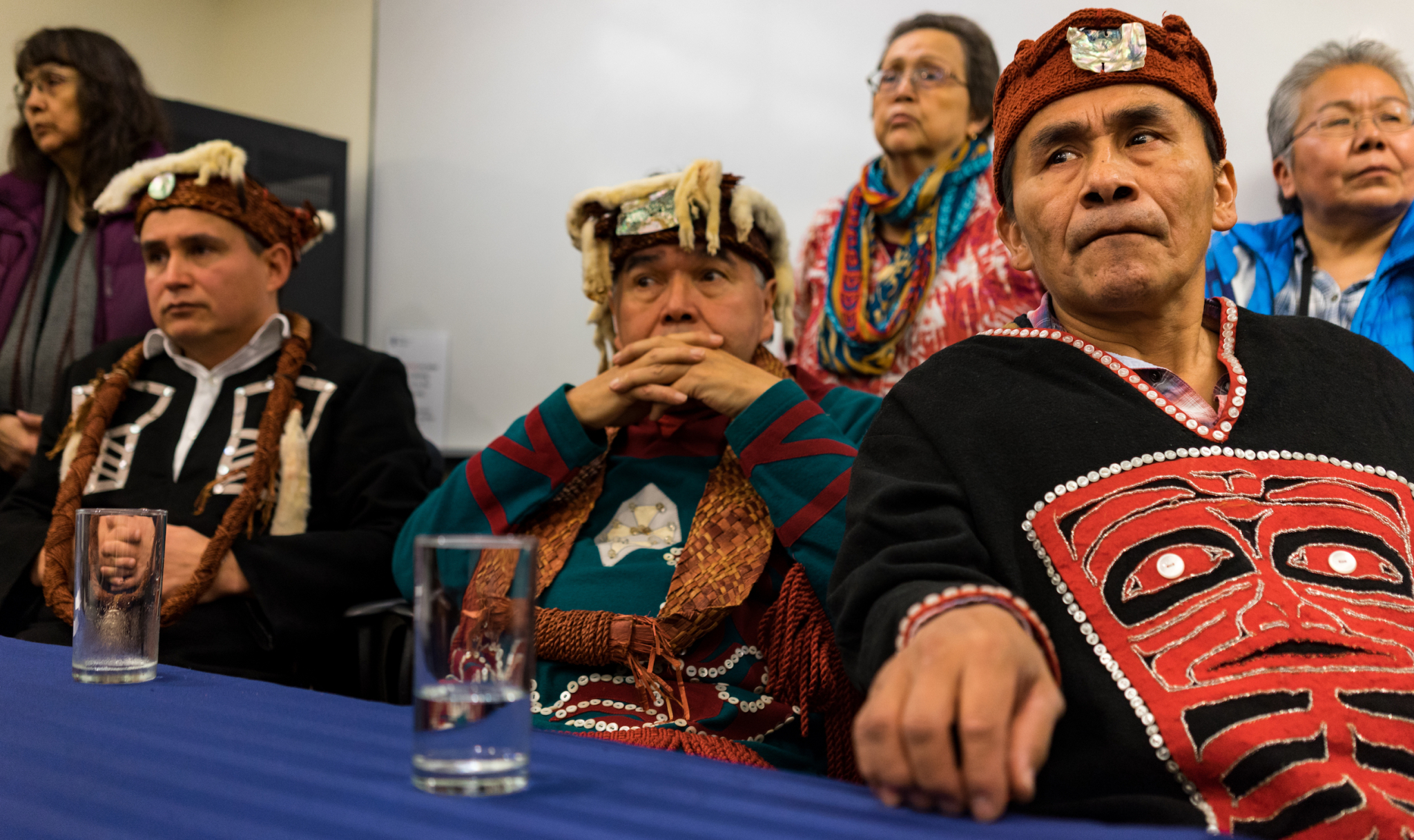 Members of the Dzawada'enux First Nation (left to right) K'odi Nelson, Don Willie and Joe Willie, traveled this week to Vancouver to file a lawsuit against Canada. Jan. 10, 2018. Photo by Michael Ruffolo
Previous story
Next story

Dzawada'enuxw First Nation community members, including matriarchs, elected and traditional leaders, and artists, were in Vancouver Thursday to announce their decision to sue the Government of Canada.

The First Nation, from Kingcome Inlet, B.C., filed a statement of claim in federal court in Vancouver on Thursday, arguing the federal government authorized licenses for fish farms operating in their waters, without their consultation or consent.

The claim says the fish farm operations pollute and poison wild salmon and infringe on the nation's constitutionally protected rights. Their case is the first ever rights-based challenge to the federal licensing process that fish farm companies rely on to operate along the coast of B.C.

According to the statement of claim, the federal government did not consult the community or gain consent for 10 open net pen fish farms, infringing on the nation's "Aboriginal rights," protected under Sec. 35 of the Constitution Act. The fish farms are said to harm their waters and profoundly impact wild salmon populations, sea life, animal life, and the Dzawada'enuxw Nation community's way of life. Claims have not yet been heard in court.

"Our salmon stocks continue to decline rapidly and soon I fear the very possibility that our salmon will be no more. It is a keystone species and its decline impacts us on so many levels," said Faron Soukochoff, elected chair of the Dzawada'enuxw First Nation at a press conference on unceded Coast Salish territories Thursday morning. 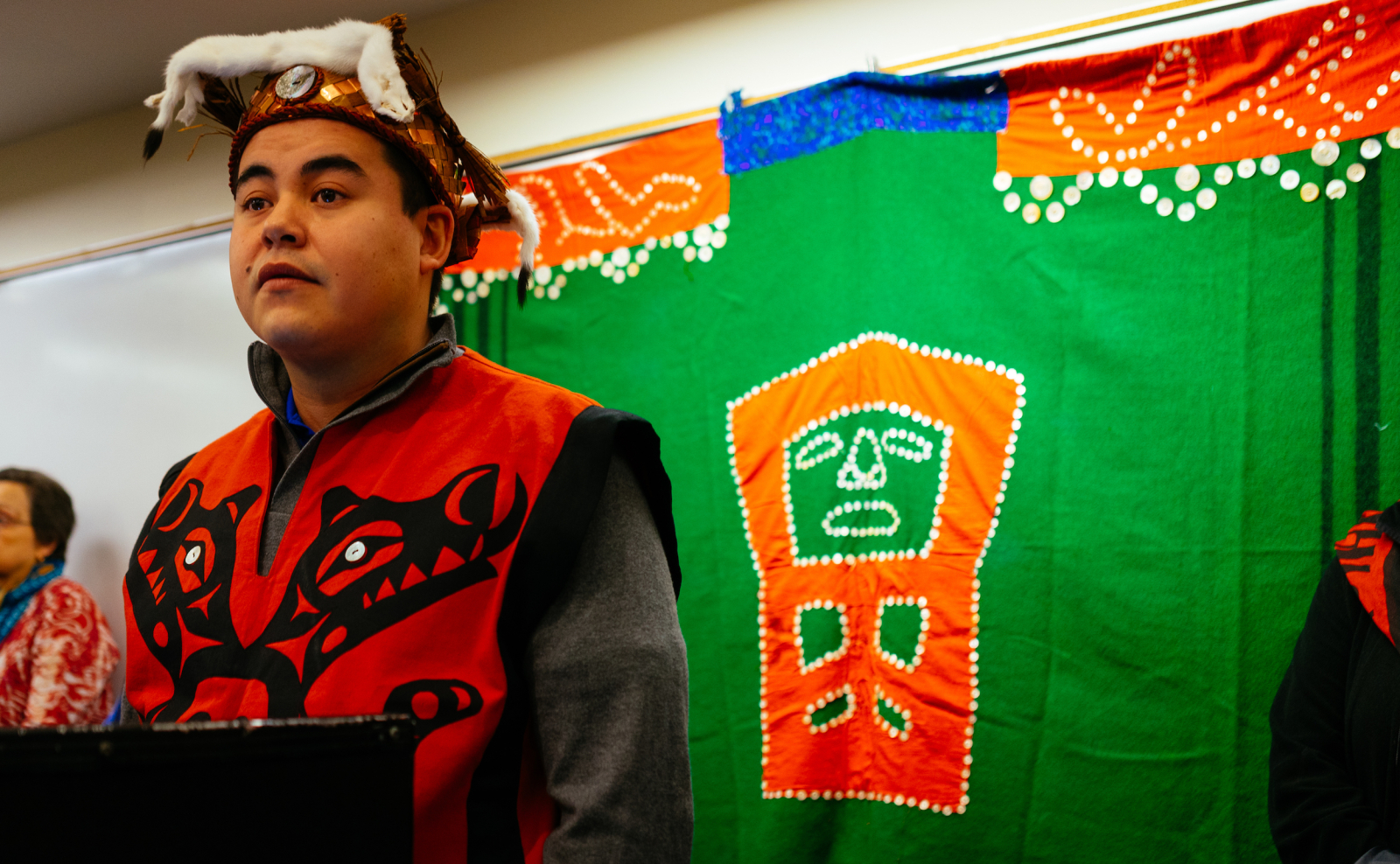 Faron Soukochoff said the legal action taken on Jan. 10 was on behalf of their children and future generations who have the right to enjoy the same opportunities his people fight to protect today. Photo by Michael Ruffolo

Soukochoff was one of five speakers at the press conference announcing the Nation's groundbreaking decision to take Canada to court for infringing on their constitutionally protected Aboriginal rights, which are further supported by the United Nations Declaration on the Rights of Indigenous Peoples.

"Everything in existence has a perfect balance, a symmetry," said Soukochoff.

"Casting aside all that we hold dear in the pursuit of the almighty dollar throws off that balance, bringing chaos to order. I was raised on the land and water and taught to respect all of the creator’s creation — the animals, the sea, the land, Mother Earth, and I will teach my sons and my grandchildren the same teachings, to show them that perfect balance, the symmetry, and why we must do all we can to take care of what has been bestowed on us as First Nations people, as human beings.” 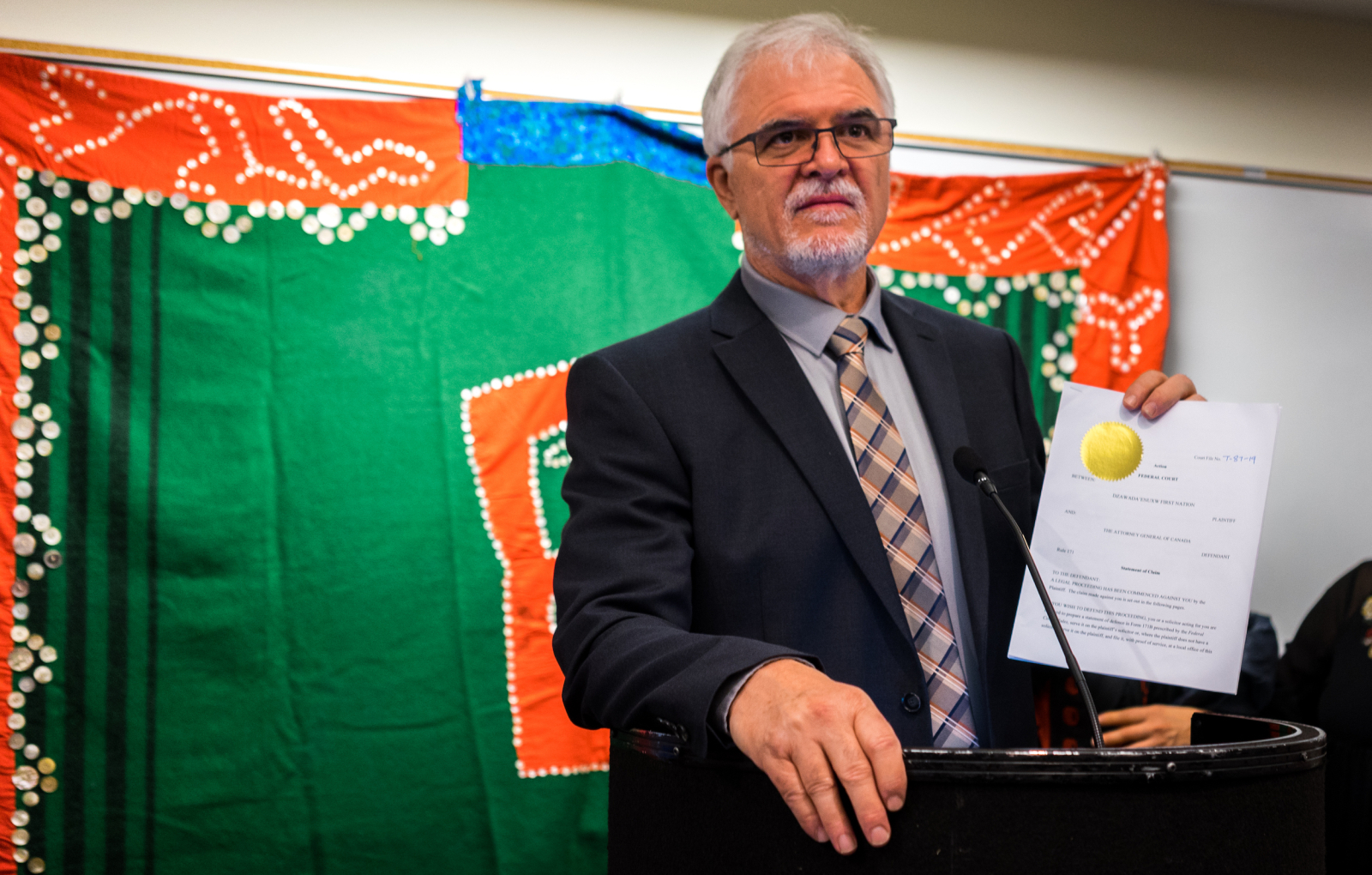 "It’s an honour to be here and stand in the footsteps of the great people that have gone before us in all of these other proceedings that have laid the foundation for this case," lawyer Jack Woodward said at the Jan. 10 press conference in Vancouver. Photo by Michael Ruffolo

The nation's lawyer, Jack Woodward, said the lawsuit was the latest in a series of important legal actions undertaken by the Dzawada'enuxw First Nation in the last year. In June, the nation sought an injunction to stop the renewal of licenses of nine fish farms owned and operated by companies Marine Harvest and Cermaq. The claim made Thursday goes beyond the provincial government's authorization of the location of the pens, straight to the federal government's licensing process under Fisheries and Oceans Canada.

The farms, Woodward said, were licensed, constructed and operated despite no consultation with the Dzawada'enuxw First Nation.

"That's just not legal under Canadian law," Woodward said, referring to Sec. 35 of Canada's Constitution Act, as well as the development of the definition, scope and application of Indigenous rights through groundbreaking cases like the Sparrow case, the Delgamuukw case, and the Tsilhqot'in title case, which Woodward worked on in 2014.

The R v. Sparrow (1991) case involved Musqueam member Ronald Sparrow's defense against a charge of violating the Fisheries Act by using a fishing net longer than his food-fishing licence permitted. For six years, Sparrow argued that the right to fish was a right protected by Sec. 35 of the Constitution Act, 1982, and he eventually won. Sparrow set a precedent for the Dzawada'enuxw claim, Woodward said, clearly indicating that Canada must respect Aboriginal rights and must not pass laws that infringe on those rights.

The 2014 groundbreaking Tsilhqot'in case, which lasted 25 years in court and upheld the nation's Aboriginal title to five per cent of their traditional territory, showed First Nations and Canada that rights-based cases can advance, said Woodward, not only as a defense to a charge, but proactively based on a territory. .

"Tsilhqot'in declared there is a territory wherein Aboriginal rights exist. That's why this claim filed this morning has a map attached, showing the territory where the Dzawada'enuxw First Nation has rights," Woodward explained. "Any act of any government that infringes (on) those rights is invalid and must be quashed."

Woodward said there is no excuse for any infringement on constitutionally-protected Aboriginal rights and that both the federal and provincial governments know about these precedent rights and title cases and know perfectly well what their obligations are.

"This nation is claiming their Aboriginal rights, they're claiming their title, and they're saying those fish farms violate that title and those rights and they have to go," Woodward said. "These court cases will undoubtedly be successful. This case is against the federal government. There will be a trial, people will testify, the judge will hear the evidence and see the scientific evidence and, we believe, will be persuaded that this is exactly true."

When asked about the lawsuit, Fisheries and Oceans Canada Communications Lead Dan Bate provided a response that neglected to mention the legal action.

"Fisheries and Oceans Canada welcomes the recommendations regarding aquaculture in the Broughton Archipelago set out by the Province of B.C., First Nations and industry leaders," Bate wrote instead in an email. "We are committed to working with the Province of B.C., Indigenous leaders, industry and environmental groups to address the steering committee's recommendations in a manner that is consistent with our new sustainable approach to aquaculture."

Traditional leader of the nation Chief Willie Moon said the legal action represented another historic moment for his people.

"Today we are saying again that we stand up and are taking back our lands, territories and resources," Chief Moon said, emphasizing that the zero tolerance for fish farms in their territories was grounded in direction from the nation's matriarchs, membership and community.

Eddie Gardner, a Stó:lō Elder from the Skwah First Nation, spoke as president of the Wild Salmon Defenders' Alliance Thursday. The alliance will be one of several groups supporting the nation's court case.

"It's long overdue that those fish farms be removed from the migration routes of our wild salmon," Gardner said. Gardner travels annually with the Wild Salmon Caravan, along the route of the wild salmon, meeting with and hearing from the communities affected by the dwindling numbers of wild salmon runs and diseased farmed Atlantic salmon caught in their nets.

Gardner said Canada needs to follow the lead of Washington State, which terminated Cooke Aquaculture's fish farm leases after catastrophic net-pen collapses that released up to 263,000 farmed salmon into the Salish Sea in 2017.

On December 14, 2018, the B.C. provincial government, industry, and the Kwikwasut'inuxw Haxwa'mis, 'Namgis and Mamalilikulla First Nations signed an agreement to shut down 10 fish farms in the Broughton Archipelago in the next three years. While the announcement has been celebrated by some wild salmon advocates and anti-fish farm land defenders, when asked about the agreement, Woodward said it was a set-back for the Dzawada'enuxw Nation.

A document describing the plan was handed out at the Musgamakw Dzawada'enuxw Tribal Council Meeting on Dec. 18, 2018 in Campbell River, where a motion was put forward and passed to vote against the agreement.

"The province extended several tenures within the territory of the Dzawada'enuxw First Nation. Some of those tenures are already involved in a legal challenge," Woodward told National Observer at the press conference. "We already have a legal challenge saying that those tenures are illegal and should be terminated legally and we have a court case likely to be heard in April in which we hope those tenures will be terminated. Yet the provincial government granted extensions to some of those to the year 2024, an additional five years."

Chief Willie Moon said his nation wants all of the fish farms removed from their territories. This is something that wasn't expressed in the December agreement.

"We don't have five years. I'm one of the ones who fish in our rivers. When you're only getting five or six fish a day, that's a warning sign for all of us. That's why we're moving forward with this case, because it's not moving fast enough. We have never given industry the go-ahead to have these farms in our territories."

Chief Ernest Alfred, of the 'Namgis, Tlowitsis and Mamalilikulla Nations played a major role in a 280-day occupation of fish farms in the territories of the 'Namgis Nation in 2017-2018.

"There is confusion about the process with the province," Alfred said. "We're going to try and gather our people and pull apart the agreement and look at it, because many of our members are in the dark and have questions. This isn't really over."

But despite the confusion, Alfred said he remains hopeful, seeing strength in the increased activity and collaboration between elected and traditional leadership, the development of scientific evidence that can be used against the reported benefit of open-net fish farms and the escalation of the defense of Indigenous lands, waters and rights.

"There are little victories here, today being one of them. It's going to take a multi-pronged approach to end the atrocities within our territories."

The Dzawada’enuxw First Nation's defence of a clean environment is to be applauded.... Ottawa's actions to be derided.

This is so encouraging !!

This is so encouraging !! Those salmon farms have destroyed so much :-(