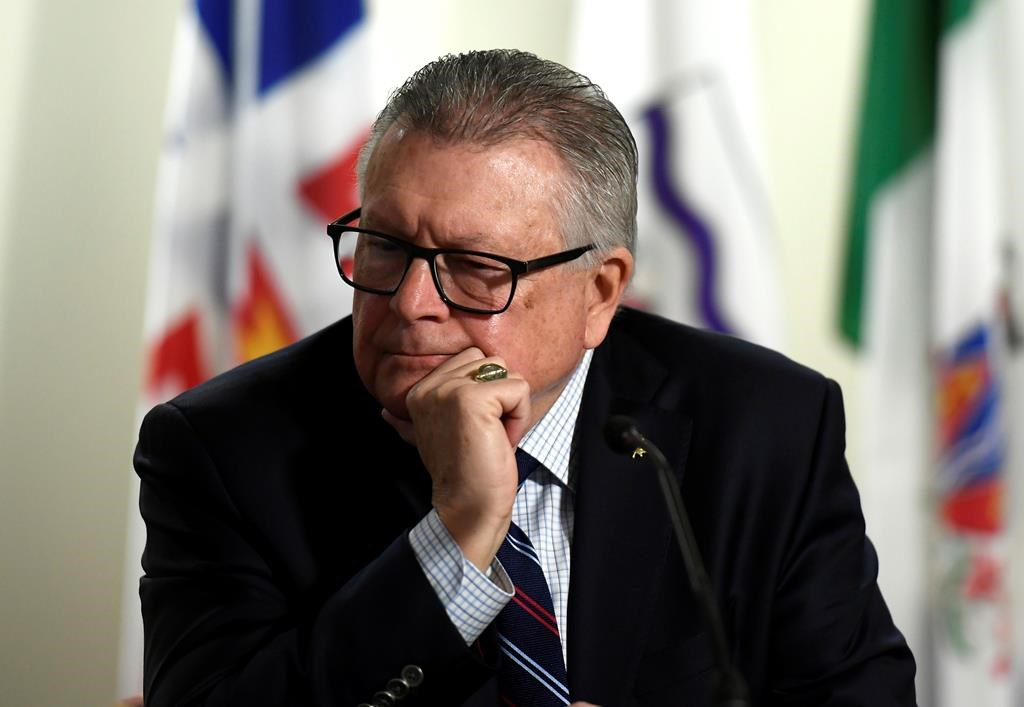 Minister of Public Safety and Emergency Preparedness Ralph Goodale listens to RCMP Commissioner Brenda Lucki during a press conference on the RCMP's new Interim Management Advisory Board in Ottawa on Jan. 16, 2019. File photo by The Canadian Press/Justin
Previous story

A pair of federal cabinet ministers said Monday that Chinese telecom giant Huawei isn't the only company that can build Canada's next-generation wireless networks, as China muted its threat to retaliate if Canada bans the company.

On Monday, a Chinese foreign-ministry spokeswoman attempted to play down the remarks by Chinese Ambassador Lu Shaye to reporters in Ottawa.

"To my understanding, he did not mean that China intends to interfere in the decision-making of the Canadian government," spokeswoman Hua Chunying said in a Monday briefing in Beijing, according to a transcript on the foreign ministry's website.

"We all know that Huawei is a leading supplier in the 5G technology, so losses are inevitable if Huawei is not chosen as a co-operation partner."

Goodale and Bains said that's not necessarily the case.

When asked about the government's ongoing national-security review of Huawei's potential involvement, Goodale said there are other suppliers besides Huawei that can set up Canada's 5G networks.

"There are other suppliers, yes indeed," Goodale said.

Bains named one: "Ericsson is another provider," he said, referring to the Swedish telecom company.

Canadian security agencies are still reviewing the security and technical issues surrounding the potential involvement of Huawei and other companies in new 5G networks for smartphones and other wireless communication devices.

That decision has become more politically charged after the RCMP arrested Huawei executive Meng Wanzhou in Vancouver on Dec. 1 at the request of the United States.

Meng's arrest has infuriated China, which has since detained two Canadians, plunging Canada-China diplomatic relations to a new low. Michael Kovrig, a diplomat on leave, and Michael Spavor, an entrepreneur were arrested on vague allegations of endangering Chinese the national security. A third Canadian, Robert Lloyd Schellenberg, received a death sentence last week for a previous drug-smuggling conviction, a harsher penalty than the 15 years of imprisonment he'd already been given.

Hua said Monday that Kovrig and Spavor were arrested as part of "compulsory measures by relevant Chinese departments in accordance with the law for their involvement in activities undermining China's national security."

Hua added that foreigners visiting China are not broadly at risk. "As long as they abide by Chinese laws and regulations, there is nothing to worry about."

Goodale said while "some people" have linked the detainee issue with the government's decision on Huawei, national security will determine which company Canada picks to build the country's new 5G network. But offered no timeline.

"We will make the best decision for Canada and we will not compromise security," said Goodale. "It's an ongoing exercise and it's exceedingly complicated. This is technology the world has never had before."

Huawei has become the world's biggest supplier of equipment used by phone and internet companies. But the company has faced widespread allegations that is it is an espionage organ of the Chinese military and security services — a charge the company strongly denies.

"Many of these advanced technologies are dual-use in nature in that they could advance a country's economic, security or military interests," said David Vigneault, the director of the Canadian Security Intelligence Service.

"In particular, CSIS has seen a trend of state-sponsored espionage in fields that are crucial to Canada's ability to build and sustain a prosperous, knowledge-based economy," he added. "I'm talking about areas such as A.I., quantum technology, 5G, biopharma, and clean tech."