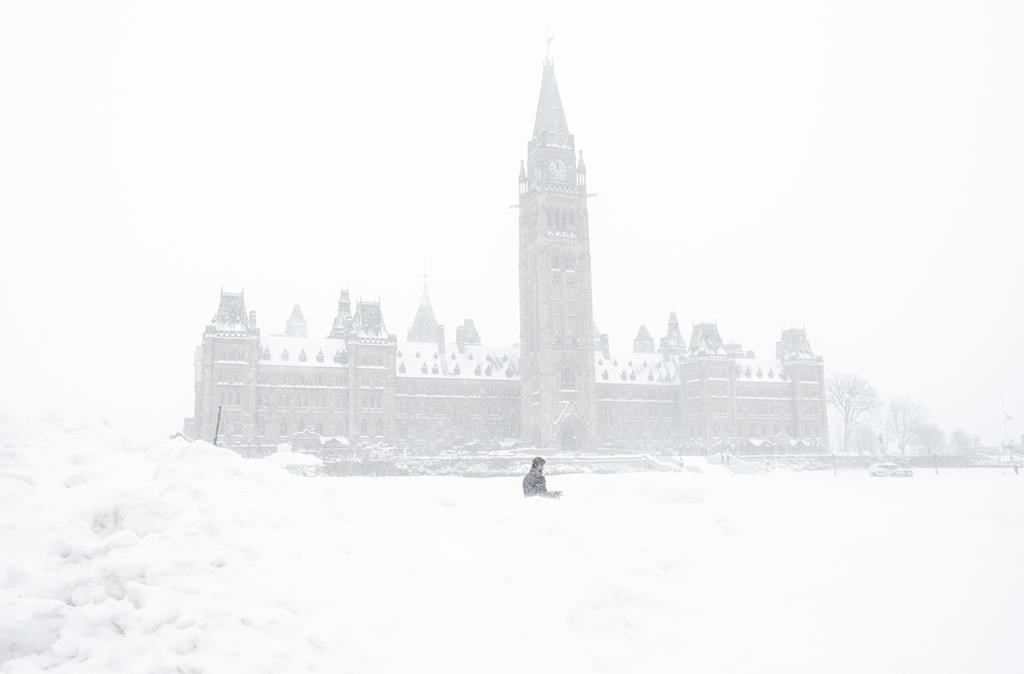 A pedestrian walks past a snowbank on Parliament Hill in Ottawa on Sunday, January 20, 2019. Photo by The Canadian Press
Previous story

A powerful winter storm that brought heavy rain and snow to much of Eastern and Central Canada closed schools, flooded streets, knocked out power and forced school buses to stay off the roads in many areas Monday as temperatures began to plummet.

In Saint John, N.B., some streets were knee-deep in water as a result of heavy rain that followed hours of snow and ice pellets — clogging catch basins.

"This time of the year the water has nowhere to go and if the drains are clogged, the water rises. That resulted in one apartment building being evacuated and a number of cars being abandoned," said Geoffrey Downey, a spokesman for New Brunswick's Emergency Measures Organization.

Many Canadian figure skaters remained stranded in Saint John after the storm hit on the last day of the national skating championships.

More than half of the flights out of the city's airport were cancelled due to the weather.

The Canadian championships brought between 400 and 500 people - skaters, coaches, officials, and various staff members - to the event. Many were forced to extend their stay as they looked for rescheduled flights.

"We've got limited flights for people to change to, and it's still an unknown as to how many flights are going to get out and when," said Terry Sheahan, the senior director of marketing and events for Skate Canada.

In Quebec and Ontario the snow had largely stopped falling, but extreme cold warnings remained in place with wind chills expected to drop to almost minus 40 in Toronto.

Montreal and Ottawa were looking at daytime highs of just minus 15 to 17 with icy wind chills as low as minus 40 where exposed skin can suffer frostbite in just minutes.

Sunday's snow storm caused some flight cancellations at airports across the affected regions, and in Montreal they even cancelled a festival dedicated to snow.

The city said it was suspending the Fete des Neiges due to the snowy, windy and cold weather as well as the dangerous conditions on Quebec's roads.

Weather warnings remained in place in much of the Atlantic region, cautioning that Sunday's nasty storm system could deliver a one-two punch as plunging temperatures cause slush, pooling water and any precipitation to flash freeze.

In Saint John, tow trucks were being used to move stranded cars before they froze in place. Canadian Red Cross volunteers arranged emergency lodging and food for three adults and four children from three units of the evacuated apartment building.

Ian Hubbard, a meteorologist with Environment Canada, said the tracking of the system brought a variety of conditions across the Maritimes in terms of precipitation and temperatures.

"New Brunswick was the hardest hit in terms of snow, particularly northern New Brunswick," he said.

Bas-Caraquet, in northeast New Brunswick recorded 41 centimetres of new snow, while parts of Nova Scotia got up to 15 centimetres snow followed by 30 - 60 millimetres of rain.

Several Toronto school boards, including the Toronto public and Catholic boards, decided to cancel bus service out of concerns that frigid temperatures could delay travel and put students at risk as they wait for pickup.

NB Power reported about 3,000 customers were without electricity, while Nova Scotia Power said about 34 outages were affecting just over 1,100 customers.

Environment Canada was forecasting flurries and ice pellets or freezing rain across New Brunswick would change to snow with winds gusting to 40 km/h, and wind chill temperatures as low as minus 50 Celsius.

Wind and rainfall warnings have been posted in central Nova Scotia, while in Prince Edward Island a flash freeze warning has been issued with rain showers expected to change to flurries.

Newfoundland was dealing with wind and rainfall warnings, with 20 millimetres of precipitation forecast for the south coast, along with 50 km/h winds gusting to 80 and even 100 km/h in some areas.

Summer weather is getting 'stuck' due to Arctic warming