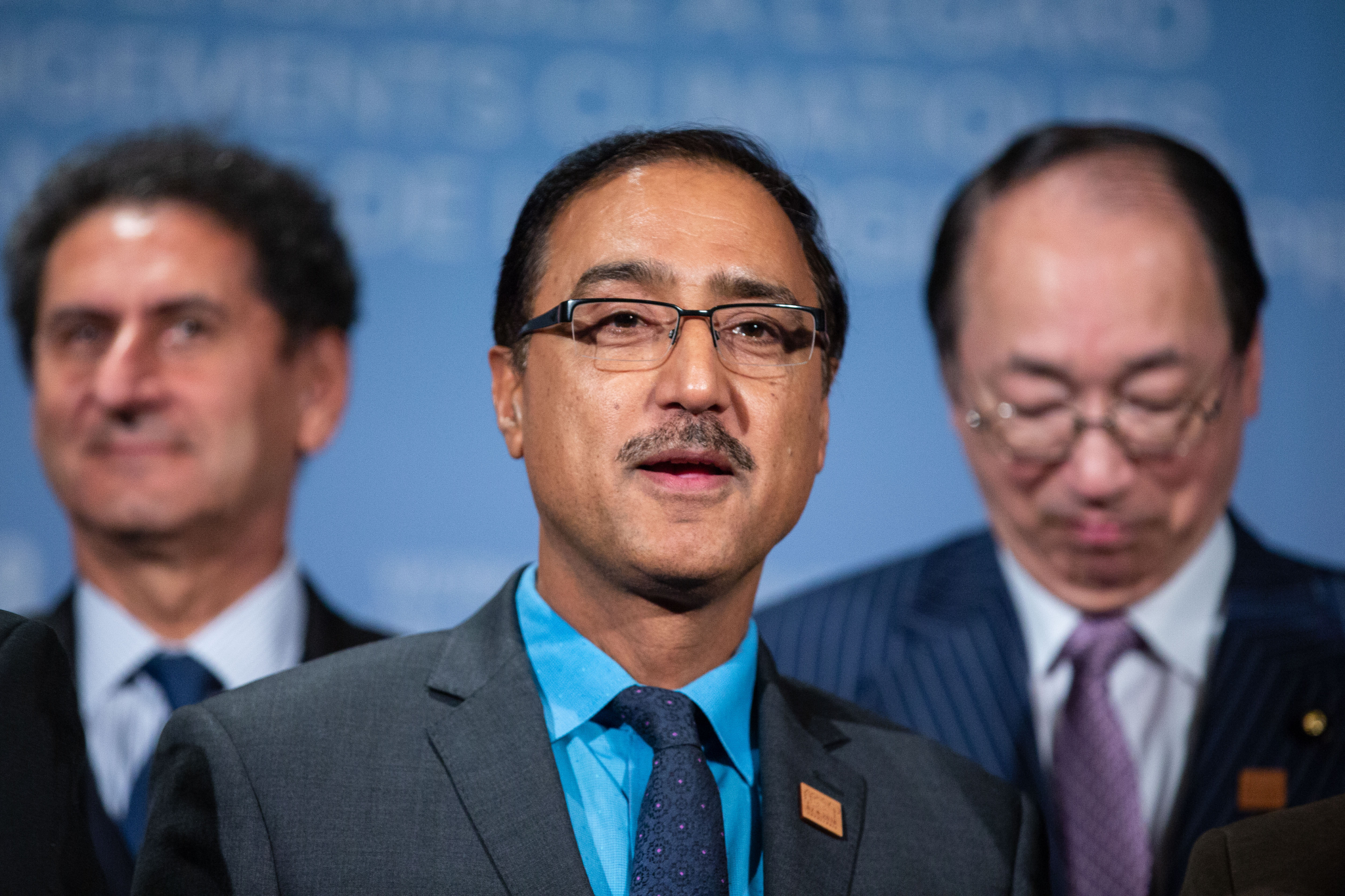 Almost half of the funding in a federal program Canada has promoted as a boon for electric vehicles is being used for natural gas refueling.

The program has been promoted as fulfilling a commitment to put more zero-emission vehicles on the road. Environment and Climate Change Minister Catherine McKenna recently touted the program as part of her announcement on new EV chargers across Quebec.

While there are far fewer natural gas and hydrogen stations than EV chargers, the refueling stations cost much more to install, typically $1 million each, compared to $50,000 for an EV charger — meaning they are sucking up much more program funding per station.

A National Observer analysis shows that, as of Jan. 25, a list of projects being funded under the program for which contribution agreements have been signed showed $6,502,000 had been given out for natural gas refuelling, compared to $7,967,000 for EV charging and hydrogen refueling. This would mean that the government has spent 44.9 per cent of the total program funding on natural gas stations.

High-polluting gasoline and diesel engines dominate Canada’s roads, and transportation accounts for a quarter of Canada’s carbon pollution. Replacing gas-guzzlers with compressed natural gas vehicles could lower emissions, depending on where the gas is sourced from, what fuel sources are being replaced, and the vehicles in question.

Natural Resources Minister Amarjeet Sohi's office says switching from diesel to natural gas in medium- and heavy-duty vehicles can reduce emissions by "up to 25 per cent." Compared to gasoline, compressed natural gas emits six to 11 per cent lower levels of carbon pollution over its life cycle, according to the U.S. Department of Energy. That figure is also cited by delivery service UPS.

Still, electric vehicle advocates feel slighted that a program they thought was advancing the cause of electrification is also being used to fund transportation options that still produce tailpipe emissions.

“As members of the EV community, it is distressing for us to see money spent on compressed natural gas fuelling that will have little to no impact on Canada's greenhouse gas emissions,” said Matthew Eglin, director of the Electric Vehicle Council of Ottawa. “This money would have been better spent on expanding the EV charging network across Canada.”

Sohi's office said medium- and heavy-duty vehicles represent one of the fastest-growing emissions profiles, and using natural gas also reduces other forms of emissions such as black carbon, which has a powerful global warming potential. The black carbon would be a by-product of the pollution from large commercial trucks that run on diesel fuel.

"If there are lower carbon fuel options that will make a difference, we need to act," said Alexandre Deslongchamps, Sohi's director of communications.

"We know that the transition to a low-carbon economy cannot happen overnight. Canada's climate plan was built with Canadians, and is a serious, practical and affordable approach to tackle climate change. We will continue to take action to ensure Canadians across the country have good jobs, a growing economy and a healthy environment."

McKenna’s press secretary Sabrina Kim declined comment, saying Sohi's office was best suited for a response, as the funding was from an NRCan program.

Renewable natural gas to be used at London, Ont. station

Sohi's office also pointed to the introduction of renewable natural gas produced from landfills, farms or other places with organic waste, as a way to further lower emissions.

The department's funding for natural gas refueling is being praised by energy companies and local politicians who are excited about renewable gas, which is chemically similar to natural gas and can be collected, cleaned, put into pipelines and used the same way as homes and businesses use gas now.

NRCan, which has invested in the technology, says renewable gas from a sustainable source could emit up to 85 per cent less pollution than fossil fuels. It is already being deployed along the Highway 401 corridor in Ontario.

In December, an affiliate of Enbridge, Union Energy Solutions, and an industry partner revealed how $3 million in federal funding from the NRCan program “was a critical resource in recognizing the important role that natural gas offerings play in providing affordable emission reduction choices for our country.”

The industry partner, California-based Clean Energy Fuels Corp., designed and built three compressed natural gas stations in Ontario near Windsor, London and Napanee. The firm says its renewable gas, branded as Redeem, has “up to 70 per cent reduction in greenhouse gas versus diesel and gasoline.”

The London station will use renewable natural gas sourced from nearby biogas facility StormFisher Environmental, the two companies said. StormFisher says its 2.85 MW biogas facility, which converts 100,000 tonnes of organic waste a year into renewable energy and fertilizer, avoids enough pollution equivalent to taking 7,500 cars off the road.

A local Liberal MP, Peter Fragiskatos, who is the Member of Parliament for London North Centre, was quoted in the Union Energy / Clean Energy Fuels press release as stating that “these stations provide transport companies with cleaner options to move their goods — cutting costs, reducing pollution and improving productivity.”

The Ontario government of Premier Doug Ford is also backing the project: Agriculture Minister Ernie Hardeman was quoted in the same press release, stating that he was “proud” his ministry was part of the project, and that it was an “investment in our future.”

Meanwhile, the 102 electric vehicle charging stations that are being funded by the program are spread out across the country in B.C., Alberta, Manitoba, Ontario, Quebec, New Brunswick and Nova Scotia.

I'm concerned that this

I'm concerned that this expensive infrastructure is being put in for fuel that is not truly "renewable". We need to deal with waste and farming in ways that no longer produce methane. And the methane should be used for higher uses than transportation. My suspicion: this infrastructure will make Canada dependent on fracked gas. We need conservation & renewables, not more spending on fossil fuel infrastructure.

I disagree, Jan. I agree with

I disagree, Jan. I agree with your point that we should take steps to reduce our methane production, but we will inevitably produce methane. The question then is, what to do with it? Is it permitted to return to the atmosphere where it has a much higher global warming potential than CO2? Or could we instead make use of that resource turning in to a gas of sorts, that when combusted, reduces the global warming potential of the gas, and reduces the need to extract fossil fuels from the ground. RNG should be an important part of our low-carbon economy. The challenge is that it is really really expensive relative to conventional NG. The government could play a key role in a) setting a minimum standard (e.g. 20% of mix had to be RNG by x date), and b) funding development of expensive sites, changing the calculus for developers. Its not just agriculture, but waste-water treatment sites and landfills offer good sources for this too. In Canada, our biggest carbon pariahs are transportation and thermal energy. RNG can be a big help to reducing our thermal energy GHG footprint.

Mm. We need to do something

Mm. We need to do something with it, and yes that probably means burn it. But we should do that in a way that minimizes leakage, because every bit that leaks gives us 30+ times the warming effect of a bit we burn. To minimize leakage, we'd want to minimize pipes and such. So either use it in a pretty centralized way or, if decentralized, burn it at the point of production.
Use in vehicles via a far-flung distribution network would be exactly the worst way, from which we could expect the greatest leakage. And really, for most road vehicles electric is the future; why do we need to be building an expensive duplicate infrastructure network that won't even get used, at government expense?

Here in BC Mr. Horgan has

Here in BC Mr. Horgan has stated that he wants residents off of natural gas and back to BC Hydro. Most of us converted to natural gas because of hydro's obscene two tier pricing and encouragement to do so from both government and BC Hydro. Sidebar? BC Hydro have promised not to give any breaks for their excessively high prices for residents conversion back to them. Horgan's vision? A burgeoning LNG/Fracking industry supplying the world with unnatural fracked gas but off limits to residents of Canada. This way he kills two birds with one stone. Residents sudden dependency on BC hydro gives credibility for Site C's apparent need. Incredible.....and disgusting. Are we surprised? Not in BC...no matter the government, corruption is never very far away.

I think Horgan is wrong about

I think Horgan is wrong about that stuff, but I don't think he's corrupt. After all these years of the Liberals it's pretty understandable that the first thing one would consider as an explanation is corruption, because those dudes were, and are, corrupt to the hilt, so saturated with corruption that it oozes out of every pore. But the NDP have been pretty convincing in their moves to push money out of politics and make money laundering more difficult; I don't think they are significantly corrupt. Just a bit too easily convinced and/or intimidated by conventional wisdom about markets and whatnot. He's still wrong though.

As to Site C . . . well, if we're really going to move to electric vehicles and, ideally, to electric heating rather than natural gas heating, we actually are going to need a lot more electricity than currently projected. Not that Site C would necessarily be the best place to get that electricity, but I've always found environmentalist arguments that we don't need site C BECAUSE we won't be needing more electricity, to be incoherent. If we turn out not to need more electricity, it'll be because we lost on everything else.
I don't think Horgan was happy about Site C; he just concluded, perhaps wrongly, that the Liberals had successfully made so many commitments and spent so much money, sunk so many costs, that it was too hard to back out. I did not get the impression he'd have started it from scratch.

It saddens me to see this

It saddens me to see this support going to LNG re-fueling stations. The RNG support is great, but I wonder how much of that "half" is going to RNG. But, I'm not surprised. This has been the Canadian governments M.O. for decades; masquerading support for oil and gas as "sustainability" initiatives. Most of sustainable development technology Canada's (SDTC) support since it's inception has gone to projects and technologies that are designed to enhance and improve the extraction of oil from the tar sands. That might be a good story worth following up on...

So one of the 7 natural gas

So one of the 7 natural gas stations will use bio-gas; the remaining six will compete with the LNG industry for fracked gas which is as bad as coal on a full life cycle basis.

I am billed by the GJ for the bio-gas I use for home heating/hot water; burning 1 GJ of gas yields 49.8 kg of CO2 irregardless of its source. There are other benefits of bio-gas which I willingly pay a premium for but conflating fracked gas with bio-gas is dishonest.

I agree with Mr Eglin, the money should be exclusively dedicated to DC fast chargers.

Although it sounds good and I

Although it sounds good and I do understand the transitioning element to a fossil free energy, the cost of putting in natural gas stations is just so expensive. And of course the whole idea is to get the big commercial trucks on board in lessening their emissions. However I am not sure the short term use of these stations vs the cost or the benefit of lower emissions will justify the resources spent. May make more sense subsidizing commercial trucking to go electric and or subsidizing research and innovation into super batteries for big trucks etc. The federal government is still subsidizing oil companies ????