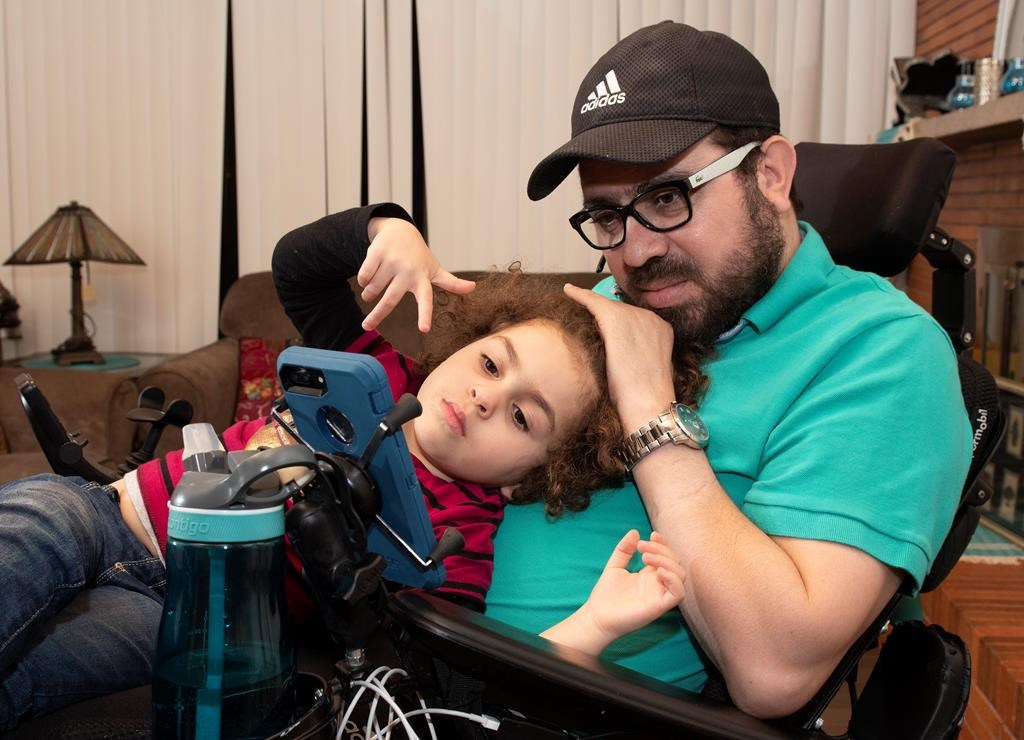 Aymen Derbali enjoys some quality time with his daughter Maryem in their home, in Quebec City, on Thursday, Jan. 24, 2019. Photo by The Canadian Press/Jacques Boissinot
Previous story
Next story

The 42-year-old was one of more than 50 people attending evening prayers when a shooter opened fire on Jan 29, 2017, killing six people and wounding several others including Derbali. He was left paralyzed from the waist down and uses a wheelchair to get around.

After a long and painful recovery, Derbali said he's now in a better place.

Last summer, he was able to move out of the rehabilitation centre where he'd lived since the shooting and into a new wheelchair-accessible home that was bought for him after a fundraising campaign raised more than $400,000.

While his own plans are unsure, he said he is grateful for the support he has received, and grateful he'll be able to watch his three children grow up.

"My future is for them now," he said in a recent interview.

For Said Akjour, who was shot in the shoulder, recovery has been a slow process.

He remembers everything: crouching in an alcove with his "brothers," watching Derbali get shot, the bullet that pierced his own left shoulder "like an arrow," and the fear in the eyes of the responding police officers.

"There were many bullets, and time was like an eternity, even if it's only two minutes," he said.

Akjour had to undergo a year of physiotherapy, and his arm still bothers him sometimes as he carries out physical tasks at the seniors' care facility where he has returned to work part-time.

He has also struggled with feelings of shame, helplessness and guilt.

"Why didn't I do more?" he said. "It was a feeling that was present. It was changing between gratitude at being alive, but at the same time, brothers were dead."

Akjour, 46, said his recovery was made easier by writing Arabic poetry and by the solidarity he felt from colleagues, family, and the public.

He briefly considered moving to Ontario, but decided to stay, in part because he feels it's his responsibility to talk about what happened. "In 10 years, will there be (the victims' children) coming to ask me about how their father died?" he said. "I will be here to pass on memories."

Mohamed Yangui, a former president of the mosque, is worried about the message broader society is sending to Muslims.

He feels let down by the new provincial government's plan to ban religious face coverings for public servants in positions of authority, which he said targets Muslim women. And he is troubled by the rise of right-wing, anti-immigrant sentiment.

After guiding the mosque through the tumultuous year following the shooting, he said he's too tired and sad to go back to a place that is haunted by painful memories.

Another former president of the mosque is hopeful things are slowly "returning to normal" at the Islamic Cultural Centre.

The bullet holes in the wall remain, and some people are still fearful no matter how many new security measures are brought in. But Mohamed Labidi said hateful incidents directed at the mosque have declined significantly in the last year, and the community continues to receive messages of solidarity from across Canada and the world.

"It's still a trauma for the community, and there are people who have been weakened," he said in an interview at the mosque. "But there is a big dose of resilience in our lives, in our principles. It is a fundamental part of our religion."

Labidi said the Feb. 8 sentencing of Bissonnette will be an important moment in the community's recovery. The killer faces a potential prison term of 150 years before being eligible for parole if a judge decides the six life sentences should be served consecutively.

Labidi said the community is "waiting for justice" and is "almost unanimous" in believing that a 25-year sentence would not be enough, considering six lives were taken. "Each life is important," he said.

Labidi said the mosque is slowly moving from a recovery phase towards creating a legacy for the victims. The rooms in the building are being renamed, one for each of the six men who died.

And the administration has worked with the city on a new, more permanent memorial to be announced in the coming days. It has also spoken out in support of the province's new long-gun registry and called for stronger background checks for those seeking gun permits.

Some of the other victims' loved ones have begun initiatives of their own. The Quebec Guinean Association began a fundraising campaign to dig wells in the African hometown of the two Guinean victims, Mamadou Tanou Barry and Ibrahima Barry, according to association member Souleymane Bah. So far, the $36,000 project is about half funded.

And Labidi said the mosque is still committed to outreach, both hosting and attending events designed to build bridges with other communities.

"Everything we do is to show that from this bad, we will germinate good," he said, "not just for us but for all of society, for Quebec and for Canada."

I feel for all these victims.

I feel for all these victims. The terrorist better be locked up forever. And those who fed their hate to him should be outed too in the sentencing.