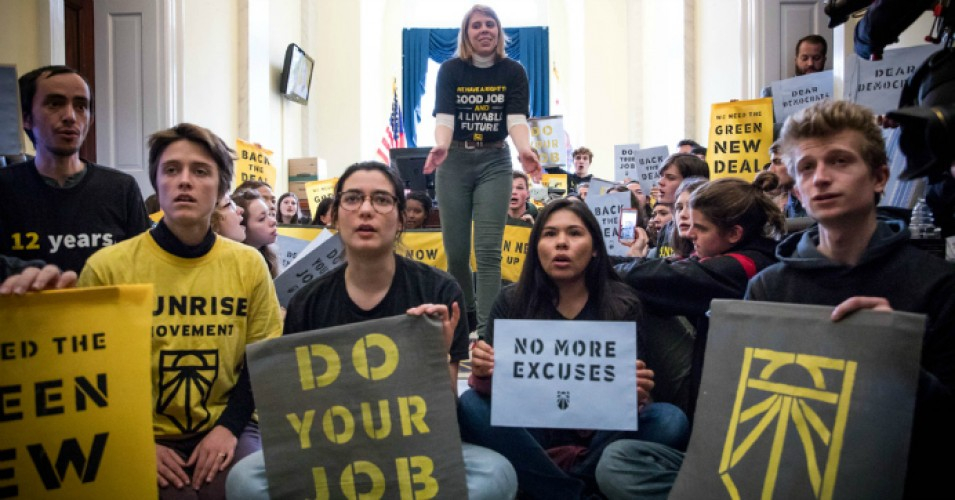 Carl Shoupe, a 71-year-old who lives in Benham, Kentucky, at the foot of the tallest mountain in the state, does not feel well served by America.

When he came back from Vietnam, he went to work in the coalmines. At 22, he was nearly killed by a roof collapse.

He spent a year on his back in the hospital. When he was mobile again, he got a job with the United Mine Workers Union. But after 12 years his injuries flared up and he had to quit. Then Vietnam memories started coming back, and he took to alcohol and pills.

“I was a wasted man for several years,” he recalled.

In September 2005, everything changed. He went to church and got sober. When his mind was clear, he didn’t like what he saw.

“Man,” he said, “I seen all this destruction the coal companies were doing, tearing the mountains down.”

Since then, Shoupe has worked with Kentuckians for the Commonwealth, a grassroots environmental and social justice group that wants to do things like insulate old camp homes and use the energy savings to pay the costs. It is also looking to create jobs to replace those that left with the mining companies as coal use declined.

Such ideas could now form the backbone of a national strategy that more and more Democrats are supporting and which will also aim to help slow the pace of climate change: a Green New Deal.

The concept has the backing of the 2020 presidential contenders Cory Booker, Kirsten Gillibrand, Kamala Harris, and Elizabeth Warren and the likely candidate Bernie Sanders. The New York representative Alexandria Ocasio-Cortez and Massachusetts senator Ed Markey will soon roll out a brief outline.

A Green New Deal will aim to spur jobs and tackle inequity. It will aim to help people of color and Indigenous communities. And it will try to help places like Benham, Kentucky. But most importantly, people involved say, the document will push candidates for the White House to explain what they plan to do about climate change.

“Where 2020 contenders stand on this legislation will make it clear who is using the Green New Deal as a buzzword and who is serious about transforming our economy in line with what science and justice demand,” said Varshini Prakash, founder of the Sunrise Movement, a youth climate advocacy group.

The concept is already entering the mainstream. Earlier this week, Harris declared her support, telling an Iowa town hall: “Climate change is an existential threat to us, and we have got to deal with the reality of it.” The California senator also touted statistics projecting huge growth in wind and solar power jobs.

Behind the scenes, environmental groups, unions and climate justice advocates have been laying out their thoughts on what a Green New Deal should include.

A challenge on Capitol Hill

For people like Shoupe, it’s hard to get excited just yet. They need help now, while climate scientists stress that the world is already off the pace, having failed to begin phasing out coal and petroleum and working to limit greenhouse gas emissions from industry, agriculture and land use.

Then there is the legislative challenge a Green New Deal would present, even if all the groups involved could agree on the best way forward. So far, organizations are aligning around general aspirations, people familiar with discussions said. As concrete policy is generated, that will become more difficult.

One conflict will come around whether a Green New Deal can include nuclear power, which is carbon-free but runs on mined uranium. Another will regard the use of carbon sequestration, a technology to collect and store emissions from power plants, thereby letting them keep running.

Basav Sen, who works with a national consortium of groups, the Climate Justice Alliance, is against the inclusion of nuclear and carbon sequestration.

“There can be disagreement about other things,” he said, “[but] those are things there’s no compromise on.”

For Paul Getsos, national director of the Peoples Climate Movement, an umbrella group for community organizations and environmental justice and labor groups, the Green New Deal “has to be about reducing emissions” as well as building a more just economy.

Working with unions, meanwhile, could make it hard to set specific goals for phasing out fossil fuels, because organized labor represents people working in coal, oil and gas, steel and concrete: all sources of greenhouse gases.

The plan could also divide Democrats in Congress. Representative Jamie Raskin of Maryland has been calling for a “green deal” including a carbon fee and dividend.

“Enthusiasm on the Democratic side is overwhelming,” he said, adding that he favored “a comprehensive deal that commits us to meet goals [with] some detailed policy commitments built into it”.

But he acknowledged: “I know some members of the House have concerns about overly ambitious goals built into the Green New Deal, such as trying to wean us off fossil fuels in a decade.”
One such member was John Delaney of Maryland, who left the House last month in order to run for president.

In January, he told the Guardian: “There’s a way of doing something really big on climate change in my opinion: it involves putting a price on carbon … That’s the best way to do it: it’s a market-based solution. But suddenly some people are saying, ‘No, no, that’s not good enough, we’ve got to go further, we’ve got to basically ban carbon in 10 years.’ Now, that’s just not going to happen.

“I worry that they move the goalposts to a point where you can’t get anything done and I think that plays into Trump’s hands, actually.”

Advocates insist nonetheless that they have an opportunity to overcome such obstacles. Ben Beachy, with the Sierra Club, said he has been happy “to see just how much alignment on the broad goals there has been”.

Furthermore, for once, some say they might have an advantage in the messaging war.

Julian Brave NoiseCat, a policy analyst for the climate group 350.org and a Guardian contributor, said: “Climate change and climate policy has been framed through tradeoffs, scarcity and sacrifice for so long.

“But what’s powerful about the Green New Deal is it frames it as: ‘We can build and provide millions of jobs and do phenomenal things for everyday people through climate policy.’”