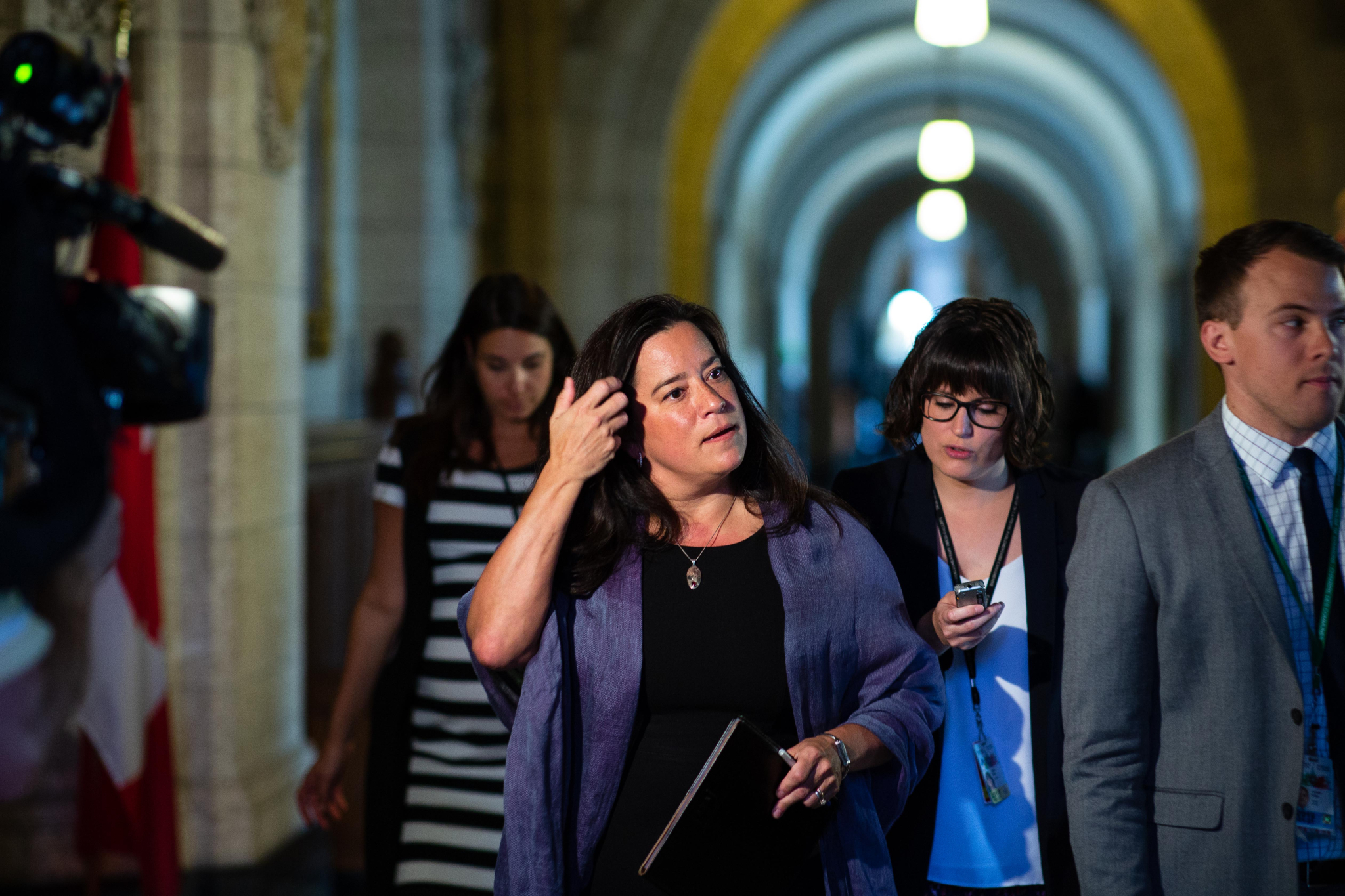 Jody Wilson-Raybould, former Minister of Justice and Attorney General of Canada, seen in the foyer of the House of Commons, in Parliament in Ottawa on June 20, 2018. File photo by Alex Tétreault
Previous story
Next story

Female politicians from all parties have come to former federal justice minister Jody Wilson-Raybould’s defence after anonymous Trudeau government insiders labelled her difficult to work with and self-centred — an attack one Conservative calls a “disgusting” and sexist character assassination.

Wilson-Raybould — Canada’s first Indigenous attorney general — is at the centre of a political scandal sparked by a Globe and Mail report that someone in the Prime Minister’s Office pressed her to stop the prosecution of Quebec engineering giant SNC-Lavalin on fraud and corruption charges.

A report by The Canadian Press exploring the relationship between Wilson-Raybould and Prime Minister Justin Trudeau’s office quoted a handful of anonymous government sources saying for example, that she “had become a thorn in the side of the cabinet,” and was “difficult to get along with, known to berate fellow cabinet ministers openly at the table, and who others felt they had trouble trusting.”

The report said these were cited as among the reasons Wilson-Raybould was demoted to the veterans affairs portfolio in a recent cabinet shuffle. They noted too that she had four chiefs of staff in three-and-a-half years and “only showed up to meetings when she felt like it,” according to the report by The Canadian Press.

“She’s always sort of been in it for herself,” said one anonymous insider to The Canadian Press. “It’s never been about the government or the cabinet. Everything is very Jody-centric.”

Politicians on both sides of the aisle have rallied behind Wilson-Raybould, suggesting overt sexism in these comments.

As someone on the inside, who knows @Puglaas, I can tell you that she is fierce, smart and unapologetic. When women speak up and out, they are always going to be labelled. Go ahead. Label away. We are not going anywhere. #IAmWithHer #StandUp #ISeeYou https://t.co/BQWeiitn9R

“As someone on the inside, who knows (Wilson-Raybould), I can tell you that she is fierce, smart and unapologetic,” Liberal MP Celina Caesar-Chavannes wrote on Twitter. “When women speak up and out, they are always going to be labelled. Go ahead. Label away. We are not going anywhere.”

Conservative MP Michelle Rempel characterized the anonymous comments as “disgusting.” In several tweets, Rempel highlighted different expectations faced by male and female politicians, and took issue with the attacks on Wilson-Raybould’s work ethic, especially as they came from officials in a “feminist” government.

“If ‘she’s in it for herself’ … equates to ‘she stood up and did the right thing.’ then way to go,” Rempel tweeted. However, she said the accusations appear gendered in nature.

1/ Thread. The character assassination our “feminist in chief” has launched on ⁦@Puglaas⁩ in this read is DISGUSTING. Through this we know that women in Trudeaus gender cabinet are measured by their ability to sit back and shut up or spout dogma. https://t.co/RrmCK5e5D9

Research shows that when women’s behavior runs counter to feminine stereotypes, women are penalized, said Erin Tolley, an assistant political science professor at the University of Toronto, whose work focuses on the intersection of race, gender and politics.

“I think if you had a male cabinet minister in the same position, you would see a different scenario,” Tolley said.

Jean Golden, a sociology professor at Ryerson University, noted that Trudeau has accepted strong women working for him. She expects Trudeau would have investigated allegations that she’s difficult to work with to determine “whether this was being based upon her being strong or...whether there was some sexism happening inside among employees.”

There is always discrimination when females “step outside the expected leadership behaviours for females,” Golden said, adding that she questions the implication that Wilson-Raybould was demoted because she was difficult, considering that she had a strong reputation as an Indigenous woman with great education and experience.

Every woman who’s ever been called “bitchy” or “difficult” or not a “team player” should re-tweet this tweet. The blatant sexism in the anonymous attacks against this powerful woman, ⁦@Puglaas, is shameful. #cdnpoli #bcpoli #persist https://t.co/12F5GHqV7f

Peggy Nash, a former NDP Member of Parliament from Toronto, has seen the gendered differences in politics at play. “A man can be assertive, but a woman will be difficult and demanding in perceived leadership because our stereotypes are predominantly male,” Nash said in an interview.

People don’t really understand how deeply seated some stereotypes are in politics, she added. “Just because the prime minister creates a gender equal caucus doesn't mean we have a gender equal country,” Nash said. “In fact I think we're very, very far away from that.”

“If the implication is that all politicians should be selfless and without ego, show me politicians, male or female, who are compliant with that.”

Penny Collenette, a former political official in Jean Chretien’s Liberal government, said in an email that “someone who is difficult is often code for ‘not a team player.’ In other words she (or he) is playing with a different set of rules or values. Perhaps even a different moral compass.”

Collenette said that “difficult” had often been used “to describe strong women, especially when they were alone in the crowd,” which seems to be the case with Wilson-Raybould.

“It’s always the case,” agreed Olivia Chow, a former NDP MP. She added that the attacks on Wilson-Raybould are a distraction from focusing on the real issue at hand: “was there any obstruction of justice?”

It is not just women who can

It is not just women who can be isolated or stigmatized but anyone with a hard working ethic and new ideas or does not "belong" can and is treated in this manner. Any "old boy's club" feels threatened when someone different with different ideas appears on the scene. I for one am of the opinion that if you are not concerned mostly for Quebec you are an "outsider" with the present government in power. This is not what I voted for and I am sure many other voters feel the same as I do.

Nor is there anything

Nor is there anything “feminist” about the Trudeau/Butts Government’s arrests or dismissal of the rights of Indigenous women when they are defending the land and culture they are trying to keep for their children.
Or the approval of projects that bring hundreds or thousands of men living in mancamps situated near Indigenous communities, knowing that assaults on Indigenous women increase.
Feminism is not just statistics or pay equity, it must include respect and support for all the work women do, including nurturing and providing for children. To do that, women, and indeed all of us involved in caring for children, require clean water, air and environments.
The Liberal Government’s understanding of feminism is akin to window dressing.

The bleating and whining of

The bleating and whining of the political insiders has been very effectively unmasked by those calling out the "sexist" language and behaviour of the still, male dominated, political apparatus of party politics.

Manipulation for advantage is the natural habitat of those who would rule, whether in the private or public sector. Considerations of "higher ethics" rarely intrude into the mechanics of "survival" within power seeking groups.

Trudeau just kicked Wilson-Raybould under the bus because he knows her independence and difference of opinion would cost him votes. SNC Lavalin is just as criminal as the mafia and Trudeau behaves shamefully when he permits such illegal conduct.