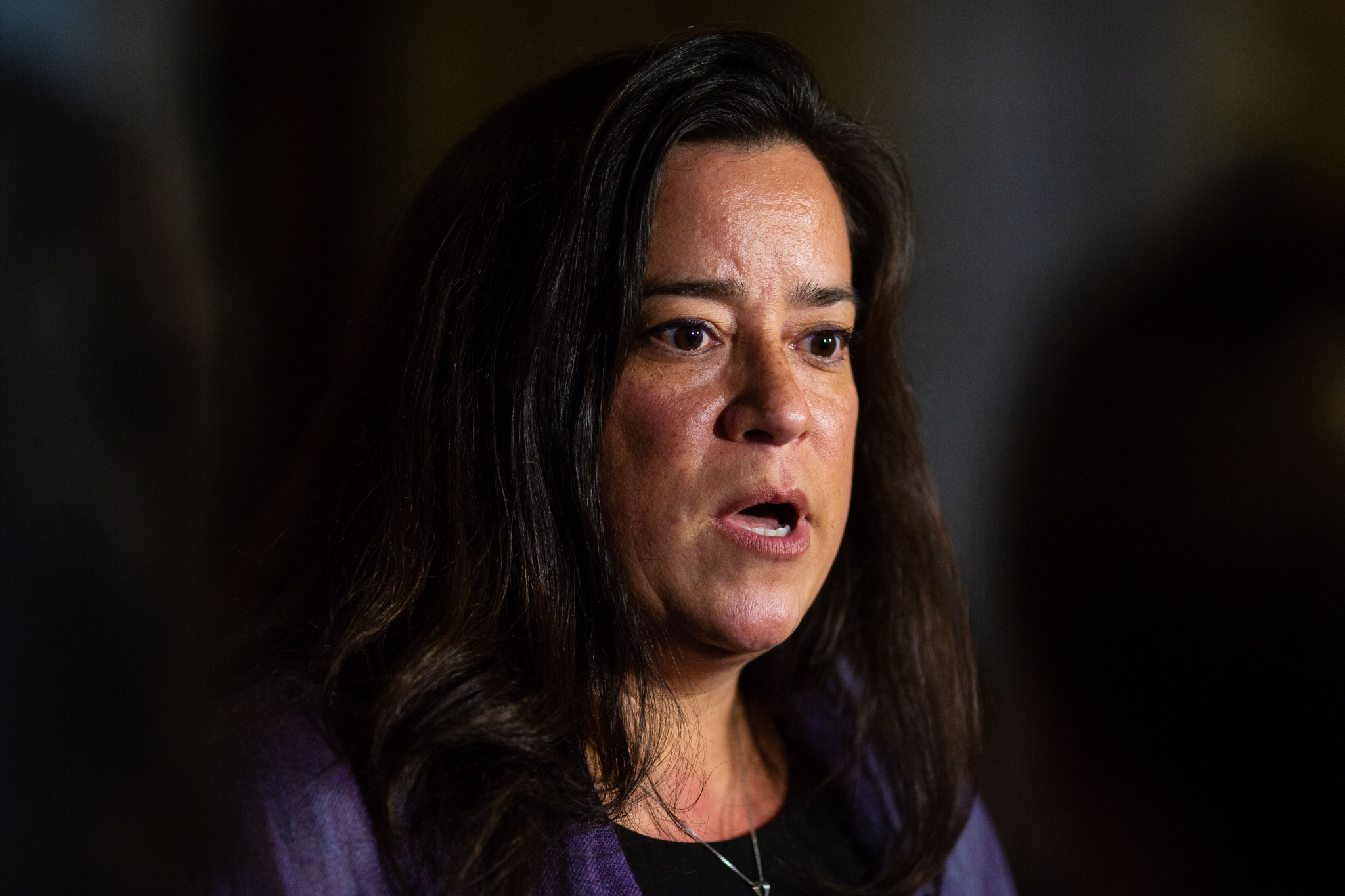 Jody Wilson-Raybould set off a political bombshell in Canadian politics on Tuesday, announcing her resignation from Prime Minister Justin Trudeau's cabinet, amid allegations his office pressured her to abandon a corruption and fraud prosecution of engineering and construction company SNC-Lavalin.

Hours later, Trudeau said he was "surprised and disappointed" by her resignation and "for folks who are puzzled...they can add me to the list."

The prime minister denied any wrongdoing by his government, insisting that it has respected the judiciary and the rule of law. He spoke while standing in front of a bus during an announcement of support for the Winnipeg transit facility.

"Our government did its job properly within the rules," Trudeau said repeatedly, adding several times that nobody, including Wilson-Raybould, came to him to report otherwise. "I don't understand it completely," he said.

Wilson-Raybould — who was Canada’s first Indigenous attorney general and justice minister before she was surprisingly shuffled to veteran’s affairs last month — said she intends to continue to serve as federal member of Parliament for Vancouver-Granville.

“When I sought federal elected office, it was with the goal of implementing a positive and progressive vision of change on behalf of all Canadians and a different way of doing politics,” she wrote in a letter addressed to Trudeau’s office and published on her Liberal Party-hosted website.

Earlier, Trudeau's office issued a short statement saying he was informed of Wilson-Raybould's resignation last night and that Defence Minister Harjit Singh will assume the role of acting minister for veterans affairs.

Conservative Leader Andrew Scheer wrote to Trudeau to request that all records related to the SNC-Lavalin affair be retained.

"Canadians deserve answers on this matter, as the allegations surrounding it strike at the very heart of fair and impartial law enforcement and prosecutorial functions, themselves vital to the rule of law and our democracy," the letter dated Feb. 12 reads.

"Given the amount of times that your story has changed, Canadians have no choice but to draw the conclusion that the present situation has the markings of a cover-up by political actors bent on protecting themselves," Scheer wrote.

People's Party of Canada Leader Maxime Bernier said on Twitter that it was time "to get to the bottom of this."

"But let's not forget the bigger picture: the subsidies, contracts, legal privileges, and favouritism that are the normal state of affairs in Ottawa," said Bernier, a former cabinet minister in Stephen Harper's Conservative government. "Crony capitalism is at the root of this scandal. Nothing will change unless we address it."

Let’s get to the bottom of this.

But let’s not forget the bigger picture: the subsidies, contracts, legal privileges, and favouritism that are the normal state of affairs in Ottawa.

Crony capitalism is at the root of this scandal. Nothing will change unless we address it. https://t.co/vlZBx2N3uR

Canadians are scheduled to go to the polls for a general election in October.

Wilson-Raybould announced her decision one day after Trudeau had said they shared common goals for the government, and five days after the Globe and Mail reported that she was pressured to allow a negotiated settlement of a criminal prosecution related to SNC-Lavalin's operations in Libya.

The company, which employs thousands of people across the country in multiple sectors such as mining, clean power, and oil and gas, wanted to negotiate a deferred prosecution agreement with Crown attorneys to avoid a criminal conviction that would result in it being banned from getting federal contracts for a decade.

With a heavy heart I have submitted my letter of resignation to the Prime Minister as a member of Cabinet... https://t.co/Ejjh8smwYO

According to the report in the newspaper, Wilson-Raybould refused to intervene and was subsequently replaced by Trudeau in a cabinet shuffle that named David Lametti as his new justice minister.

You taught me so much - particularly about Indigenous history, rights and justice. I’m proud of the laws we worked on together - C14 (assisted dying), C37 (harm reduction), C45 (public health approach to cannabis) and so much more. I know you will continue to serve Canadians. pic.twitter.com/veQ0ATPcz1

You two were a great team, esp on assisted dying. https://t.co/b2QWCHLkon

McCallum was previously immigration minister and recently served as ambassador to China before he was fired by Trudeau in January for clumsy public comments about the extradition case involving Huawei executive, Meng Wanzhou, who was detained in Vancouver in December in response to U.S. charges.

Chief Bob Chamberlain of the Kwikwasut'inuxw Haxwa'mis First Nation told National Observer in an interview that he was disappointed by the loss of “a talented, articulate First Nations woman from cabinet,” and that it was a reflection of “the mountain of integrity that is Jody Wilson-Raybould, and the molehill of integrity that is Prime Minister Trudeau.”

Earlier in the day, the Union of British Columbia Indian Chiefs, of which Chamberlain is Vice-President, put out a scathing statement demanding an apology from Trudeau for “blatant sexist” remarks being made by unnamed government officials, calling Wilson-Raybould “difficult to get along with,” self-centred and “known to berate other cabinet members at the table.”

“If you do not condemn these harmful statements and apologize to Minister Wilson-Raybould, you not only reaffirm a colonial belief system that Indigenous women are inferior and disposable, but the hypocrisy of your professed feminism and ‘most important relationship’ with Indigenous people will be laid bare for all Canadians to see,” the letter said.

your misguided colonial approach to #Reconciliation has now cost you the most brilliant Cabinet member that has Mountain ranges of #Integrity#FirstNation & Women voters will remember your actions Oct 2019
Proud of you @Puglaas#Inspirational https://t.co/6C9e0NtDQy

Chamberlain, who served with Wilson-Raybould on the British Columbia leadership council, said that the former justice minister had deep levels of integrity and honesty.

“If someone of that character and that manner of being resigns, my guess is all of those things were absent at the place she was sitting, and I don’t mean veteran affairs, I mean writ-large government,” he said in an interview.

“I don’t know if (Trudeau) felt threatened by her strength and integrity but if you lack it you certainly do not embrace it from someone else.”

Wilson-Raybould has declined to comment directly on the issue, citing attorney-client privilege due to her previous position in government as attorney-general.

She also indicated that she has hired a lawyer to seek further advice on the matter.

"I am aware that many Canadians wish for me to speak on matters that have been in the media over the last week," she said in her letter to to Trudeau, which she signed 'Puglaas', a name given to her by her grandmother which means 'a woman born to noble people' in the Kwak'wala language.

"I am in the process of obtaining advice on the topics that I am legally permitted to discuss in this matter and as such, have retained the Honourable Thomas Albert Cromwell, CC as counsel."

Not surprised w/ @Puglaas resignation. She clearly feels she can no longer serve in Cabinet or perhaps should no longer serve. The fact that she intends to remain as MP & has retained independent counsel means she will be a time bomb for the gov’t. #cdnpoli

Cromwell is a senior counsel at the Canadian law firm Borden Ladner Gervais, which focuses “on business law, commercial litigation and arbitration,” according to their website.

Wilson-Raybould later took to Twitter to thank supporters, including her father, Paul Wilson, who told the CBC in an interview that Trudeau had kicked the former attorney general in the teeth by demoting her to the position of veterans affairs minister.

Thank you to my pappa for your unwavering support. Happy your eye surgery was successful. See you soon - nothing like being on the TV talking ‘bout you and me. ❤️ https://t.co/aIak3DdTqV

Needless to say, I have been #StandwithJody since Day 1 in 2011 and I'll continue to be so. She is equally as joyful and bright as she is principled, passionate, and determined to enable greater equality in this world. #Truth2Power pic.twitter.com/kDY6Teowi8

Amyn - thanks for the tweet - what a time we had together - navigating our early years of debating law and democracy. Thank you for your friendship then and today. https://t.co/LkaUOfpASE

In Winnipeg, Trudeau said he has asked the current attorney general for advice on waiving privilege. But he said caution is warranted because SNC-Lavalin is before the courts and that there may be unintended consequences on the outcome of legal proceedings if privilege is waived. He declined comment on whether he thought the Commons justice committee should inquire into the matter, saying "they are independent."

Cromwell sat on the Supreme Court of Canada from December 2008 to September 2016 and on the Nova Scotia Court of Appeal for 11 years prior to that. He has an expertise in interest arbitration for large public sector employers and unions, complex mediations involving large public sector entities, and advice concerning appeals and applications for leave to appeal, according to his biography on the law firm's website.

He serves as the Chair of the Chief Justice of Canada's Action Committee on Access to Justice in Civil and Family Matters and is a Trudeau Foundation mentor.

In an email to National Observer, Cromwell said he “will not be making any statements or doing any interviews.”

Typical that this "controversy" should have claimed, as its first victim, the apparently principled, Minister of Justice. The Minister seems determined to salvage a reputation for ethical behaviour - more power to the Minister.

IF it is true that Trudeau

IF it is true that Trudeau and Wilson-Raybould were not in communication over the SNC Lavalin case then the only explanation for the campaign of vilification against the justice Minister is that certain "old school/compromised" elements in the Liberal hierarchy must be agitating on behalf of their important Transnational Quebec based "friend". Not being acquainted with the corridors and back rooms of Ottawa's fixers, I can't even imagine the machinations that went into this singularly brutal political putsch.

Like most Canadians I suspect, I breathlessly await the investigations and hope for the un-masking of the "operators" who engineered this forlorn hope to salvage SNC-Lavalin. No Corporation is too big to fail, and it may be just and productive to break up this behemoth. There are other Canadian industrial blockbusters which should also be downsized, like Irving, which operates like feudal overlords in the province of NB with grasping global tentacles extending outward. Too much power, corrupts everything in its path.

Interesting that the first

Interesting that the first time you appoint a principled minister, the corruption of the .01% gets aired.