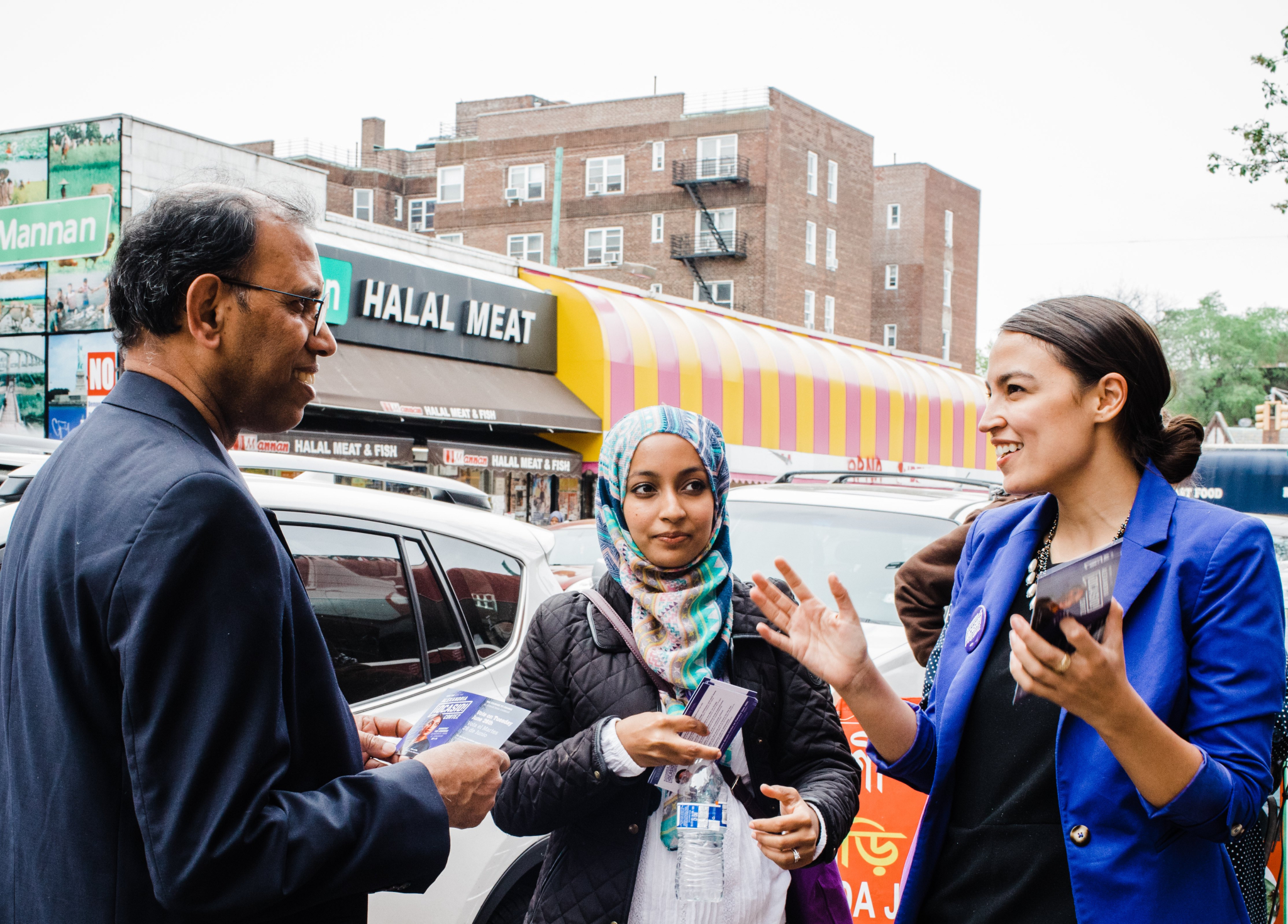 Congresswoman Alexandria Ocasio-Cortez and Senator Ed Markey, along with dozens of co-sponsors, have introduced a vision for the Green New Deal. One Republican called it a “socialist manifesto”. Many environmental advocacy groups have hailed it, but some say it doesn’t go far enough. Others warn that its broad scope and the long list of progressive social programs it endorses could hinder its climate efforts.

So what is the Green New Deal?

The proposal outlines the broad principles of a plan simultaneously to fight inequity and tackle climate change. It does not contain policy details or advocate for specific ways of reducing greenhouse gas emissions. But with a broad brush it aims to make the US carbon-neutral – net zero carbon emissions – in 10 years.

The Green New Deal recognizes that transition would require massive change. It endorses ways of ensuring that vulnerable populations – including the poor, people of color, indigenous populations and communities already facing environmental degradation – take part in the planning process and benefit from the green economy.

Would it end the use of coal, oil and natural gas?

No. But it would aim to offset any remaining greenhouse gas pollution with forests that absorb carbon dioxide, for example. It does not specifically address what role nuclear power or fossil fuels with carbon capture technologies would play. Nuclear power represents half of the carbon-free energy in the US, but it runs on mined uranium. Fossil fuels with carbon capture would still require drilling and cause pollution.

How ambitious is the Green New Deal?

Incredibly ambitious, both on climate change and with its reimagining of society.

Fossil fuels are deeply embedded in the US economy. Of the total greenhouse gas emissions in the US in 2016, 28% were from electricity, 28% were from transportation, 22% were from industry, 11% were commercial and residential and 9% were from agriculture.

US climate efforts so far have focused on the power sector, which is probably the easiest to decarbonize. Many states and localities have continued that work even as the federal government ignores climate change.

But coal is being replacing with both renewable power and natural gas. Natural gas has a smaller carbon footprint than coal but still causes climate change.

Additionally, climate advocates and policy experts across the country have not typically tried to address every contributor to global warming at once or while addressing other societal issues. This kind of system-wide thinking and planning would be difficult to adopt.

The energy shift would require a major investment, as would the social programs highlighted in the Green New Deal. The resolution does not suggest a source for that money. The politics of the plan are also difficult, with Republicans in control of the Senate and the White House vehemently opposed to it, and with some Democrats split over whether it is the right approach.

How would it fight climate change?

The goals of the document include a “10-year national mobilization” to:

What does the science recommend?

The earth has seen about 1C (1.8F) of warming since industrialization. Scientists say limiting warming to 1.5C would require cutting manmade carbon levels by 45% by 2030 and reaching net zero around 2050. The US currently generates about 15% of that greenhouse gas pollution, although it is the biggest contributor historically.

Exceeding 1.5C of warming by half a degree will worsen the risks of drought, floods, extreme heat and poverty for hundreds of millions of people.

What would the Green New Deal do for people?

The proposal lays out numerous “crises”, including declining life expectancy for many Americans, as well as wage stagnation and income inequality.

The Green New Deal calls for:

Such efforts need to be

Such efforts need to be acknowledged, but it doesn't solve the problem.

Isn't it amazing that so many

Isn't it amazing that so many progressive groups come to the same conclusions?!! Here's yet another plug for the "Green New Deal of the North" as proposed by the Courage Coalition. Please google it and sign it!
Thanks.

However impressive this idea

However impressive this idea is, there is one serious flaw in the underlying science. Even if we were to meet power demands with “clean, renewable and zero-emission energy sources” and plant millions of trees, the continuing and escalating extraction and transportation of fossil fuels, the increasing pipeline and LNG infrastructure developments will continue to pour millions of tons of GHG emissions into our shared atmosphere for as long as we allow it. Carbon capture is still not feasible on a large scale in spite of decades of promises of its benefit. The increased frequency and severity of extreme weather events is massively destroying giant swathes of the boreal forest, obliterating its value as a carbon sink while releasing even more carbon into the atmosphere.
Without directly reducing the extraction of fossil fuels we are ‘screwed’. Politicians, who are lobbied relentlessly by the O and G Industry, and who continue to perpetrate the notion that the fossil fuel industry (is the only source of good jobs) are still dilly dallying on meaningful action. We now have only 11 1/2 years left! It seems that the children are indeed the only ones who are taking action, with Greta Thunberg in the lead. It is now up to the rest of us ‘adults in the room’ to get out there on the streets and support her and the thousands of European school children who are joining her.

I'm sorry, but extracting fossil fuels does very little to increase GHGs. That comes from consuming them.

Heaping blame on the producers that naturally want to meet people's needs is scapegoating. They would build no pipelines or plants, drill no wells, if people stopped consuming their product.

You can blame old whalers for killing whales, but they did it because people bought THAT oil; and they stopped when the now-hated rock oil was made available, a better and cheaper alternative. The early oilmen (think the bad guy in "There Will Be Blood") literally did Save The Whales when oil-providing whales were barely a decade or so from extinction.

If you fly across country to attend an anti-pipeline demonstration (or for a vacation afterwards) your words say "stop extracting oil", but your actions say "Please seven barrels of oil and put a ton of carbon into the atmosphere so that I don't have to travel by bus for two days". * And your actions speak louder than words.

You're like a preacher railing against prostitution in the pulpit, while sneaking into the red-light district that night.

The GND is about creating alternatives so that you can have a modern lifestyle that even carbon-activists expect and demand, without carbon consumption that makes a mockery of your own words. It's not about applying negative pressure to the producers of energy that even you depend upon, it's about applying positive pressure to their competitors, making them a Big Business that you turn to, (even if a bit more expensive), and kicking the oilmen out of their beloved free market, to join the whalers in the dustbin of history.

I think you'll find it a more edifying approach.

* A notional consumption. It actually takes dozens of barrels of oil to make that much aircraft fuel, because only 10% of oil can become aircraft fuel. But 90% of those dozens of barrels go to other things, gas, diesel, road asphalt - the fair share is 7 barrels, i.e. two tons of oil, of which one ton is carbon. A return cross-country air seat is 1.2 tons, taking the bus 3 days each way is only 0.2 tons. A full ton saved. Nobody does this, hence Greyhound dying.

Good points made in Roy

Problem with the action so far is no one, including governments consider the entire picture when looking at action needed to be taken. Most conversation is focused on Fossil fuels, very little, if any, looks at the entire picture - cradle to grave. Until governments, industry and activists consider all the elements involved to improve the Carbon, plastic, energy needs etc. we will not win the battle.

As I have said before we need a plan of action with measurable points, with teeth in legislation to put the plan into action. Refer to the United Kingdom and their legislation as an example. No measurable plan, not legislation to cause execution, no buy in from all political parties and industry "NOTHING HAPPENS". It's all nice sounding words that lead no where.