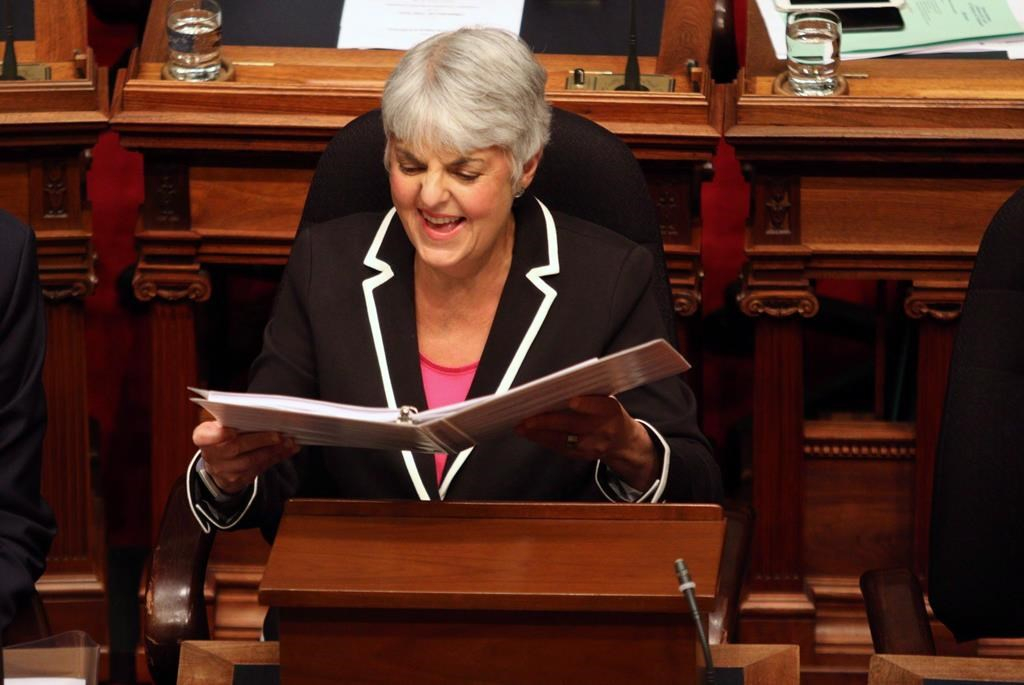 Finance Minister Carole James shares a laugh with a colleague before delivering the budget speech from the legislative assembly at Legislature in Victoria, B.C., on February 20, 2018. File photo by The Canadian Press/Chad Hipolito
Previous story

British Columbia's finance minister says the budget she tables Tuesday undertakes development of social, environmental and economic initiatives as other provinces across Canada implement cuts to programs and shifts to the right.

Prof. David Black said he expects the social and economic agenda laid out in James's budget to contrast sharply with the right-leaning policies in some other provinces.

Manitoba and Ontario have Conservative governments. The Coalition Avenir Quebec government, is essentially conservative, and the Saskatchewan party is right-leaning. Jason Kenney's United Conservative Party in Alberta, meanwhile, is considered the front-runner in this year's Alberta election, said Black, a political communications expert at Royal Roads University in the Victoria area.

"If the Alberta NDP lose in the spring election that leaves six out of 10 provinces with right-of-centre control," he said. "It puts a powerful spotlight on B.C. as a place of social democratic governance."

James's budget is expected to include new funding for the government's poverty reduction strategy and its Clean BC plan to fight climate change.

Black said the B.C. New Democrats led by Premier John Horgan are on a social building agenda that he labelled "radical pragmatism."

Rather focusing attention on one issue — the environment, economy, education — the New Democrats are touching numerous social concerns that are building large-scale changes, he said.

"It is a much more humble, circumspect, careful, but nonetheless ambitious program of change," said Black. "It's not legislation by thunderbolt. It's a kind of radical pragmatism."

"Certainly all of our economic indicators are very positive," James said, citing record low jobless rates and solid growth projections. "We're in a strong economic position. It certainly is my plan to go forward with a balanced budget."

She said she expected the government's poverty reduction and climate change strategies to be priorities in the budget.

The government's Clean BC climate plan, introduced last December, is slated to cut greenhouse gas emissions by 40 per cent by 2030, 60 per cent by 2040 and 80 per cent by 2050. By 2040, all new cars and trucks sold in B.C. will be zero emission and new buildings will be 80 per cent more efficient than now.

"The poverty strategy will be a priority in this upcoming budget along with Clean BC," said James. "Both of those will certainly have a priority when it comes to budget 2019."

She said the dollar amounts designated to the poverty and environment plans will be revealed in the budget.

"The comprehensive poverty strategy will look across ministries, across government and at what kind of investments and supports we need to put in place to help people get ahead," James said.

"I'm a numbers person," she said. "Until I see the numbers in the budget and see exactly how much is allocated to each priority, I don't want to make too much out of promises and rhetoric. I want to see action in a number of different areas. The strategy needs to be comprehensive to be successful."

The government said in its throne speech on Tuesday that making life more affordable will be the hallmark of its initiatives in the coming months. It promised to tackle cellphone costs, ticket scalpers, money laundering loopholes and poverty.