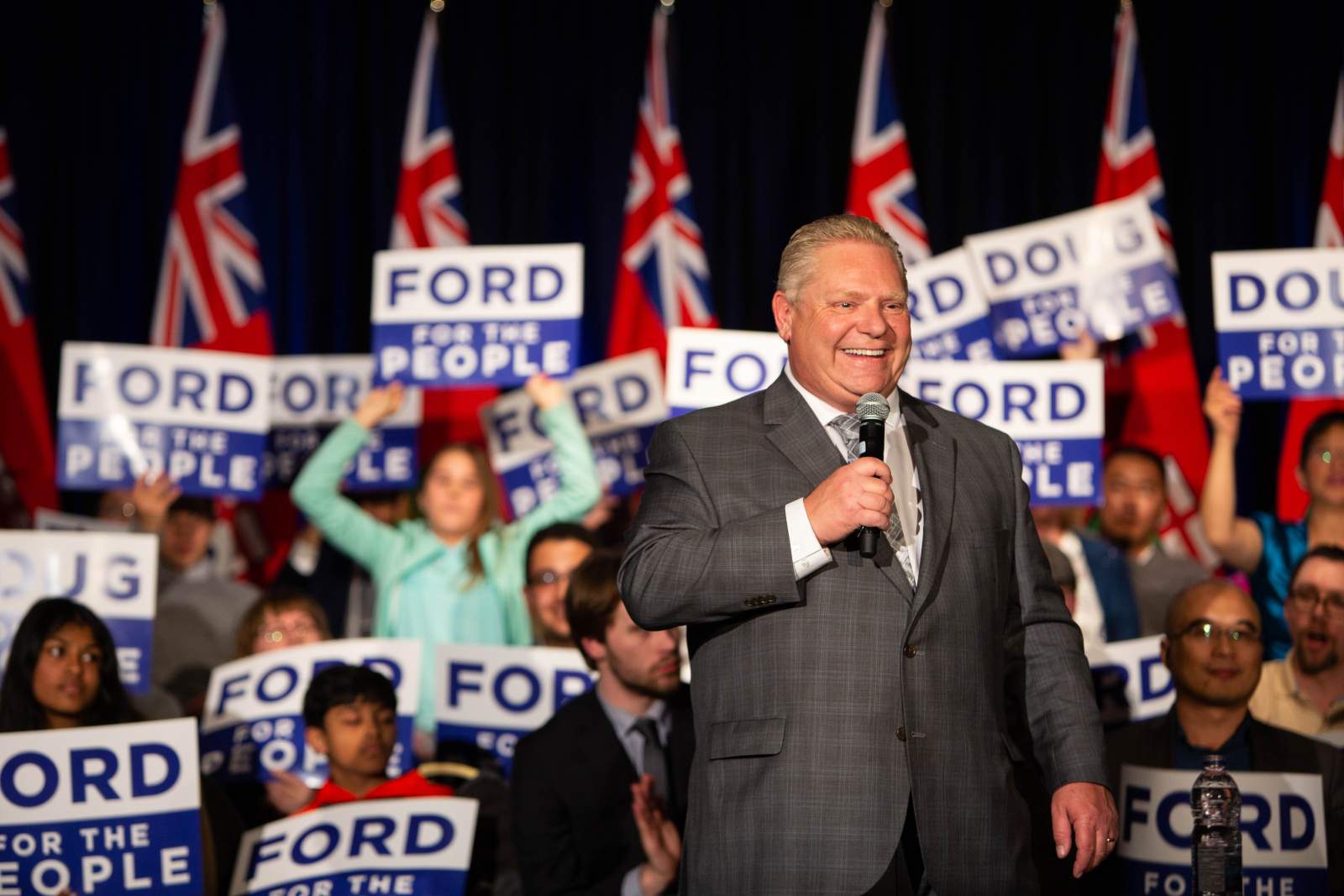 Premier Doug Ford said some protesting students "should have their mouths washed out with soap" after one swore at him as they interrupted the legislature Tuesday to rally against cuts to post-secondary education fees.

"You're a f***ing cracker, you know that," one of the students heckled as Ford looked up at the gallery during proceedings. "You can kiss my a**"

Students protested inside and outside the chambers to urge Ford to retreat from education reforms that include the removal of mandatory fees that fund student unions and independent newspapers, among other things.

Inside the legislature, a handful of students interrupted the daily question period with chants of “No cuts, no fees, tuition should be free."

The rally call began as New Democratic Party Leader Andrea Howarth posed a question to the premier about changes to the Ontario Student Assistance Program (OSAP) that would eliminate free tuition grants for students from low-income families; cancel a six-month interest-free period on student loans after graduation; and cut tuition fees by 10 per cent.

The Jan. 17 proposals were part of a new funding framework for Ontario’s post-secondary education system that critics say will throw students further into debt. It includes a policy called the 'student choice initiative' to allow students to opt-out of fees that pay for such services as campus newspapers, food banks and breakfast programs, student employment opportunities and sexual healthcare services.

The premier smiled, and responded to Howarth's question with a reaction to the students. "Here’s an example of indoctrination, what we just saw up there," he said, adding that the students "should have their mouths washed out with soap.”

Just a week ago, Ford signed an email sent to Ontario Progressive supporters soliciting donations, in which he defended cuts to the OSAP that said: "I think we all know what kind of crazy Marxist nonsense student unions get up to. So, we fixed that. Student union fees are now opt-in."

The student protesters in the gallery are "gonna be good socialists," the premier remarked.

Moments after the students in the legislature were removed by security, the chamber was filled with the echoes of drums coming from the dozens of students gathering the Queen's Park grounds outside.

“The Marxists are coming for you!” an NDP member yelled at Ford.

Who's afraid of an educated public? We're currently at the rally at Queen's Park fighting for Ontario's education. Come join us! #WeTheStudents #OSAP pic.twitter.com/BRKnKZcPB2

Conservatives say students were 'out of line'

Some Opposition members expressed outrage at the premier's comments, with several joining the protest outside to sign a student petition. "The people have the right to be here and show their displeasure at the government's behaviour and policy agenda so if the premier responds in the way that we saw today, that's his inability of maintaining a dignified presence in the (legislature) and he's going to have to figure out how to fix that," Horwath told reporters outside the legislature.

"Here we have a government that is cutting funding to post- secondary education, that is making university more expensive, particularly for students from low, modest and middle-incomes and is attacking student democracy and student services," Schreiner said. "From all the student groups I'm talking with, they're seeing the government's actions as an attack on students and an attack on education."

NDP MPPs are lining up to sign CFS petition pic.twitter.com/e2e6Li838Q

Several Conservative MPPs defended the premier, saying it was the students who were "out of line."

Government House Leader Todd Smith told reporters that students have the right to protest but "there's a way to do it and way not to do it, and that was, I think, the way not to do it in a place like the legislature."

Merrilee Fullerton, Ontario's minister of training, colleges and universities, said the students have a right to protest outside but "here in the chamber, it is very important that we respect people's rights and respect the processes."

Fullerton told reporters outside the legislature that she had "no plans" to meet the students gathered outside but wanted them to understand that the proposed changes to OSAP were a way to "put dollars back in the pockets of students."

"We want to make sure students have freedom of choice, that they are empowered in making that choice over their finances," she said, noting that the 10 per cent cut would add up to $450 million in tuition relief and make for "easier, clearer" OSAP policy.

"We've done this for the benefit of students...In many ways this is going to assist in terms of streamlining and making our processes more efficient," she said. She had met with many students "during this process, during the campaign, after the election," and heard regularly from students by emails and letters.

"I'd like to know which students she's consulted," Schreiner said, adding that the students he had met with hadn't been consulted.

The outrage extended beyond the legislature. Deb Matthews, the former Liberal minister of advanced education and skills development, tweeted that she was "gobsmacked" by the Conservative responses to OSAP in the legislature.

Watching Question Period at Ontario legislature, and am gobsmacked at the answers from @fordnation and @DrFullertonMPP . Either they do not understand what they have done to #OSAP, or they are outright lying. There is no other explanation. Truly shameful. #onpoli #saveOSAP

"Either they do not understand what they have done to #OSAP, or they are outright lying," she wrote. "There is no explanation. Truly shameful."

Perhaps forced soap-eating happened in the Ford home back in the day? But even in the era when Mr. Ford was growing up that still would, to put it mildly, be viewed as regressive.

If you're an old white male

The contempt folks who do little child rearing or child protection, have for youth needs to be widely understood. Doug is helping us all get up to speed in this regard.

40 years ago I was part of a group that studied the effect of student grants and loans on poor families in Ontario. Of course, richer people could afford to send their kids to any college or university without assistance. Poor families - students - were loath to take on debt to do this for obvious reasons: fearful of debt and ability to repay; a terrible burden upon graduation to start work needing probably a car, clothes, a place to live to take a job somewhere - no borrowing room left for that. So if you want to break the poverty cycle, if you want to start to level the playing field between rich and poor, you MUST fund post-secondary education for poorer students. NOT loans.

Education is not something

Education is not something the conservative mainstream understands deeply, or much appreciates. Their agenda depends on traditional values, and reductive thinking.......both of which come under scrutiny and sometimes attack, as the young person internalizes educational values.

the Conservative status quo depends on people who react rather than act, on voters who choose a colour not a platform. Education threatens that kind of knee jerk politics...and could spell the end of any regime that impoverishes the young to maintain the authority of the father.