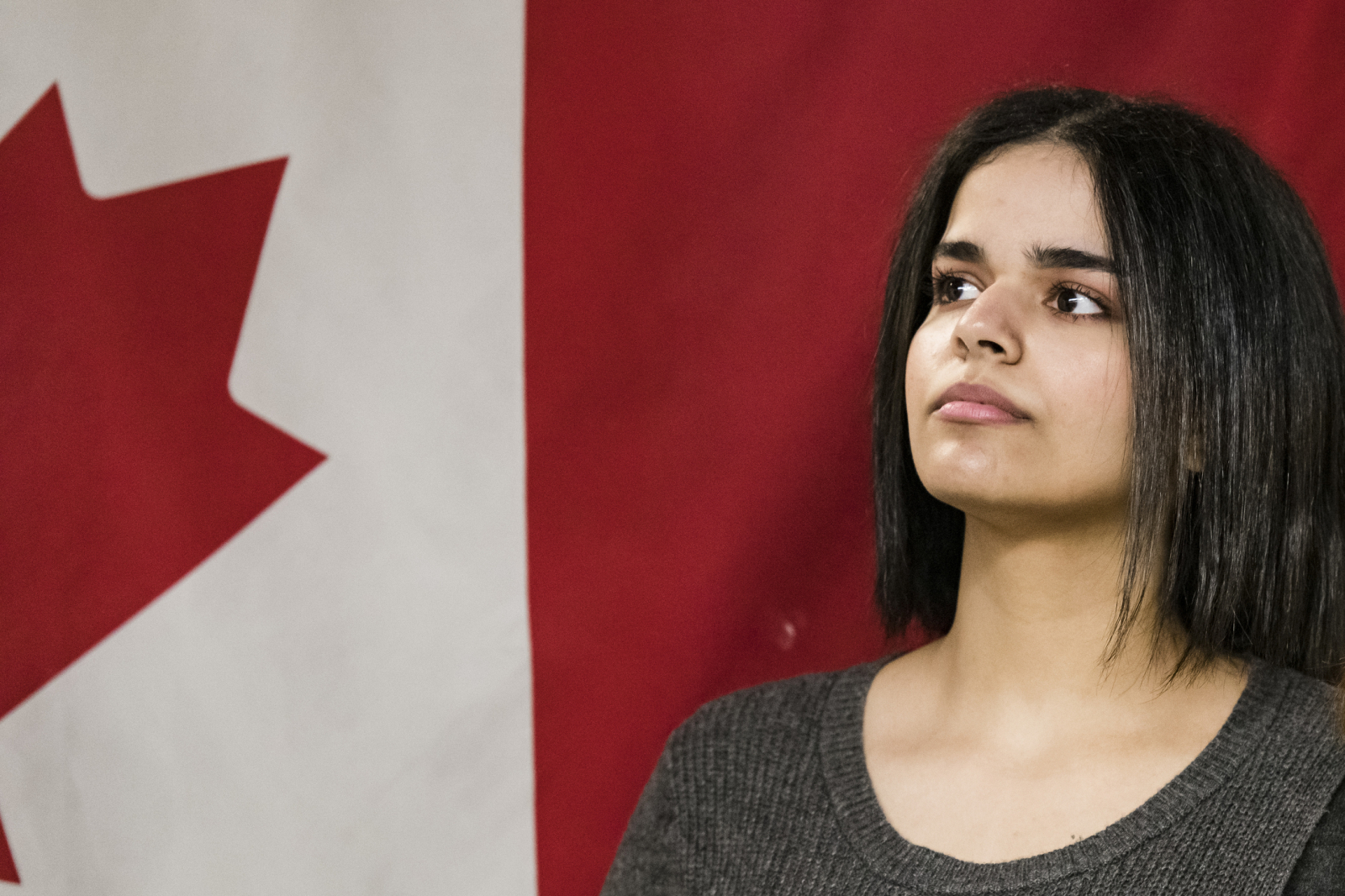 Rahaf Mohammed gives a statement to reporters at the COSTI Education Centre in Toronto on Tuesday, Jan. 15, 2019. Photo by Christopher Katsarov
Previous story
Next story

On Tuesday, Rahaf Mohammed decided to speak publicly one last time after a 10-day ordeal that saw her become the most high-profile asylum seeker across the world.

Clad in a knee-length grey sweater and black ankle boots, she read confidently from the white sheet of paper carrying a statement she had crafted in Arabic, flanked on one side by her settlement worker and translator, Saba Abbas, and on the other by Mario Calla, executive director of COSTI Immigrant Services.

“I would like to start living a normal, private life,” said the 18-year-old teenager who has dropped her family name, al-Qunun, since her family has reportedly severed ties over social media. Mohammed has alleged abuse at the hands of her family members in Saudi Arabia, offering few details other than to say that she was “not treated respectfully” by her family and not permitted to make her own decisions.

Ten days ago, she fled from them while on holiday in Kuwait, and after an emotional few days barricaded in an airport hotel room in Thailand, she was granted asylum status in Canada and personally welcomed by Chrystia Freeland, the foreign minister, upon arrival on Saturday.

Mohammed would like to now live “like any other young woman” in Canada, she told reporters. She wants to learn English, get an education, and work in support of freedom for women.

Mohammed's asylum plea was 'a genie in the bottle' moment

Mohammed's expedited asylum process is not exceptional, according to government and UNHCR representatives. Every year, Canada admits 250 refugees under the federal Urgent Protection Program, for those refugees who are extremely vulnerable and in exceptional danger. About 50 people a year are granted legal asylum in the same short timeline Mohammed experienced, a spokesman for the immigration minister said.

Mohammed was assesed to be one of them by the UNHCR, who recommended her case to Canada. The UN refugee agency examines each case for asylum based on the extent of their vulnerability and state of immediate danger. Emergency cases can be processed within days, like Mohammed's, or within 12 months.

The only exception in Mohammed's case is visibility. Social media drew her to safety and gave her an international support system that ushered her to Canada.

Steve Joordens, professor of psychology at the University of Toronto, believes Mohammed caught "a rare genie in the bottle" moment in the span of 10 days. Her plight became "a lightning rod for confirmation bias that said yes, everything you assume a woman in Saudi Arabia thinks and feels is what she thought and felt."

The only exception in Saudi asylum seeker Rahaf Mohammed's case is visibility. Social media drew her to safety and gave her an international support system that ushered her to Canada. Now it's become a "minefield" of online threats.

Her story "made us feel like our perspectives were right," Joordens said. And whether those "naive western perspectives" are right or wrong, that feeling spurred an international community to band around her.

From the outset, Mohammed's journey to safety played out so perfectly, but, Joordens is quick to recognise that "if it was so easy, we would be scouring for other cases." Mohammed's case "was a huge moment, unlikely to happen again in the way it did."

Syed Hussan, a member of the Migrant Rights Network, agreed. Mohammed's case was a confluence of people banding together that wouldn't have been as loud if her story hadn't begun as a social media phenonmenon.

"We need to completely shift our understanding on refugees. We think it's this orderly, regulated system but it's just an arbitrary, political process," Hussan said. "People end up being lost in different cycles and she just rose in it."

Social media, he says, "changed the terrain of access" for her and proved that the refugee and asylum system in Canada, and around the world, "is irrational."

The Canada government expedites cases all the time for various reasons, he added, "but perhaps not in response to a trending hashtag."

"It's a complex world so people do anything and everything to save themselves," Mario Calla, executive director of the immigrant services agency COSTI, told reporters after Mohammed's public statement. COSTI is helping Mohammed's resettlement efforts.

"Social media may now be a tool for them," he said. "It depends on whether or not it grabs the attention of the right people."

A 10-day ordeal as documented on social media

“My name is Rahaf Mohammed, and I will publish my full name in case my family and Saudi Arabia and the Kuwaiti embassy man do not stop chasing me.”

That is the desperate tweet written in Arabic by the 18-year-old girl from Saudi Arabia that provoked global outrage ten days ago. Then, she was at an airport hotel room in Bangkok, where Thailand officials were trying to get her back on a plane that would return her to a family she’d clandestinely fled during a holiday in Kuwait. She was trying to get to Australia.

Little is known about Mohammed's story other than what appears on social media.

According to her tweets, on January 5, Mohammed barricaded herself from the guards outside her airport hotel room with a mattress against the door, she tweeted that she won’t be able to survive if the Saudi embassy kept pursuing her. Her passport had been seized by the authorities. "I have been threatened by several staff from the #Saudi embassy and the Kuwaiti airlines, and they said ‘If you run, we will find you and kidnap you, then deal with you.’ I really don't know how they are going to behave in case I run. #SaveRahaf,” she wrote.

“I’m afraid, my family will KILL me,” she wrote.

She requested refugee status “based on the 1951 Convention and the 1967 Protocol” in another tweet that day from any country that “would protect me from getting harmed or killed due to leaving my religion and torture from my family.”

She shared a screenshot of a tweet by a “cousin” who threatened to “slaughter” her.

The international community rallied behind her immediately. A BBC South East Asia correspondent tweeted her story. Than the executive director of Human Rights Watch said it was “appalling” that authorities would return her to Saudi Arabia. Mohammed gave the control of her Twitter account to three friends — one in Sweden and two in Canada — just in case something went wrong.

On January 7, the chief communications person for the UNHCR tweeted to her that representatives were at the airport and seeking access to her. Under their protection, she avoided an interaction with her father.

The next day, she appealed to Canada directly.

I want Canada to give me asylum!

Three days later, on Jan. 11, she was on a plane to Canada. UNHCR made a request to the federal government to accept Mohammed’s asylum application — and they, in turn, accepted.

“That is something we are pleased to do because Canada is a country that understands how important it is to stand up for human rights, to stand up for women’s rights around the world,” Prime Minister Justin Trudeau said at a Jan. 11 news conference.

While social media drew Mohammed to safety it has now become a "minefield" of online threats, Calla said.

“She has taken a position that some take issue with,” he told reporters. The level of safety Mohammed feels fluctuates often, so she's never left alone: a COSTI staff member is with her at all times, and the refugee agency has hired a private security guard, who protects her current place of residence.

“Frankly, this happened so quickly, we hired the guards, and we will talk to the federal government,” Calla told reporters about the price tag on Mohammed’s security. “I’m sure they’ll cover it. If they don't, we will.”

The organization has had to hire private security before, including when safety concerns arose in some of the hotel lodgings the government has arranged for refugees and asylum seekers from Syria, Calla said.

COSTI staff are working to inform Mohammed about the risks she faces in the short and long-term, when it comes to security. The federal immigrant agency is considering setting her up with a family, so she doesn’t have to live alone in Canada, and someone can watch over her.

“She feels safe because she knows she’s in a safe country. She sees the people around her have her best interests at heart, they’re trying to help her,” Calla said. “At the same time, she sees these threats because she has left Islam, she has basically broken away from her family, and so on. That scares her. Her emotions go back and forth.”

But, Hussen worries what happens next now this very high-profile asylum seeker — who emerged from a confluence of hot political and human rights issues — tries to find normalcy. "She did what was available to her," he said. "The question is where does she go from here? Who does she become a symbol for?"

"Clad in a knee-length grey

"Clad in a knee-length grey sweater and black ankle boots" I bet if the article was about a male, the writer wouldn't have felt it necessary to pay attention to dress attire. Why is it that even a progressive news source like the National Observer cannot refrain from paying attention to such needless details?

Hi Adrian,
Thank you for your comment and I can see where you're coming from. However, I'm just reading Michelle Obama's wonderful memoir and, throughout, she talks about what people are wearing as a way to make people vivid and real. In the hands of a good writer, those details make a person come alive. I hope that we would also talk about a man's clothing, if it helped make him more real, as one of other details in a story. Just one writer's opinion! Regardless, thank you for your feedback. Always appreciated.
Linda

There is hate speech towards

There is hate speech towards her on the Yellow Vests Facebook page. Rather disturbing how LIES flourish in certain circles. People need to think and investigate for themselves.
Thanks for such great journalism !!

It is not surprising that

It is not surprising that when women hit the news cycle for any reason that the trolls appear milliseconds later to feast on the carcase. Nothing about a woman is safe from their vitriol. I have begun to think that every female on whom the spotlight rests will need security protection and an immediate change of identity.

And in response to Linda - my recollection of Michelle Obama's memoire, is that she spoke about the clothes she and her children wore - more as an illustration of how those clothes seemed required to project an image expected by others in the political games. I don't recall any emphasis from her about the clothing she encountered on her friends, her colleagues, or those who supported her. Just barely mentioned her mothers outfits on inauguration day, and once amusingly, commiserated with another Washington Wife over the torture of fashionable shoes. She was gracious about the women who surrounded her during those 8 years, but did not attempt to exploit them with undue invasion of privacy. Gracious and canny!