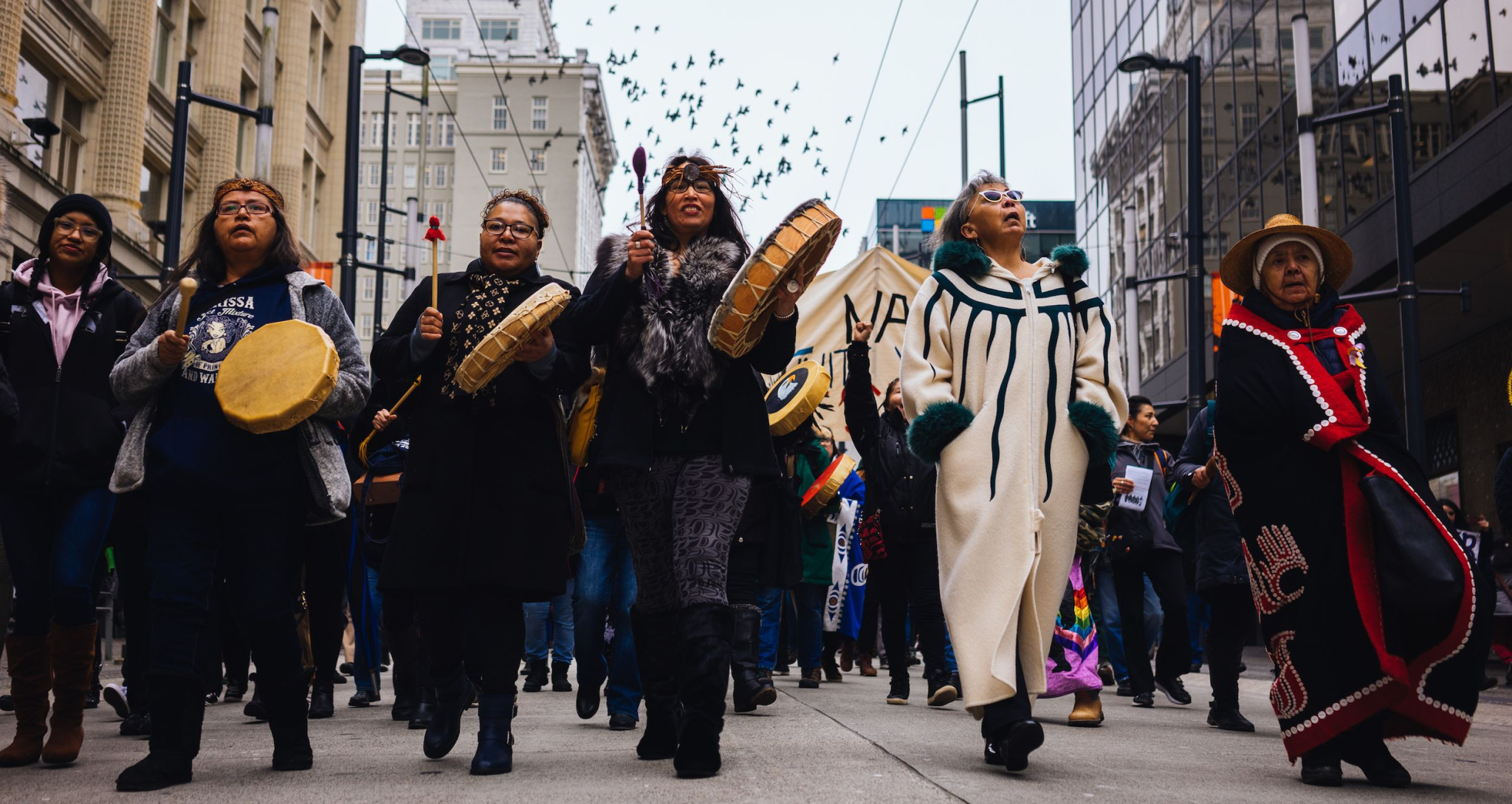 Women lead a march on Jan. 8, 2019 in Vancouver, B.C. Rallies were held across Canada to show solidarity. Photo by Michael Ruffolo
Previous story
Next story

As a social movement scholar, I am often asked about the impacts of protests, and what I foresee as the eventual outcome of such events. The recent standoff between members (and allies) of the Unist'ot'en clan (who are part of the Wet'suwet'en First Nation) and workers from the Coastal GasLink Pipeline led to a military-style raid by the RCMP on the Gidimt'en camp and the arrest of unarmed elders, which in turn garnered a great deal of media attention, and public discussion.

The Unist'ot'en elders have spoken for themselves, and some have said that the purpose of the camp was to assert their rights to occupy their unceded traditional territory. Other members of Unist’ot’en have explicitly spoken about their actions as being in support of protecting the land and water on their traditional territories for future generations. Many observers saw the Gidimt'en camp as a protest and as an effort of resistance to the pipeline project (and perhaps larger forces), and various aspects of this conflict can be viewed through the scholarly lens of social movement theory.

Social movement scholars are often interested in analyzing the outcomes of protest campaigns, although most scholars would argue that it is not possible to confidently predict the outcome of a single case. Nevertheless, there are a number of useful analytical concepts that scholars use in trying to understand what produces particular outcomes. Some of these can be identified in the present conflict and may shed light on what to look for, and what to expect. Scholars often consider resources, identities, social networks, communication, framing, and political opportunities. Here I am going to focus on the interrelations between the last two factors.

The Framing of Issues and Actions

The way in which protests are framed is important to how events are seen by wider publics, and the extent to which the positions of particular groups are supported. The concept of “framing” refers to the way arguments are constructed to serve as a guide to how events should be interpreted and responded to. Successful framing efforts can tip the balance in the direction of one outcome versus another. One frame put forth by supporters of the pipeline is that protesters violated a court injunction and were justifiably arrested for breaking the law.

It is commonly the case in social movements that injustice frames are invoked. It has been asserted that members of the Wet'suwet'en First Nation were occupying their unceded traditional territory, and that by arresting people at the Gidimt'en camp, the RCMP violated the United Nations Declaration on the Rights of Indigenous Peoples (UNDRIP). It will be interesting to see if this frame (or interpretation) gains traction. If it does, this has the potential to embarrass both the federal and provincial governments — which have both indicated that they support UNDRIP — because UNDRIP states that "full, prior and informed consent" is needed from Indigenous people for resource development. The declaration also states that, "Indigenous peoples shall not be forcibly removed from their lands or territories." The RCMP intervention, therefore, seems to be a direct violation of UNDRIP.

Analysts often consider the extent to which aspects of the larger socio-political-economic environment provide opportunities or constraints for contending groups in their efforts to pursue particular goals. This notion is referred to as “political opportunities.” Two important features of the present situation are the fact that Prime Minister Trudeau has stressed the importance of his relationship with First Nations, and the fact that both levels of government have supported UNDRIP. With regard to the former point, Trudeau has stated that, "No relationship is more important to me and to Canada than the one with First Nations, Metis Nation, and Inuit People."

The RCMP actions at the Gidimt'en camp seem to contradict this position. Further, many supporters of these governments are sympathetic to Indigenous rights and title, and do not want to see these rights trampled by government and industry. This puts some pressure on the two levels of government that would likely not exist to the same extent for a more conservatively oriented government, such as the former Harper Conservative federal government. Indeed, just days ago, the B.C. government and Wet’suwet’en hereditary chiefs announced a reconciliation process. Additionally, it is possible that repercussions from the recent resignation from federal cabinet of Jody Wilson-Raybould will play a role in these dynamics.

While there are many differences, there are a number of interesting similarities (and potential similarities) between contemporary Indigenous struggles in Canada and those of African Americans in the U.S. during the civil rights movements. I will touch upon just one here, concerning framing and the potential for international pressure. Social movement scholar Doug McAdam has argued that during the early days of the civil rights movement in the U.S., the Cold War between the Soviet Union and the U.S. served as a contextual backdrop. McAdam asserts that during this period the USSR was able to embarrass the U.S. over its treatment of African Americans, and that this indirectly led to some of the advances in civil rights that eventually occurred. Could a similar dynamic occur in relation to UNDRIP? This is another potential political opportunity if allies outside of Canada pick up on this frame.

While things have quieted down somewhat since the initial RCMP raid, it is unlikely that this story has come to an end. Protests like this tend to rise and fall like waves. Indeed, the Wet'suwet'en hereditary chiefs were parties, along with members of the Gitxsan First Nation, to one of the most important series of court cases with regard to aboriginal rights and title, Delgamuukw v. The Queen, which played out in the 1980s and 1990s. Perhaps this story is destined to come full circle.