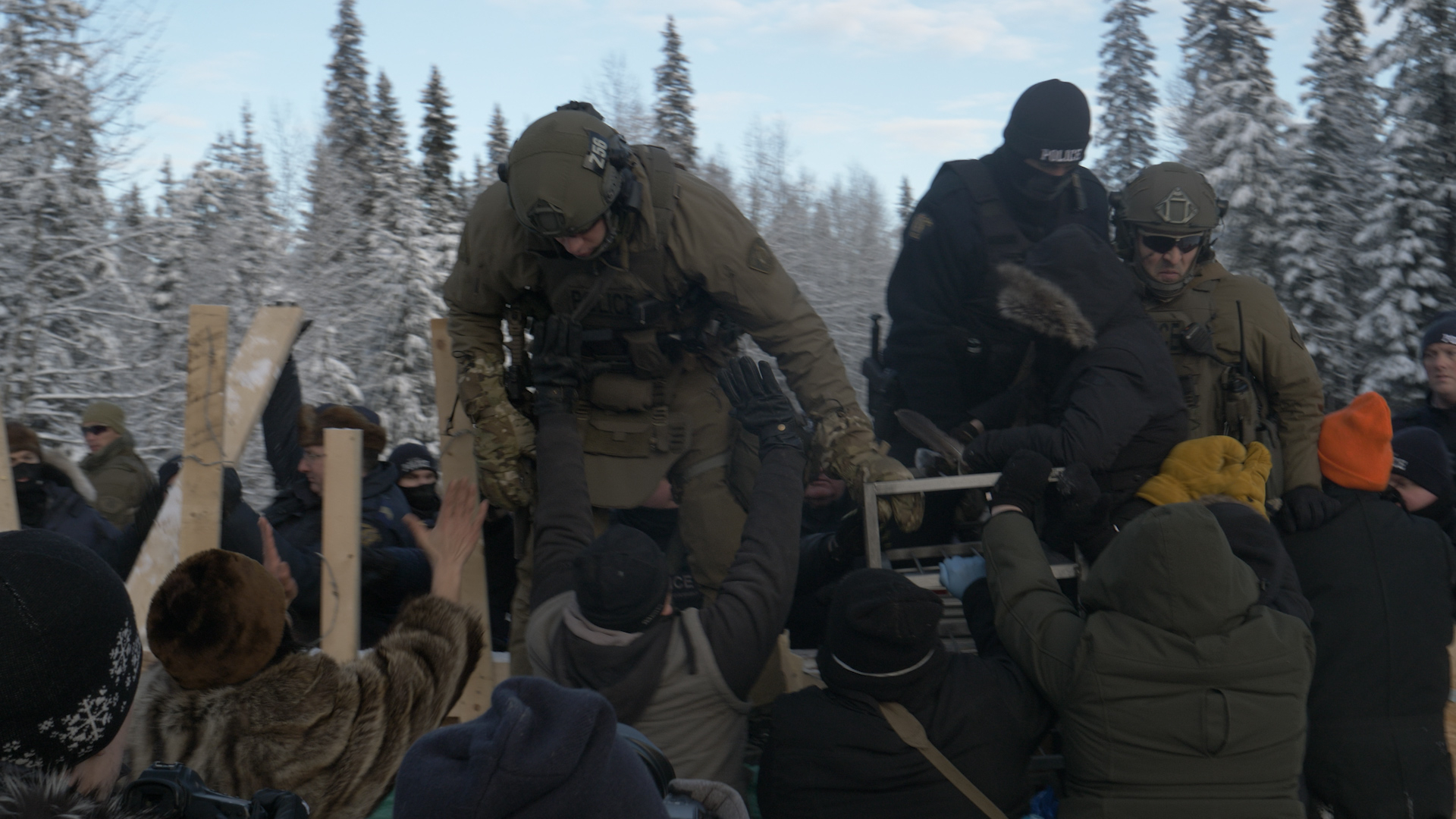 RCMP officers move in to break up a camp on Wet'suwet'en territory in northern B.C. on Jan. 7, 2019, to make way for construction of the Coastal GasLink pipeline. Photo by Michael Toledano
Previous story
Next story

First Nations leaders from across British Columbia gathered in Smithers Wednesday for a powerful show of support for the Wet'suwet'en Nation and all those standing up to defend Indigenous governance systems, human rights, and the well-being of lands and waters for all people in generations to come.

"The hereditary leaders from across British Columbia stand behind the Wet'suwet'en and the assertion of their traditional laws. This morning hundreds of hereditary leaders, supporters and allies from across British Columbia gathered on Wet'suwet'en territory to stand in solidarity with the Wet'suwet'en chiefs as they affirm their title, rights and responsibilities to protect their ancestral lands," said Dinï ze’ Na’Moks (hereditary Chief John Ridsdale), reading a joint message from the chiefs at a press conference in Smithers on Wednesday morning.

On Jan. 7, 2019, RCMP officers, sporting sunglasses and heavy helmets, armed with assault rifles, batons and bullets, faced off with Wet'suwet'en community members and supporters who stood together to defend their lands on a cold winter day, using prayers, songs and feathers as defense.

The RCMP were enforcing an interim injunction against the Gitdumt'en clan checkpoint blocking access to the Coastal GasLink Pipeline project on Morice West Forest Service Road. Hereditary chiefs say the area is their territory, which was never ceded to Canada under any treaty.

RCMP aggressively forced entry at the checkpoint as supporters of the Wet'suwet'en Nation screamed and begged the men to question their actions. Cries fell on deaf ears and the violence ended with 14 arrests of Wet'suwet'en supporters.

Videos and photos of the attack spread like wildfire across social media and triggered massive responses of Indigenous solidarity across B.C., Canada and the world. Indigenous leaders, hereditary and elected alike, signed declarations of support and held community gatherings, as marches rallied thousands of people from coast to coast to coast.

Following the arrests, the Wet'suwet'en hereditary chiefs met with RCMP officers over three days of talks and made a temporary truce on January 10, in order to protect their people, chief Risdale emphasized at Wednesday's press conference. Smithers is halfway between Prince George and Prince Rupert in northwestern B.C.

"The hereditary chiefs maintain that, not only are their peoples right to protect their lands, but even Canada's laws are on our side. They ignored their own laws, we followed ours," Chief Risdale said. "Our rights to these lands have never been extinguished. The assumed and presumed jurisdiction of the provincial and federal government is misleading and false. Today's show of support from our neighbours and allies around the world proves the Wet'suwet'en do not stand alone."

The Wet'suwet'en hereditary chiefs have maintained their use and occupancy of their lands and hereditary governance system for thousands of years. The chiefs are the title holders and maintain the authority and jurisdiction to make decisions on their unceded lands. Coastal GasLink pipeline attained the interim injunction to remove the blockade to pipeline construction by showing agreements with the elected chiefs and council of the Wet'suwet'en nation.

In 1997, the Wet'suwet'en celebrated a victory in the Supreme Court of Canada in a groundbreaking case known as 'Delgamuukw v. British Columbia.' The court affirmed that the Wet'suwet'en have never ceded title to 22,000 square kilometers of land in northern B.C. In the decision, the court recognized the hereditary chiefs as the rightful decision-makers on their lands. The chiefs and councils in Canada are elected under the Indian Act from the 19th century. While approval for the pipeline has been granted by elected leaders, Wet'suwet'en hereditary chiefs have never signed on.

"We have won court cases, in the B.C. Supreme Court and the Canadian Supreme Court," said Chief Risdale. "Those who came into arrest Wet'suwet'en people defending their lands broke Canadian and British Columbian laws."

Following speeches by Wet'suwet'en hereditary chiefs, hereditary chiefs and leaders from other First Nations took to the mic, introducing themselves in their languages and declaring their support, on behalf of their nations, for the Wet'suwet'en people, their traditional governance system and their rights, lands and waters.

"We're here today in support of you. We stand with you. The RCMP, they have been after our people for hundreds of years, and yet you stand strong. I see pictures of elders being thrown on the snow with plastic tied to their wrists and still you don't back down, you stand, you still song your songs, you still have your history, you still have your stories," said chief Murray Smith (Algmxaa), representing the Gitwilgyoots Tribe of Lax Kw’alaams. "You are in charge of your land, make no mistake about it. We are in charge of our land. At times, we need to rely on each other for support. The greatest support is when we stand together as one."

Kukpi7 Wayne Christian, a Tribal Chief from the Secwepemc Nation has worked with the Wet'suwet'en Nation over the years, on their groundbreaking child wellness plan.

"It's important we know and understand that our way of life as a people is under attack, because they're removing you from your land, home, house, using force," said Chief Christian. "The laws of the land, even the rule of law of Canada is not being enforced for us, but it's being enforced for profit and gain. The world is watching as our way of life is being attacked. The land is us and we are the land."

On Jan. 8, hereditary chiefs from the Heiltsuk Nation signed a letter of solidarity in support of Wet'suwet'en hereditary chiefs. The following day, Heiltsuk youth interrupted a meeting with provincial negotiators in council chambers in Bella Bella, to add their voices to their nation's show of support. Heiltsuk hereditary Chief Harvey Humchitt spoke about the catastrophic Nathan E. Stewart oil spill in their territories in October, 2016.

"It only takes one incident, one oil spill, one pipeline break," Chief Humchitt said, adding his voice to the small army of Indigenous leadership present at the historic gathering in Smithers. "We have the same vision, and we share it with one another. We need to be able to protect our lands. We cannot sit back and watch as development goes on. There has to be consultation and there has to be approval by the hereditary system."

Ayla Brown, an elected councilor on the Heiltsuk Nation tribal council spoke next.

"We're here to say we stand with you. Not just in words, not on paper, but to be with you, because the land is healing and is at the center of who we are as Indigenous people. Without our connection to the land through generations of culture and language, we would be nothing. What you do is sacred," Brown said.

Brown is an elected leader, but she comes from the house of a hereditary chief, through her father λáλíyasila Frank Brown. Brown said the media has made "a lot of fuss about division," focusing on the difference of opinion and authority between elected and traditional leadership. She pulled out a banner sent to the Wet'suwet'en, on behalf of the Heiltsuk Tribal Council that reads "Heiltsuk Hemas (hereditary chiefs) and Heiltsuk Tribal Council support the Wet'suwet'en. "There is no division here," she said.

Other speakers included representatives from the Gitxsan, Haida, and Tsimshian nations, as well as Grand Chief Stewart Philip of the Union of B.C. Indian Chiefs and Freda Huson, spokesperson for her clan, the Unist’ot’en House. Following the conference, the group ate and then marched through downtown Smithers. Meanwhile, in Vancouver, supporters for the movement blocked a rail line across Vancouver's Venables Street.

At present, RCMP continue to monitor and enforce what they are calling "exclusion zones" on Wet'suwet'en territories, events in support of the nation continue across the province, country and world. Over 50 solidarity gatherings are planned in Burnaby, Bellingham, London, North Bay, Roberts Creek, Sointula, Sudbury, Windsor. A benefit concert will take place in Vancouver this Saturday, in support of the Wet'suwet'en.

blame Turdeau he needs the

blame Turdeau he needs the money .for him