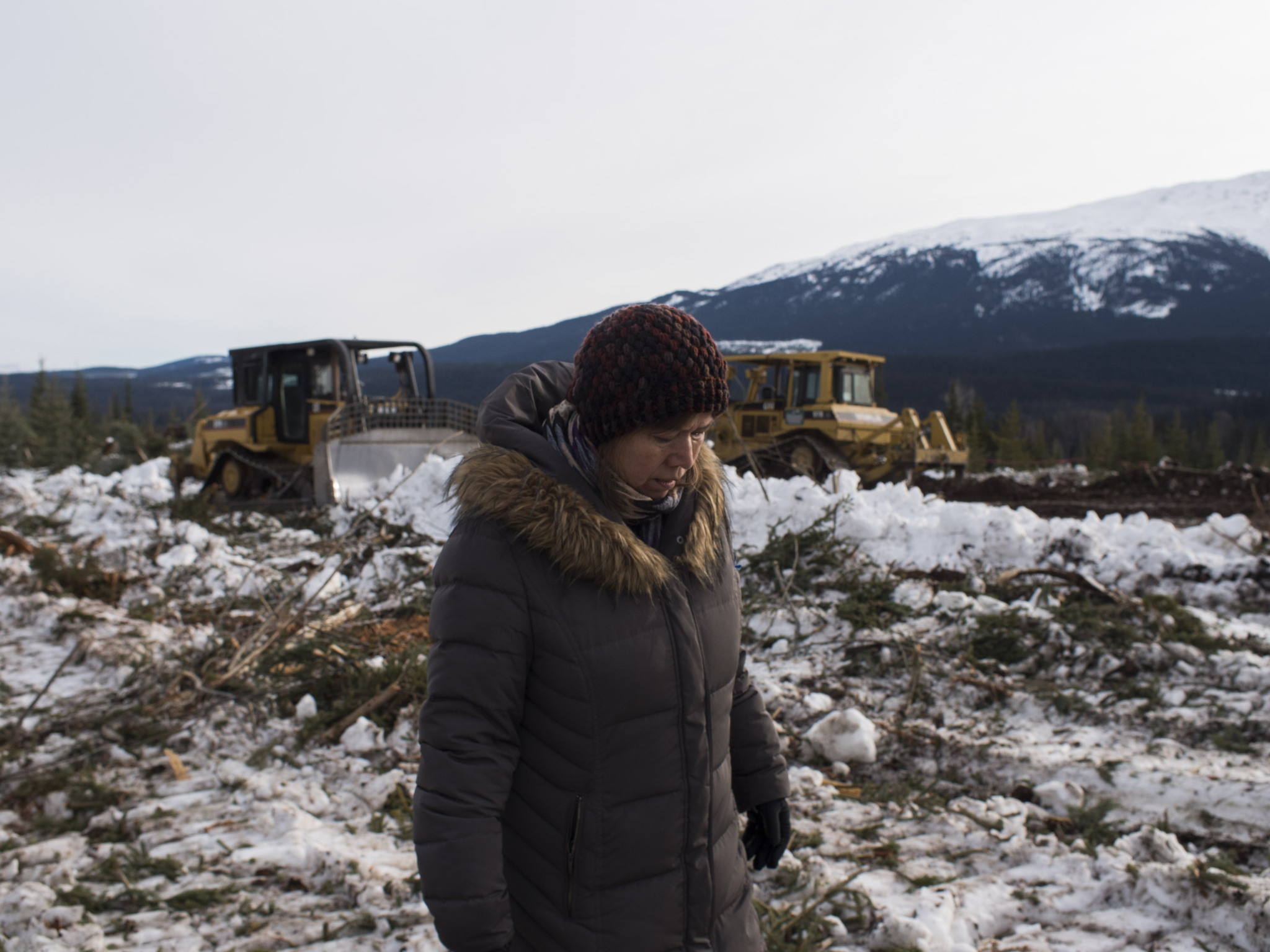 A subsidiary of Calgary-based energy company TransCanada bulldozed through traplines and personal property from two different clans of the Wet'suwet'en Nation last week, while the RCMP enforced an interim injunction requested by the company so that it could proceed with construction. Some Wet'suwet'en members said the RCMP illegally prevented them from entering their own territories, violating the nation's rights.

"They bulldozed through one of our traplines, pulled them out and clearcut the area," Freda Huson, spokesperson for the Unist'ot'en House, told National Observer on the phone Monday morning. "The police told us the interim injunction against us overrides the traplines. The injunction says we can't come within 10 metres of the work area, but our traps are outside of the 10 metres."

Huson was one of two individuals named on an injunction served to the community on November 26, 2018. The injunction was approved by a B.C. judge, allowing TransCanada's Coastal GasLink subsidiary to remove the gate that blocks access to the road leading to the pipeline site.

RCMP Media Relations officer Madonna Saunderson told National Observer in an email that the Mounties have received complaints from both the Wet'suwet'en and Coastal GasLink regarding traplines and removal of personal property items in the Houston area.

"We are following up on all complaints and continue to facilitate ongoing and direct dialogue between all parties regarding various issues," Saunderson wrote. "Our role is to keep the peace and enforce the court ordered injunction."

Members of another Wet'suwet'en Clan, the Gitdumt'en Clan, set up another check-point, outside the injunction zone, shortly after the original injunction was served. TransCanada immediately filed for an amendment to the injunction, to include the second road block and on Dec. 21, 2018, B.C. Supreme Court Justice Marguerite Church ruled in favor of the amendment.

Hereditary chiefs and some other members of the nation have questioned the validity of the interim injunction, since the company used support from contested leadership, as evidence of consent. Wet'suwet'en leaders, hereditary chiefs, matriarchs, spokespeople and community members, continue to demand that they are the only authority over their traditional territories, through a governance system that was also recognized and upheld in the Supreme Court of Canada in 'Delgamuukw v. British Columbia.'

Despite ongoing opposition to the validity of the interim injunction and to the pipeline in general, on Jan. 7, 2019, RCMP officers, armed with assault rifles, batons and bullets, crossed the fence to the Gidimt'en checkpoint, and arrested 14 people there to protect their rights and territories. B.C. RCMP officers and spokespeople for TransCanada said at the time that the aggression was their last and only viable option to moving the project forward.

The moment RCMP came over the gates and started making arrests to enforce the Coastal GasLink injunction. pic.twitter.com/n6Cy1RLUu4

The arrests have sparked reactions around the world, including marches and rallies of support across the country for the Wet'suwet'en Nation. Wet'suwet'en hereditary chiefs met with RCMP officers over three days of talks and on Jan. 10, the parties came to an agreement, in order to protect their people, hereditary Chief Risdale had emphasized at a press conference following the talks.

A press statement released by B.C. RCMP Communication Services on Jan. 14, said the RCMP were "in the process of bringing in our temporary detachment that will support the safety in the area for all persons," but spokespeople for the Unist'ot'en House and the Gidimt'en Clan say their rights are not being protected, as access to their territories has been denied and property destroyed.

Since the truce, TransCanada has continued construction activities, working between 6:00 a.m. and 6:00 p.m., as mandated by the interim injunction.

The latest developments occurred on Friday, Jan. 25, as company workers bulldozed a trapline belonging to members of the Unist'ot'en House. This trapline had been set well before the injunction was served, and Huson said that TransCanada had no authority to destroy it. Huson also alleged that the recent activities violate Section 46 of the provincial Wildlife Act, which says "a person who knowingly damages or interferes with a lawfully set trap commits an offence."

Under conditions of the Environmental Assessment Office (EAO) and the B.C. Oil and Gas Commission (BCOGC), pipeline companies are required to complete site-specific archeological surveys, before undertaking any clearing work on proposed man-camp sites. In their injunction application, TransCanada acknowledged that these archeological surveys had not yet been completed, and the Office of the Wet'suwet'en and Unist'ot'en House both confirm that they have not received evidence of these legally required site-specific surveys.

Huson said the surveys are critical, as many of the proposed work sites include historical encampments, artifacts and grave sites.

The Unist'ot'en House has called for immediate stop-work orders, to address and investigate potential and ongoing violations of the conditions of their Environmental Assessment Certificate and BCOGC permits. They are currently consulting with legal experts to understand how to continue to assert their rights and address violations under Canadian laws. Their rights and responsibilities under ‘Anuc niwh’it’en (Wet'suwet'en laws) remain clear, members stress.

"It feels like our hands are tied," Huson said. "Our people keep getting threatened for arrests. Our ceremony sites are blocked. They're backing an illegal project that's destroying peoples' livelihoods."

The Environmental Assessment Certificate also requires that the pipeline company notify all tenure holders in the area affected by pipeline construction, six months before construction activity that could impact their tenure. "Chief Knedebeas holds trapline tenure for the Unist'ot'en territory and was notified by the company that site clearing and construction on Camp 9A would not begin until 2020," Huson said.

Kent Karemaker, media relations spokesperson for the B.C. Ministry of Energy, Mines and Petroleum Resources confirmed that the Environmental Assessment Office (EAO) Compliance and Enforcement (C&E) received complaints relating to the construction activities of the Coastal Gaslink by the Wet'suwet'en.

"EAO C&E has since been in contact with the Oil and Gas Commission (OGC), the Conservation Officer Service as well as other relevant provincial agencies," Karemaker told National Observer in an email. "The EAO C&E will be conducting a joint site inspection with the OGC this week to evaluate the complaint directly. We anticipate that it will take some time subsequently to determine whether any non-compliances are evident and, if so, the appropriate enforcement action."

"Everybody is so exhausted. The company doesn't work on Sundays, so we did ceremony all day Sunday," she said. "They're not telling us anything. The only time we get information from them is when they're making demands. It feels like all the officials, the government, and police, are all backing the project and acting as security for the company."

The agreement made between the RCMP and hereditary chiefs on Jan. 10, states that "there will not be any RCMP interference with Wet'suwet'en members regarding access to their territories for the purposes of trapping and/or other traditional practices," but Huson said the agreement has not been upheld. RCMP officers have threatened trappers with arrest for attempting to access their traplines, and warned patients of the Unist'ot'en Healing Centre that they could be arrested for participating in ceremony, she said.

According to a press statement released by the Unist'ot'en Camp, RCMP officers escorted TransCanada employees into active work zones, and refused access of Unist'ot'en members to attend ceremony and check on the safety of participants who were beyond active workzones.

I've lost track of the number of spurious RCMP visits to #Unistoten since the gate came down. A seemingly endless stream of new officers introducing themselves, passing through, demanding to speak with chiefs for no apparent reason. This is interfering with the Healing Centre. pic.twitter.com/HHIMFbEnyY

"Today is the day we usually check the traps, mostly for martins. Our trapping subsidizes us, things we need for ourselves and for the healing centre," Huson said. "Between December and February are our months for trapping, but they're impacting our ability. Wolverines and lynx will come and eat what we trap."

Huson said the company cut their traps down and put them in a pile beside the trapping cabin while their people were blocked out from the area. Members were only able to assess the damage after the company had moved out and access was again granted.

"We are witnessing the police break all of the agreements they have made with our chiefs and watching them actively protect the Coastal GasLink pipeline and its contractors, as they violate the Wildlife Act and conditions of their permits," Huson wrote in the press statement released Monday morning. "We opened our gates, assuming everyone would be treated equally under the law. TransCanada is breaking all of their own Canadian laws, while we are upholding Wet'suwet'en laws and responsibilities to the land."

On Jan. 25, TransCanada employees destroyed Gidimt'en cultural infrastructure and personal property on Gidimt'en territory, also without the clan's consent, Wet'suwet'en members say. According to a press statement released by the Gidimt'en Access Point, TransCanada destroyed property in an area where the company has not obtained permits, and an area not included in their proposed plans.

"Coastal GasLink did not provide any copies of permits for work to be undertaken in Gidimt'en territory, nor does our cultural infrastructure constitute an 'obstruction' within the limits of the interim injunction," Monday's press statement said. "The RCMP have been notified of TransCanada's illegal activity under their own law, and the Wet'suwet'en Access Point on Gidimt'en territory is pursuing criminal charges into destruction of property and mischief."

Jen Wickham, a spokesperson for the Gidimt'en Access Point, told National Observer that they would be seeking thousands of dollars in compensation for damages done to their property.

"They have no legal permit to enter our territory," Wickham said over the phone. "They said they have a work permit, but they have yet to produce one. They said they would leave one at the RCMP office in Houston, but it's not there yet. I suspect they will be running out to apply for a permit."

Wickham called the company's actions "devastating," saying that the infrastructure was being used and would have continued to be used for cultural workshops, like rabbit snaring and hide tanning.

"They've demolished hope for the Gidimt'en territory," Wickham said. "RCMP say they're there to keep the peace and make sure there's nothing illegal happening, yet they stood by and watched TransCanada destroy personal private property. It just confirms that the RCMP aren't there to protect us. They're there to protect industry and corporate interests and that has always been the case."

This article was updated on January 29, 2019 at 10:15 a.m. PT to include a comment by a spokesperson of B.C. Ministry of Energy, Mines and Petroleum Resources.

Without a doubt, we live in

Without a doubt, we live in an oligarchy. Just try to fight the big corp and you will be taken down.

Imagine that. A Canadian

Imagine that. A Canadian politician manipulated and deceived an indigenous community. I don't think that's ever happened before in this history of this structurally, systemically racist apartheid state.

So vey sad. Has this country

So vey sad. Has this country ever been more divided?

Our PM's make a big show of

Our PM's make a big show of apologies to First Nations people for past transgressions including residential schools. How long will it take to cease current illegal and immoral activities targeted at First Nations people in support of fossil fuel activities. Is their any honour among politicians and thieves? Somedays it's difficult to tell the difference.

Why not spend money on non-invasive, renewable energy development that will keep oil workers employed, create economic development for First Nations people and help meet the goals of the Paris Accord. Citizens need to make reasonable voices heard and help drown out the noise from the right wing, fossil fuel, greed driven minority?

Situations like this reveal the essential role of police forces is to protect the interests of the ruling class. Any international laws or rulings that prove an impediment or inconvenience to that reality can be safely ignored.