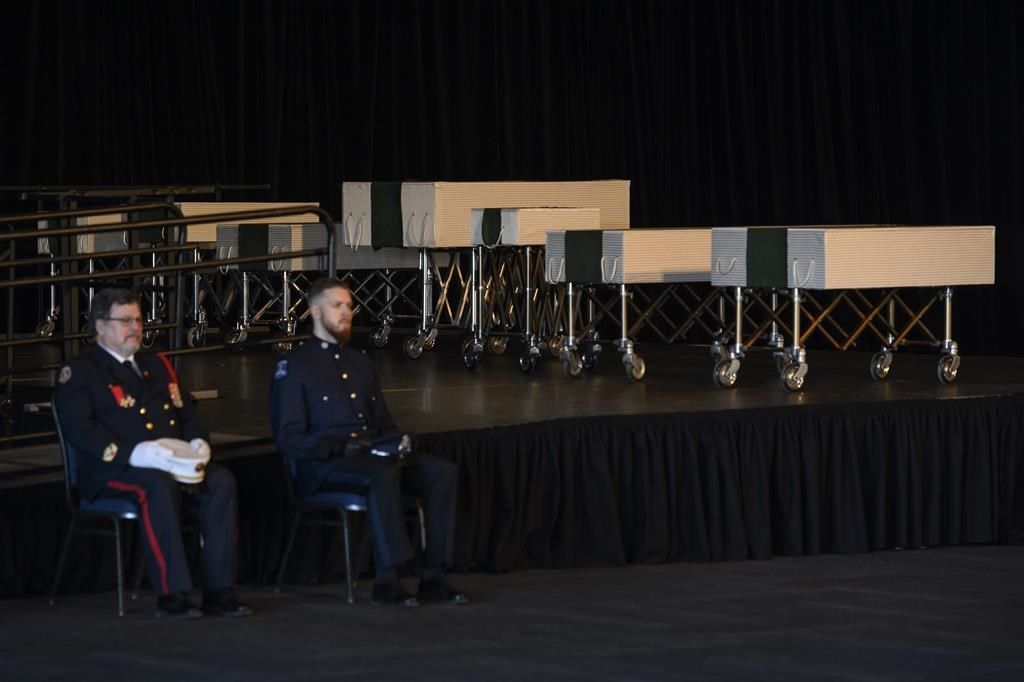 Caskets of the seven Barho siblings rest on a stage behind Halifax Fire and Police honour guard during the funeral for the Syrian refugees in Halifax on Feb. 23, 2019. Photo by The Canadian Press/Darren Calabrese
Previous story

One by one, seven small white caskets were carried inside a cavernous waterfront hall on Saturday, where thousands of mourners gathered for an emotional embrace of grieving parents who lost their children in a devastating house fire.

Seven black hearses lined up under the cold winter sun, the caskets brought inside the Cunard Centre by an honour guard.

As they filled a stage, a heartrending sobbing could be heard, the anguish of a woman who lost all of her children in Tuesday's fast-moving fire, and whose husband was in hospital being treated for severe burns.

Mourners offered love and support to Kawthar Barho, who arrived in Canada with her family 18 months ago as Syrian refugees.

But the overwhelming devastation of losing seven children in one night — from an infant baby to a teenager — hung heavy over the funeral.

"I've done many funerals but nothing like this, so please bear with me," an overwhelmed Sheikh Hamza said as he offered the ceremony's English sermon.

More than 2,000 people attended the two-hour service, with every seat filled and hundreds more people standing.

Imam Abdallah Yousri said he hoped opening the ceremony to the public would allow Barho to see the entire community had been united in sympathy.

"On what is our darkest day, we see the best of humanity when we look out into the sea of faces in front of us," said Natalie Horne, vice-president of the community group that sponsored the Barhos' refugee claim.

"Our lives were enriched as a result of our relationship with you and your children," Horne told Barho through tears. "We love them and we love you."

"Together our community will find ways to honour your memories," the city's deputy mayor, Tony Mancini, said after reading the names.

"I encourage each of you to use the sadness we share as a community to fuel acts of love and kindness towards our family, friends and neighbours."

It was a common theme throughout the funeral — a desire for the tragedy to lead to love and unity.

"Life is short and temporary. Live it the best way possible," Hamza said.

Nova Scotia deputy premier Karen Casey told Barho "we will not abandon you. We will not leave you alone."

Halifax MP Andy Fillmore told Barho the community would be there for her in the hard times to come. But he acknowledged it's family that brings the greatest comfort, and said the federal government is trying to bring her overseas relatives to Canada quickly.

"We are working as hard as we can to get your family here as quickly as possible so they can be by your side," Fillmore said.

Mourners, Muslim and non-Muslim alike, said they came because they had been deeply affected by the tragedy, and wanted to show their support for Barho as she faced unimaginable grief.

"She doesn't know me, I don't know her, but I know I'm here. And she's our family — their whole family is our family. I want to be here for all of them," Cindy Samson said in an interview.

Adnan Aboushahla said it was a "shock for anyone — not only for Muslim people, but for Christians and other religions," to witness such a tragedy.

"We want to do whatever we can — either give support, money, feelings, this grief," said Aboushahla.

Peter Andrews, Halifax fire deputy chief of operations, said it was a "huge honour to be invited to participate in this family's darkest day."

He said none of the firefighters that responded to the horrific blaze were part of the funeral's honour guard.

"We put on a brave face today," he said. "We'll grieve in our own way in the weeks ahead."

The children's father, Ebraheim Barho, remained in hospital Friday recovering from extensive burns. He was in critical, but stable condition.

The cause of the blaze in the Halifax suburb of Spryfield early Tuesday remains unclear.

Mourner Tareq Hadhad, a Syrian refugee who founded Peace by Chocolate in Nova Scotia, said it is hard for the parents to handle all the pain by themselves.

"I would say it's the most devastating period that I have ever lived, even though we lost family members back home in Syria. The loss of seven kids at once really has had a very devastating impact on the entire community here," he said.

Mourner Mouna Manna praised the outpouring of support, and said the mother's burden is unimaginable.

"I don't even know where to begin to imagine how this would be, to lose not one or two but seven of them all at once ... it's a huge, huge devastation," she said.

The scale of the tragedy for the young family that arrived in Nova Scotia in the fall of 2017 as refugees has struck a chord with Canadians.

A GoFundMe campaign had raised about $585,000 by Saturday evening.

The Barho family lived in Elmsdale, a 30-minute drive north of Halifax, when they first arrived in Nova Scotia, and were embraced by residents there.

They moved to the Halifax suburb of Spryfield to take advantage of language training and other immigrant services, and had planned to return to Elmsdale next month.