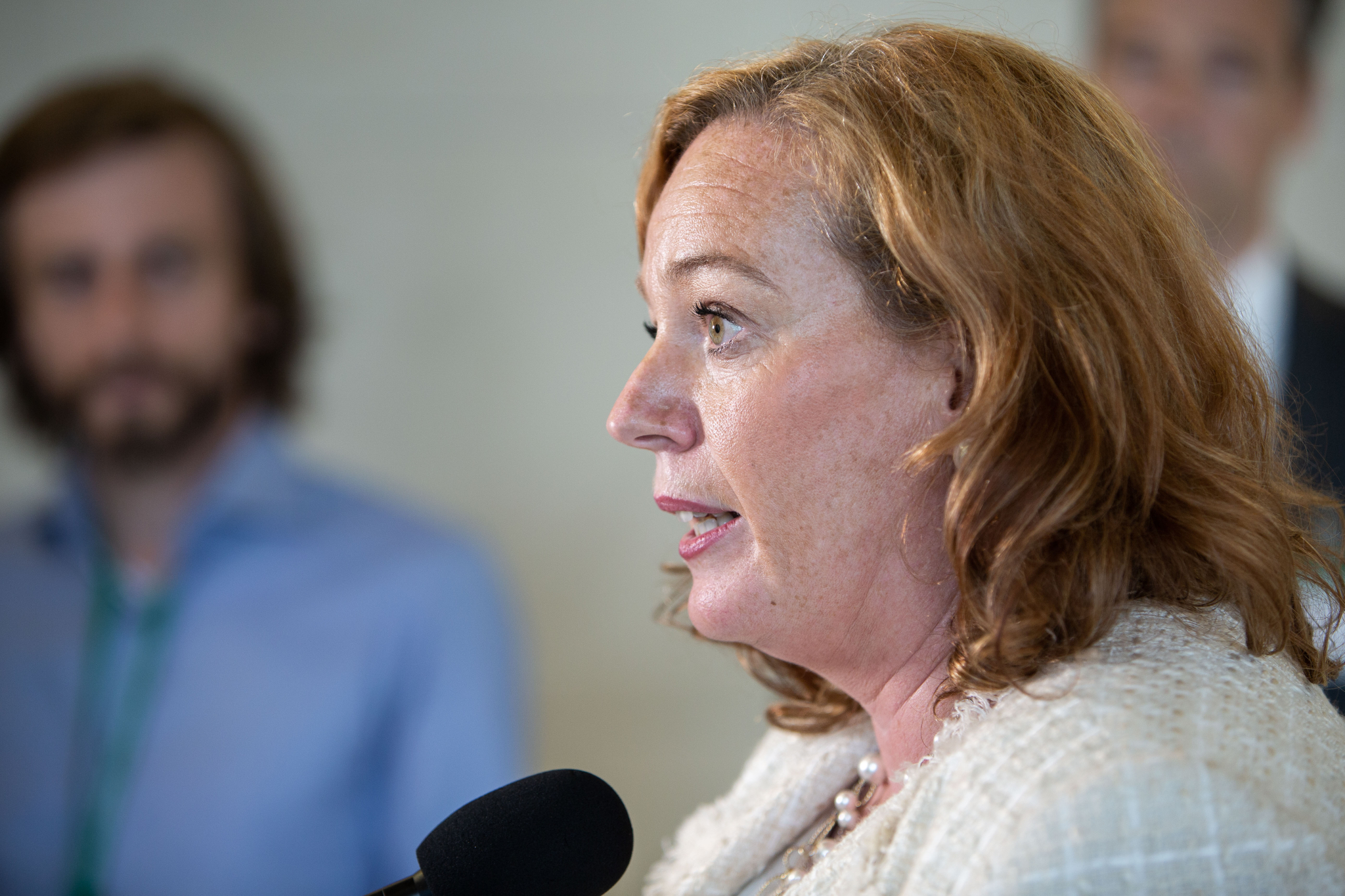 Sherri Taylor is a mom of five from Windsor, Ontario, whose eight-year-old son, Elijah, was diagnosed with autism four years ago.

For years, Taylor has been fighting the government to include alternative treatments like speech physiotherapy in the Ontario Autism Plan — treatments she says has helped bring about "astronomical" changes in her son. Taylor previously worked as an educational assistant at the York Region District School Board. After moving to Winsor in 2008, she took on a new position in 2016 as a family care coordinator for a private occupational therapist. In this role, she is able to provide support that helps families with children like her son.

Initially, she was hopeful about working with the new Progressive Conservative government after getting an invitation from the office of Ontario Social Services Minister Lisa MacLeod.

The minister wanted Taylor to attend a "pub night" in Windsor on Jan. 24.

There, she met MacLeod's policy director, Susan Truppe, and chatted about the province's autism policy. Truppe asked whether Taylor could provide some supportive comments about MacLeod's plans to overhaul the provincial autism funding program, and began an email exchange to follow up.

"I really felt listened to when I talked to (Truppe)," Taylor said in an interview. "I actually felt hopeful that this government would do the right thing that would truly listen and that would try and fix the mess that they were left with. Instead they've just made it worse."

Taylor was hesitant from the moment Truppe responded to the quote she had written with edits in a Jan. 25 email.

Truppe made some grammatical edits too, asking Taylor to remove a few words, "...and then we could add the government is on the right track ...” she told Taylor.

Taylor responded on Jan. 28, saying that she would be “rewriting the quote with (Truppe's) suggestion,” but that she was concerned about adding the suggested line of the government being on the right track, making it clear that she didn't know where the province was headed.

“Currently the system is certainly broken from the Liberals but I don't know the plan that the PC Government has for overhauling the system so I am not sure that I can say that," Taylor wrote.

On Feb. 6, Ontario's Progressive Conservative government proposed changes to the provincial autism program that would see funding be distributed on the basis of age and household income beginning April 1. At the time, the government said it would clear the 23,000-child waiting list by spreading resources among all families.

The announcement has triggered intensive debates in the Ontario legislature that escalated following revelations in media reports on Feb. 25 that MacLeod had ordered a freeze on services offered to families on the waiting list.

One day later, MacLeod's ministry confirmed the details of its February 6 autism announcement by releasing the sliding scale for means-testing, which shows that families making $55,000 or less would receive 100 per cent of the possible funding. Families raking in $250,000 or more would not have access to the funding.

The scale is dependent entirely on the child’s age. Parents say intensive treatments cost up to $80,000 a year. (Taylor told National Observer she has spent $60,000 over three years for her son's treatment, and would not be eligible under the new funding model).

Despite staunch criticism of the plan, MacLeod has defended her efforts. On Monday, she read off a list of accolades from Ontario parents and healthcare workers for her autism plan during the provincial legislature's question period — including Taylor's.

It said, in part: "Parents need to have services available to them before their child is no longer a child. Families need more support and choice for their children with autism ... our government is heading in the right direction, recognizing that early intervention is key."

“I appreciate Sherri’s sentiments. She is one of the hundreds of families that we’ve been working with throughout the vast number of months in order to course-correct so that 23,000 children will get off that wait-list," MacLeod said.

Taylor took to social media the next day to say the quote was taken out of context, which she called “proof of [MacLeod’s] manipulation, and outright untruths to the public.”

“How DARE you serve your political needs by manipulating my words and my intentions? How DARE you use my quote in Queen’s Park to make it look like I wrote to you AFTER the announcement in support of a plan that will harm our children? How many other quotes have you manipulated? How many other parents have you used? How can anyone trust that the stories you read in Queen’s Park have any shred of truth to them?” Taylor wrote in a Facebook post.

In an interview, Taylor said she hadn't heard from MacLeod's office since Feb. 6, on the day of the government's announcement. She emailed Truppe on that day to ask for details and clarity about the funding change, receiving a brief response that indicated parents would get a choice about "what they think is best for their child."

She sent subsequent emails on Feb. 7 and Feb. 14 to press for more details while explaining that parents saw the new policy as a "big disappointment." But Truppe failed to respond.

Prior to the announcement, she also exchanged emails with Truppe on Feb. 3 after MacLeod's office had asked Taylor to write a supportive op-ed.

When Taylor sent it to her, Truppe said she'd show it to the ministry's communications department for feedback.

"They may have to take a bit out of the top but not sure. I think the op ed as a whole, shows the story. Very good. I think what will happen is that the comms (sic) dept will give me a couple of emails for you to send them. Newspapers are particular that the person writing must be the person sending the op ed," Truppe wrote.

In the end, Taylor said she opted not to submit her op-ed to any newspaper for publication.

But Truppe reached out again to speak to Taylor on Tuesday, following her criticism aimed at MacLeod for taking her comments out of context.

NDP MPP Lisa Gretzky also raised the issue in the legislature, challenging MacLeod’s use of the quote during Tuesday’s question period. Taylor said it prompted a "panicked phone call" from Truppe.

"She never contacted me ahead of time to ask if she could use it in that context," Taylor told National Observer. "It was certainly manipulated into what they wanted it to say and that quote was written before the announcement was ever made."

MacLeod told the legislature Tuesday she thought Taylor provided the quote to her office for use, adding, “But if I used that quote used yesterday incorrectly, I unequivocally apologize.”

Taylor doesn't accept the apology. "I would never support their plan. Their plan is beyond unreasonable. It is going to send families in even greater crisis them where they were before this plan was put together," she said, adding that she has asked MacLeod to resign or for Premier Doug Ford to reshuffle the cabinet.

Taylor has also extended an invitation to both MacLeod and Ford to visit her clinic, and apologize to her in person.

"They have no interest in actually working with us as parents," she said. "They could say it all they want but if they've manipulated my quote and then gone and read it making it seem like I wrote that in support of her plan, how many other stories has (MacLeod) read in Queen's Park that are an outright lie or that have been used or manipulated in the wrong way?"

"I thought that I was making a difference so I just feel fooled," Taylor added. "I don't know what to think or trust I know that I cannot trust their office at this point in time. I know that I can't and will never trust Lisa McLeod to make the right choice."

The parallels between this

The parallels between this issue and the latest SNC Lavalin fiasco are striking - except that this deals with children, which should make it out-of-bounds for political bungling! Kudos to Sherrie Taylor for advocating for her son against such shameful odds!!