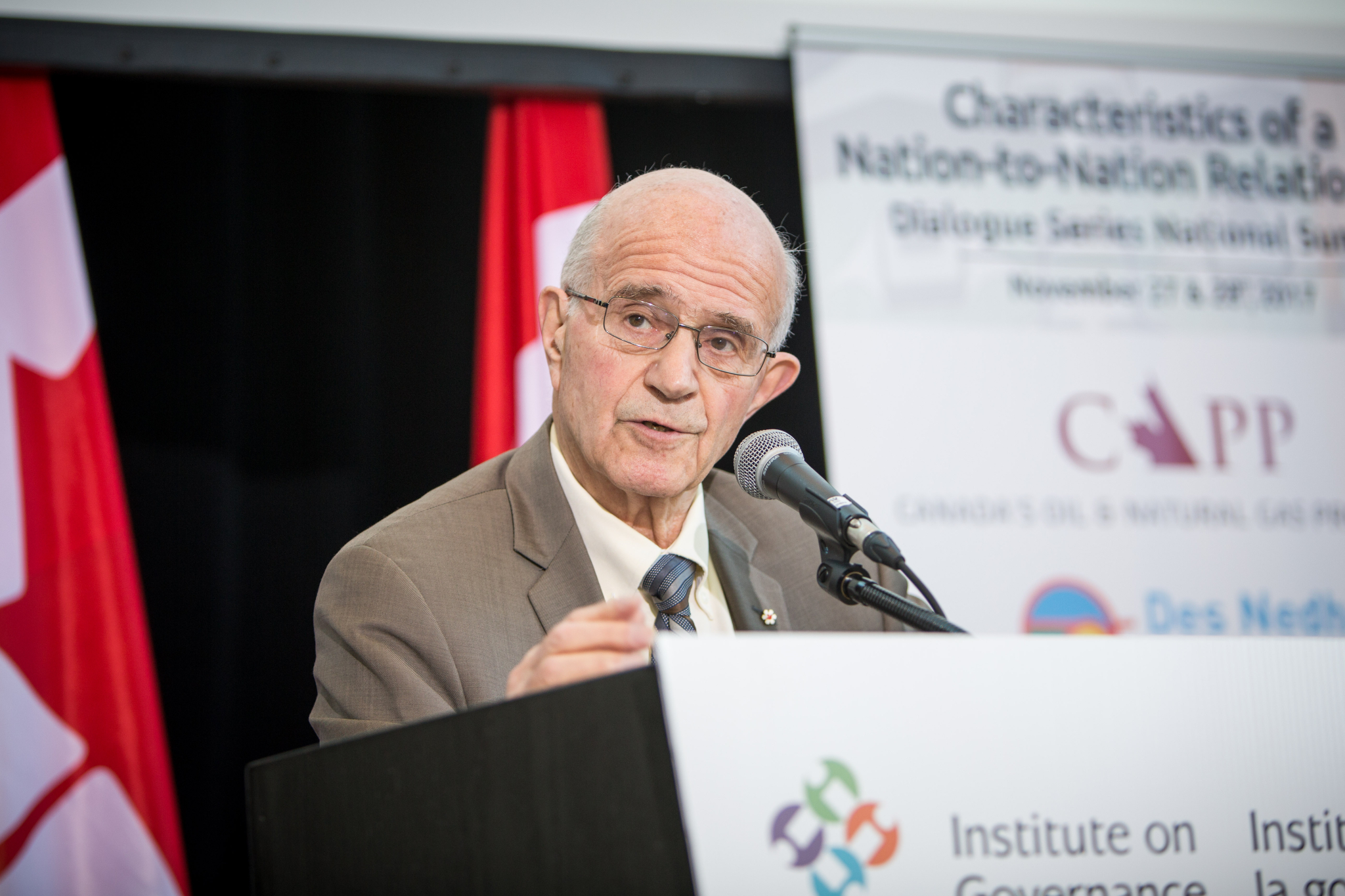 Retired Supreme Court justice Frank Iacobucci speaks at an event hosted by the Institute on Governance in Ottawa on Nov. 11, 2017. File photo by Alex Tétreault
Previous story
Next story

Frank Iacobucci's name popped up a couple of times in Jody Wilson-Raybould's bombshell Feb. 27 testimony before the House of Commons justice committee about allegations of political interference in her last months as attorney general of Canada.

Some First Nations in British Columbia will also recognize the name from recent invitations to attend talks about the Trans Mountain pipeline expansion project.

Iacobucci is a retired Supreme Court justice and lawyer for Torys LLP, whom Quebec engineering and construction company SNC-Lavalin hired to help it secure a plea deal and avoid a criminal conviction on corruption charges.

Wilson-Raybould told the Commons committee that his name came up during a conversation between a member of her staff and Ben Chin, chief of staff to Finance Minister Bill Morneau on Sept. 11, when Chin "noted" that the retired judge was representing the Quebec company.

About a week later, Wilson-Raybould heard his name again during a chat with the government's top public servant, Michael Wernick, who is clerk of the Privy Council Office in Canada.

"The clerk brought up job losses and that this is not about the Quebec election or the PM being a Montreal MP," Wilson-Raybould said, recounting a Sept. 19 meeting with Wernick. "He said that he understands that SNC is going back and forth with the (director of public prosecutions), that they want more information. He said that 'Iacobucci is not a shrinking violet.'"

Two weeks after that meeting, Prime Minister Justin Trudeau's government announced a new job for Iacobucci on Oct. 3, 2018. The retired judge, still representing SNC-Lavalin, was now being appointed as Trudeau's special envoy for discussions with First Nations in British Columbia about the Trans Mountain expansion project.

'We're unclear if the Liberal government even realizes the conflict'

At the time, the government said Iacobucci's role would be to help ensure that Canada was engaging in a meaningful dialogue with First Nations to correct the mistakes which led the Federal Court of Appeal to conclude it had failed in its duty to consult the affected Indigenous communities and quash the government's original approval of the pipeline.

Jody Wilson-Raybould said Canada's top public servant told her that Frank Iacobucci "is not a shrinking violet." The retired Supreme Court justice, now in the news over his role as lawyer for SNC-Lavalin, is also PM Trudeau's special envoy on #TMX

Now, a prominent First Nations leader in British Columbia says it's time for the retired Supreme Court justice to quit one of those two jobs.

“I do not feel that Justice Iacobucci can negotiate with those whose consent must be freely granted before the Trans Mountain project can proceed, since it’s unclear whose interests he is really representing,” Chief Judy Wilson, the secretary-treasury of the Union of British Columbia Indian Chiefs (UBCIC), told National Observer in a telephone interview on Monday.

“We’re unclear if the Liberal government even realizes the conflict, but we call upon the federal government to ask Frank Iacobucci to step down from one of these positions,” said Wilson, a representative of the ​​​Neskonlith Indian Band within the Secwepemc Nation.

Iacobucci's high profile job revolves around the public prosecutor's decision to seek a criminal trial against SNC-Lavalin or bribery of Libyan officials between 2001 and 2011.

He has pursued this case in recent months, while also taking a seat across from representatives of First Nations whose lands stand in the path of the proposed Trans Mountain pipeline expansion, which Ottawa bought for $4.5 billion from Kinder Morgan in May last year.

The Trudeau government has denied any conflict of interest surrounding Iacobucci's appointment, noting that the former judge is an esteemed member of the Canadian legal community.

'What kind of consultation is this?'

Those that Iacobucci has come across since picking up the Trans Mountain file warn he and the government are repeating the same mistakes that doomed the previous process.

The UBCIC's Wilson sent a letter to Iacobucci just ahead of a Dec. 10 roundtable on consultations he hosted at Thompson River University in Kamloops, pointing out that Ottawa was selectively choosing which bands and chiefs to engage with.

Three Secwepemc members on site were barred from attending that closed-door event with Iacobucci, protested, and were arrested and charged with mischief. (“I am not mischief, I am Secwepemc,” Mayuk Manuel, one of those arrested, said at the time.)

“What kind of consultation is this, if people are getting barred from going in and trying to hear what was being said?” Wilson asked this week.

In her letter to Iacobucci last year, she declined the invitation to send a spokesperson and another representative from their community, explaining that the entire Secwepemc Nation decides on matters related to their unceded territories. She added that the Indigenous Advisory and Monitoring Committee, a small group of government and Indigenous representatives, could not speak on behalf of the entire Secwepemc Nation.

"Secwepemc people collectively are the proper decision-making authority for Secwepemcul’ecw lands and waters, not individual Indian Bands, whose federally-delegated authority is limited to reserves, and who cannot provide the consent of the whole Nation," she wrote.

"We have never provided and will never provide our collective free, prior and informed consent — the minimal international standard — to the Trans Mountain Expansion Project."

Charlene Aleck, an elected councillor from the Tsleil-Waututh Nation, agreed there didn’t seem to be any more openness or changes from the government officials who are consulting Indigenous peoples about the project.

If built, the Trans Mountain expansion would triple the capacity of crude oil and other fossil fuel products that could be brought from near Edmonton in Alberta to a waterfront terminal in Burnaby, British Columbia, which is on traditional Tsleil-Waututh territory — land that has never been ceded to Canada under any treaty.

“I don’t see anything different (in) the way that they're operating and running their round of consultations and ideas for the communities or First Nations,” she said in an interview with National Observer.

She added that the government doesn’t appear to have an open mind or a desire to encourage First Nations rights, in the spirit of reconciliation.

'Not a shrinking violet'

The UBCIC's Wilson said Iacobucci would ideally step down from his role leading the Trans Mountain expansion consultations, but should at least choose to remove himself from one of the files.

Wilson said the government's handling of both files showed a startling lack of transparency.

“With SNC, we don’t know what was said to Minister Jody Wilson-Raybould or in the thousands of lobby meetings between SNC and the government," she said. "We also don’t know how Trans Mountain was handled in the inner core of the prime minister’s office and the various ministries involved, especially now that they are owners of the pipeline.”

She pointed out the SNC-Lavalin could clearly benefit from construction and engineering contracts if Trans Mountain gets built.

SNC-Lavalin employs about 9,000 people across Canada who work on projects in a variety of sectors, including oil, gas and pipelines.

A spokesman for SNC-Lavalin declined to comment when asked about Iacobucci's dual roles. Iacobucci didn't respond to a request for comment.

In May 2018, Canada’s elections watchdog laid charges against a former SNC executive, accusing him of orchestrating illegal federal political donations the company made, mostly to Liberal groups, as well as to Conservatives, more than a decade ago.

During an emergency debate about the SNC-Lavalin scandal on Feb. 28, Green Party Leader Elizabeth May stood in the House of Commons to muse about Iacobucci's role in two key files it is juggling.

"Frank Iacobucci is not a shrinking violet. He is playing an interesting role here. I wonder if my friend finds it's curious in any way that SNC-Lavalin's lawyer was the choice of the prime minister to run the Indigenous consulations in the repairing of the flawed consultations on the Kinder Morgan pipeline," she said, during an exchange in the Commons with Conservative MP Michael Barrett, who represents the Ontario riding of Leeds-Grenville-Thousand Islands. "And he is still playing that role, while he is also SNC-Lavalin's lawyer."

Barrett responded by saying that nothing surprises him at this point.

So, here we go. Iacobucci,

So, here we go. Iacobucci, lawyer for SNC Lavalin, also working on the Trans-Mountain negotiations. And who gets to benefits from the TMX construction. SNC Lavalin. Surprise, surprise!Is there only one corporation that matters to Trudeau in this country?!

It is surprising and

It is surprising and disappointing that once again, we have someone who ought to know better, failing to see an obvious conflict of interest. I thought the former Justice was a very good member of the Supreme Court, but this behaviour is really disappointing. Instead of being a great Canadian, he is now to be remembered as a "fixer" for one of the most corrupt corporate regimes in the world, that just happens to be located in Quebec.

Disappointing behaviour from a formerly respect jurist. He should know better. Apparently not so much. Thankful for a real media in Canada.