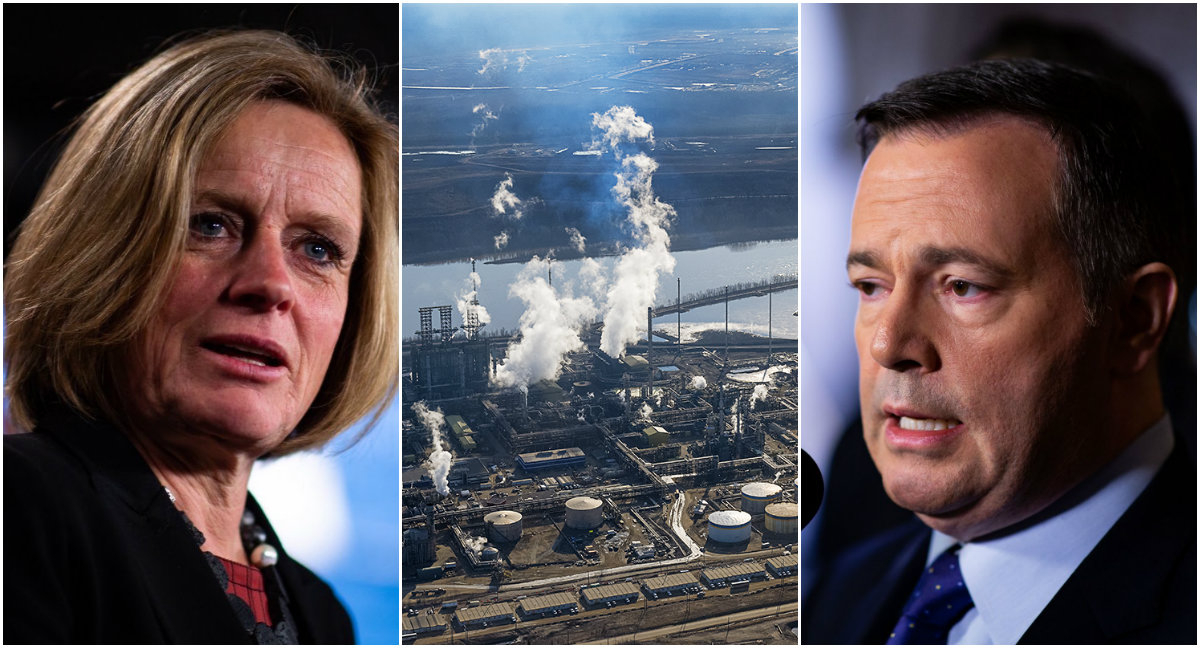 Whichever one of you is entrusted with the opportunity to lead Alberta into the future after the provincial election, here is what you need to know to navigate the most challenging issue in your province’s history — the era of stranded assets in the oilsands.

The Alberta oilsands sector is a mature sector, not a growth sector. It has entered the phase in its lifecycle where corporate boardroom discussions have transitioned from the inevitability of rapid oilsands expansion to how best to sustain current production. In this phase of the oilsands lifecycle, Trans Mountain’s expansion is obsolete.

No amount of market intervention or increased oil industry subsidization can alter the course these captains of industry are on. However, that will not stop them from angling for taxpayer handouts by pretending another wave of oilsands investment is just beyond the horizon. The more taxpayer money they can convince all levels of government to transfer to their corporate treasuries, the easier their transition off fossil fuels becomes.

The idle promise of further oilsands investment is the likely motivation behind the Trudeau government quietly negotiating such a sweet toll rate deal for Trans Mountain’s shippers last fall. Despite Finance Minister Morneau’s promise to Canadians that it would not happen, Trans Mountain has agreed to provide oil producers who use the existing line with a $2 billion toll subsidy over three years mounting to a $3.4 billion toll subsidy over five years.

Efforts to maintain production levels — as distinct from intentions to expand production — are reflected in oilsands producers’ final investment decisions, share repurchase and dividend policies, lobbying efforts, downsizing and layoffs, increasingly limited access to lending, and clever avoidance of growing environmental liabilities. Not all companies will survive the next decade — and they know it.

There are other signs that the oilsands’ expansion scenario is done, such as the recent corporate exodus from the sector. Statoil, Marathon Oil, Royal Dutch Shell, Total, Murphy Oil and ConocoPhillips have all significantly reduced or completely divested their oilsands assets. Husky thought it might like to take over oilsands producer MEG Energy but backed away from its bid. Most recently, Devon announced its wish to unload its oilsands holdings.

For its part, the natural ecosystem has made it clear it will no longer permit oilsands growth, even if the market could support it. Bitumen reserve extraction is the most extreme source of greenhouse gas emissions in Canada. Fueling climate change through oilsands expansion must stop if Albertans are to have a future worth walking into.

It is folly for you to cling to an exaggerated and unrealistic supply outlook for oilsands growth when industry, the ecosystem and the world marketplace have moved on.

Imperial Oil recently announced it is re-evaluating whether to proceed with its 75,000 barrel a day Aspen project. What this means is Alberta can only expect about 175,000 barrels a day of additional supply from projects that are in construction. By 2022, market conditions are telling us that oilsands supply will begin a gradual decline as existing extraction projects are depleted.

The lack of investment in expanding the oilsands means supply will be insufficient to support Trans Mountain’s expansion.

Insufficient supply to ship along Trans Mountain’s expansion is not the only commercial reality sounding a death knell. The project’s mounting capital cost is also a project killer.

Trans Mountain’s contract with shippers requires that the current capital cost for the project be fully passed on in the toll rates charged to oil producers who have signed long-term take or pay contracts.

This is a whopping commercial burden. With Enbridge Line 3 and Keystone XL as viable alternatives at lower cost, Trans Mountain is out of the running as a desirable transportation option.

There are 13 oilsands producers who have signed long-term take or pay contracts for 707,500 barrels a day of capacity on Trans Mountain once the system is expanded. All contracts are for twenty years except for one that extends for 15 years. Contract terms are clear. These shippers must bear the project’s current capital cost in their toll rates on a pro rata basis for the capacity they signed onto. Shippers agreed in February 2017 to tolls triggered by the full cost of a $7.4 billion budget.

For example, Cenovus signed on for 125,000 barrels a day to ship dilbit to the Westridge dock. This means Cenovus is on the hook for almost 20 per cent of Trans Mountain’s expansion cost, whether the company needs the capacity or not.

In February 2017, Cenovus agreed to a fixed and variable cost to deliver its dilbit to the Westridge dock in Burnaby at about $5.75 per barrel compared to the $3.15 per barrel Cenouvs currently pays for capacity on the 65 year-old pipeline.

Fast forward more than two years and capital costs have increased significantly. Ottawa refuses to advise Canadians how much the likely cost of the project has increased as a result of the delay caused by losing at the Federal Court of Appeal, but it has cost the project dearly.

An equally significant reason project costs have climbed is because the budget in February 2017 was quite preliminary. Kinder Morgan made a habit of overrepresenting the progress of Trans Mountain’s expansion and underrepresenting its likely cost.

The company even went so far as to forget about the time required to meet NEB condition compliance, so it could mislead the public about the project’s in-service date. “Facts tell us that Trans Mountain’s expansion could never have met a December 2019 in-service date, and Kinder Morgan knew it.”

Despite Kinder Morgan’s claims that it was ready to proceed with construction during the fall of 2017, the company was not. A number of agreements with contractors had not been signed, and numerous line items were not nailed down. This is still the case. It is likely that the project’s capital cost has risen to more than $10 billion.

For a company like Cenovus, a capital cost in the neighbourhood of $10 billion means the delivered cost to the dock has risen by more than $2 per barrel. It will cost Cenouvs about $7.75 a barrel just to get its dilbit to where it can be loaded onto a tanker. Add in almost $6 per barrel to get it to Asia and it’s easy to see how compromised access to Asia has become — somewhere around $14 per barrel.

Meanwhile, heavy oil prices in the Gulf Coast are much higher than across the Pacific. What’s more, the U.S. market — where they actually have capacity available to process Alberta’s heavy oil — is less expensive to reach.

Why would oilsands producers, with insufficient supply, risk staying committed to Trans Mountain’s expansion under these expensive commercial terms? Unless these shippers are offered even greater subsidies than they’ve already received through toll reductions on the existing line, it’s very likely they won’t.

Trans Mountain’s contracts with shippers are not firm. I appreciate that the NEB and Ottawa say they are firm, but this is not the first time the NEB has misled Cabinet or Ottawa has misled the public about the financial viability of Trans Mountain.

All you need do is read Clauses 3.2(b) and 5.4(d) of the Firm Service Agreements (FSAs) to confirm for yourselves that Trans Mountain’s shippers can walk from the expansion project.

Don’t look to the shippers for clarity because they can’t tell you they are getting ready to abandon the expansion. Clause 2.2 of their contract requires that they support the project until a NEB certificate has been received.

The reason the shippers are now free to abandon the project is because the NEB certificate of pubic convenience and necessity (CPCN) was nullified when the Order in Council approving it was quashed by the Federal Court of Appeal on August 30, 2018.

Shippers who signed contracts must receive a CPCN cost estimate “together with a revised Fixed Toll’ after a certificate is issued, as they did in February 2017. Once a certificate cost estimate much higher than $7.4 billion is presented to them, each shipper will assess whether they want to tie themselves to pipeline tolls for decades into the future on a project whose costs are out of whack and whose capacity they don’t really need.

Trans Mountain’s shippers may try to rip a page out of Kinder Morgan’s playbook and hold Ottawa hostage by threatening to abandon the expansion project unless further toll subsidies are offered. Don’t count on Canadian taxpayers being willing to stand for this when the drain on the public purse for purchasing Trans Mountain has reached $10 billion.

To recap the $10 billion price tag to date, there’s $3.4 billion over five years for a toll subsidy on the existing pipeline, $6 billion for the taxpayer funded Oceans Protection Plan over twenty years, which shippers told the NEB they expected to pay, and $500 million for pipeline spill financial assurances, not to mention the fact that taxpayers — not shippers — are picking up the tab for the marine recommendations attached to the NEB’s Reconsideration Review.

Canadians are increasingly aware of the boondoggle Trans Mountain’s purchase has become and have little tolerance for more subsidies.

Terminating Trans Mountain’s expansion avoids throwing more money at an industry in decline when fiscal resources are needed to invest in sectors that offer the planet, and our children, a future.

The days of rapid oilsands expansion are not numbered, they are over — big business, the economy and ecosystem say so. No amount of taxpayer funded subsidies can incentivize oil producers to invest in oilsands expansion when they must put their efforts toward sustaining output. Trans Mountain’s expansion makes no financial or economic sense for an industry at this stage of its life cycle. Politicians that don’t get in line will be left behind.

Ms. Notley and Mr. Kenney, stop wasting valuable time. You need to direct your leadership energies to consideration of an Alberta without Trans Mountain’s expansion.

May the first candidate with the courage to face this new era win.

Unfortunately, politics is not a rational exercise. In Alberta, the tribe is paramount.
Sadly, Robyn Allan's appeal to reason will fall on deaf ears. Rachel Notley and Jason Kenney are not rational actors. Both are inextricably invested in the myth of perpetual oilsands expansion. Both are mired in denial. Their grasp of climate science — the true scope of the peril before us — is tenuous at best. Short-term electoral interests, however misguided, shall prevail. The pursuit of power trumps reason.

Our house is on fire. Nothing will stop Notley and Kenney from fanning the flames and fuelling the fire. No one has done more than Notley to fuel the pipeline hysteria that will sweep the NDP away in the coming election.
For industry-captured politicians, the public interest is hardly top of mind. Neither Notley nor Kenney has the interests of future generations at heart. Notley spends her time, energies, and political capital flouting logic and flogging figures that have no basis in reality. The facts have long ceased to be relevant.

Alberta is headed for the cliff. Notley and the NDP can thank their lucky stars that they won't be at the wheel when we go over the brink.
Brace for impact.

Robyn, thanks for all of the

Robyn, thanks for all of the reading you must have done to calculate these failures, this ignorance and greed. I can't imagine the number of legal documents you must have reviewed. But there it is in black and white. And the Conservatives would have done no better. Waiting patiently for your next analysis.

Alberta may indeed be headed

Alberta may indeed be headed over a cliff. But we can take comfort if Ms. Allan is correct about the end of tar sands expansion. It's time to get serious about climate change and building more fossil infrastructure is not the way to do that.