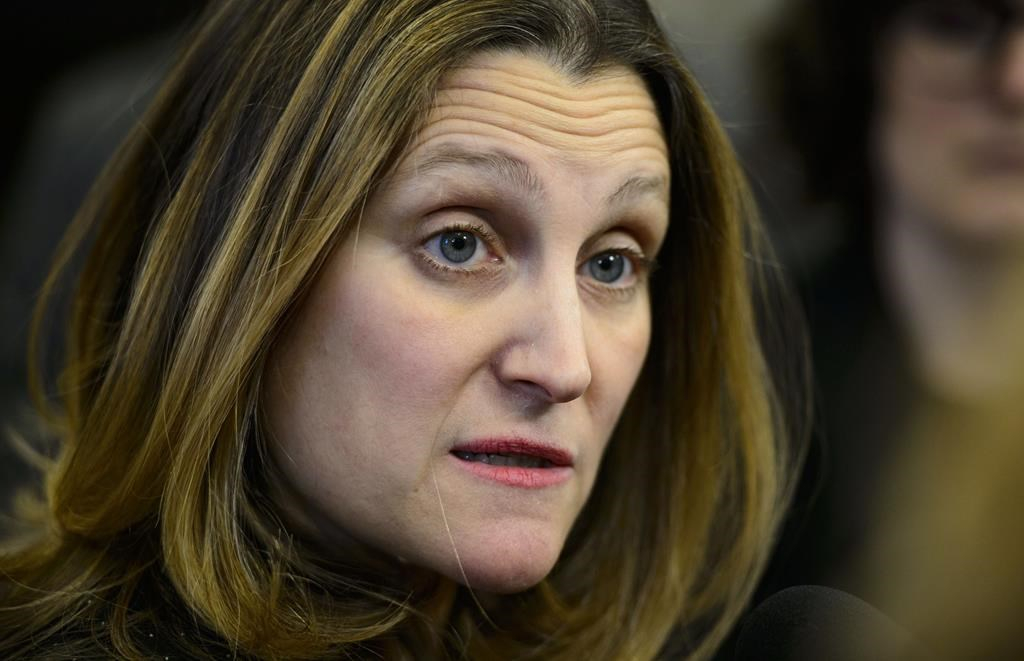 Freeland's remarks — in an email to The Canadian Press — came hours after Chinese Foreign Minister Wang Yi told a Beijing news conference his country would take "all necessary measures" to defend Chinese companies and citizens abroad against "deliberate political suppression."

The latest round in Canada's diplomatic dispute with China came as a new poll was released Friday by the University of British Columbia that cast new light on the deterioration of Sino-Canadian relations since the Meng affair.

Meng is wanted in the U.S. on fraud related charges in connection with violating sanctions on Iran — allegations China angrily dismisses as a politically motivated attack.

The U.S. Senate foreign-relations committee introduced a measure this week that commends Canada for arresting Meng Wanzhou in Vancouver to fulfil an American extradition request.

The joint Republican and Democratic effort recognizes Canada for upholding the rule of law and expresses concern over actions by China in response to the U.S. request. It calls on China to release Canadians Michael Spavor and Michael Kovrig, who were jailed by Beijing authorities following Meng's arrest.

"Canada appreciates these bipartisan efforts in the U.S. Senate to pass a resolution echoing our call for the release of Mr. Spavor and Mr. Kovrig and recognizing Canada's respect for the rule of law," Freeland said.

Freeland also noted that Canada appreciates the support of Australia, the European Union, France, Germany, the United Kingdom, the Netherlands, Latvia, Lithuania, Estonia, Spain, the Czech Republic, Denmark, and NATO, "who have spoken in support of these detained Canadians and the rule of law."

Freeland has been working behind the scenes with American lawmakers to court their support for the resolution, say sources familiar with her efforts, but who were not authorized to speak for attribution about them due to the sensitivity of the situation.

Last month, Freeland lobbied Republican Sen. Lindsay Graham at the Munich security conference in Germany, and she pressed the issue with Democratic lawmakers in Washington as well, sources say.

"Canada has provided consular access and due process for Ms. Meng. It is only right for the Senate to join Canada in expressing concern over arbitrary detention and mistreatment of Canadian nationals by the Chinese government," said Republican Sen. Jim Risch, the chair of the committee.

"I commend Canada for its commitment to transparency and upholding the rule of law and its willingness to do the right thing in the face of significant and unjustified pressure from the Chinese," said Menendez. "In contrast, China's actions in seizing Canadian nationals in an apparent act of political retaliation, subjecting them to what appears to be arbitrary detention and mistreatment should be deeply troubling to all members of the international community."

The Chinese ambassador to Canada has warned the Trudeau government not to court international support against it, saying that would only worsen tensions.

Freeland responded to the American support after a visibly angry Wang gave a defiant answer at a Beijing press conference about Huawei.

"We also support companies and individuals using legal weapons to protect their rights and interests and not to be silent lambs," he added, raising his right hand into a fist.

During a spring 2016 press conference at the headquarters of Canada's foreign ministry in Ottawa, Wang berated a Canadian reporter — angrily pointing a finger at her — for asking him an "irresponsible" question that was "full of prejudice" about his country's human-rights record.

Friday's friction was reflected in the results of a poll released by the School of Public Policy and Global Affairs at UBC which surveyed 1,161 respondents between Feb. 4 and 19, with a margin of error of 2.9 per cent. The Qualtrics survey asked the same questions as in 2017 and 2018 and found that only 22 per cent of Canadians had a favourable image of China, down 14 points.

Respondents also expressed low satisfaction with how the government tries to protect Canadian imprisoned in China. Eighteen per cent answered positively, up six points, but the number giving the government a thumbs-down rose 11 points to 42 per cent.

"Overall, Canadian opinions of China and the Chinese government are increasingly negative but expectations of the relationship have shifted only slightly," write Paul Evans and Li Xiaojun of UBC.

"What appears to be changing is the sense that Canada is more alone in the world than it was in 2017, more anxious about interactions with China in high-tech sectors, and more worried about threats to domestic values and institutions at home and to Canadians abroad."