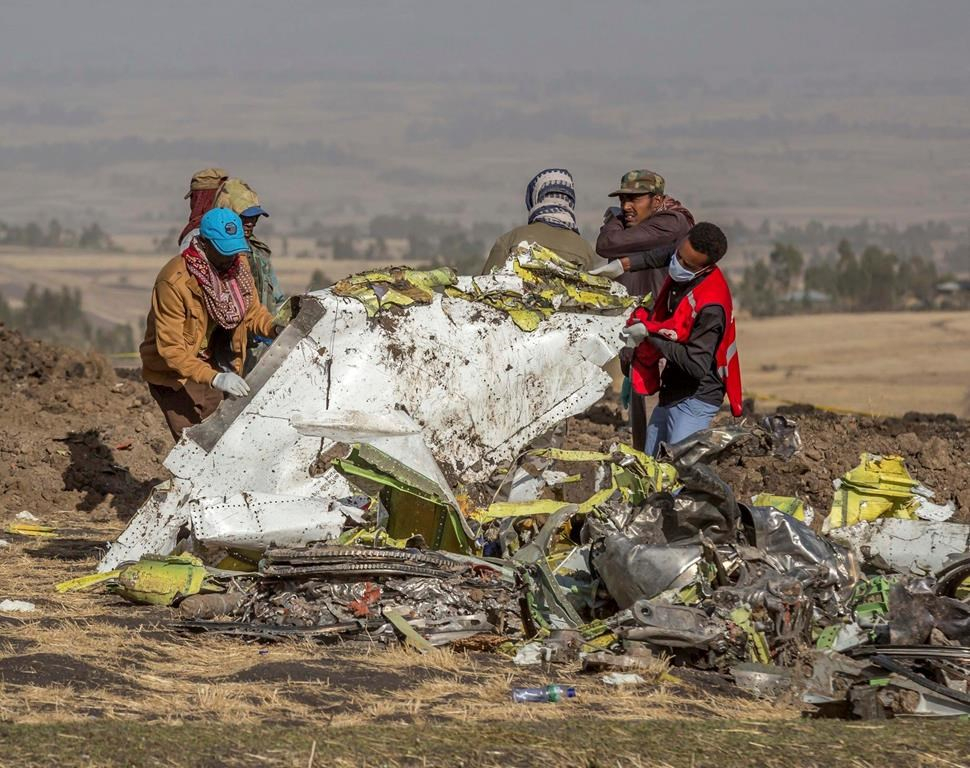 Rescuers work at the scene of an Ethiopian Airlines flight crash near Bishoftu, or Debre Zeit, south of Addis Ababa, Ethiopia, on Monday, March 11, 2019. Photo by The Associated Press/Mulugeta Ayene
Previous story
Next story

Tributes poured in Monday for the victims of a plane crash in Ethiopia, many of whom were humanitarians, environmentalists and aid workers who had dedicated their lives to making the world a better place.

Eighteen Canadians were among the 157 passengers and crew who died Sunday when an Ethiopian Airlines plane went down shortly after departing from the Ethiopian capital of Addis Ababa.

United Nations Secretary General Antonio Guterres led the tributes by recognizing the impact of the crash on the international aid community, noting 21 UN employees from around the world were among the victims.

"A global tragedy has hit close to home and the United Nations is united in grief," he said Monday. "(The victims) all had one thing in common — a spirit to serve the people of the world and to make it a better place for us all."

One of those humanitarian workers killed in the crash was Jessica Hyba, an external relations officer with the United Nations High Commissioner for Refugees who was based in Somalia at the time of her death.

Former coworkers sketched out a multi-decade career dedicated to the global good.

Kyle Matthews, executive director of the Montreal Institute for Genocide and Human Rights Studies at Concordia University, first met Hyba as their careers were getting underway at CARE Canada in 2001.

Matthews said Hyba, an Ottawa native, arrived after completing her studies abroad looking to get involved in humanitarian or development work.

"She was a very energetic person, a very positive person who tried to make a difference for people affected by war and persecution," Matthews said. "It's a real sad story."

CARE Canada said Hyba, who it described as a "dedicated humanitarian and loving mother," worked both in Canada and Indonesia in response to the Indian Ocean tsunami crisis.

"This tragedy has struck the humanitarian community hard and our thoughts are with all of those who have lost friends and colleagues," the group said in a statement. "We are reminded of the sacrifices humanitarian workers and their families have made through this work in an effort to save lives and help people overcome poverty."

Similar praise was lavished on Danielle Moore, 24, of Winnipeg, who was en route to the United Nations Environment Assembly in Nairobi, Kenya at the time of the crash.

Moore, a marine biology student who had just been accepted into an education program, graduated from Dalhousie University in Halifax in 2017.

Danielle was exceptional in every sense," Moore's thesis adviser Prof. Kim Davies said in an email. "She excelled at her studies, she was a kind and friendly person, and she was deeply devoted to environmental and human rights causes."

Davies said after graduating from Dalhousie, Moore returned to Manitoba where she worked for several non-governmental organizations, including the Canada Learning Code, a group dedicated to improving the accessibility of educational and technological resources for Canadians.

Also among the victims was Peter deMarsh, of New Brunswick, who was chairman of the International Family Forestry Alliance, an international group based in Luxembourg that represents more than 25 million forest owners worldwide.

Felix Montecuccoli, a board member with the Alliance, said deMarsh had been en route to a conference on financing for small farms.

David Coon, leader of New Brunswick's Green party, offered a tribute of his own to deMarsh on Twitter.

"Goodbye old friend," Coon wrote while offering condolences to deMarsh's wife and son. "You gave so much of your self in service to the common good."

Questions continued to swirl around the cause of the crash, which prompted officials in Ethiopia, China and Indonesia to ground their Boeing Max 8 aircraft.

Ethiopia's state-affiliated Fana Broadcasting Corporate reported Monday that the black box from the downed plane had been recovered, though it was partially damaged.

The accident was strikingly similar to last year's crash of a Lion Air jet that plunged into the Java Sea, killing 189 people. Both crashes involved the Boeing 737 Max 8, and both happened minutes after the jets became airborne.

WestJet and Air Canada, both of whom operate Max 8 aircraft, have indicated they intend to keep flying the planes and touted their safety performance in recent years.

Other Canadian victims of the crash included a mother and daughter from Edmonton, a renowned Carleton University professor, and an accountant with the City of Calgary.

Mohamed Hassan Ali said his sister, Amina Ibrahim Odowaa of Edmonton, and her five-year-old daughter, Sofia Faisal Abdulkadir, were on board the Ethiopian Airlines jet that crashed.

"(She was) a very nice person, very outgoing, very friendly. Had a lot of friends," Ali said of his sister, who was travelling to Kenya to visit with relatives.

Benoit-Antoine Bacon, the school's president and vice-chancellor, described him as a "global thinker," and a "towering figure in African and post-colonial scholarship."

Gladys Kivia, a domestic violence counsellor with the Calgary Women's Emergency Shelter, said her husband, Derick Lwugi, was also killed in the crash.

The accountant who worked for the city leaves behind three children, aged 17, 19 and 20, Kivia said. The couple had been in Calgary for 12 years, and Lwugi had been headed to Kenya to visit both of their parents.

— With files from Sidhartha Banerjee in Montreal, Michael MacDonald and Aly Thomson in Halifax and The Associated Press.