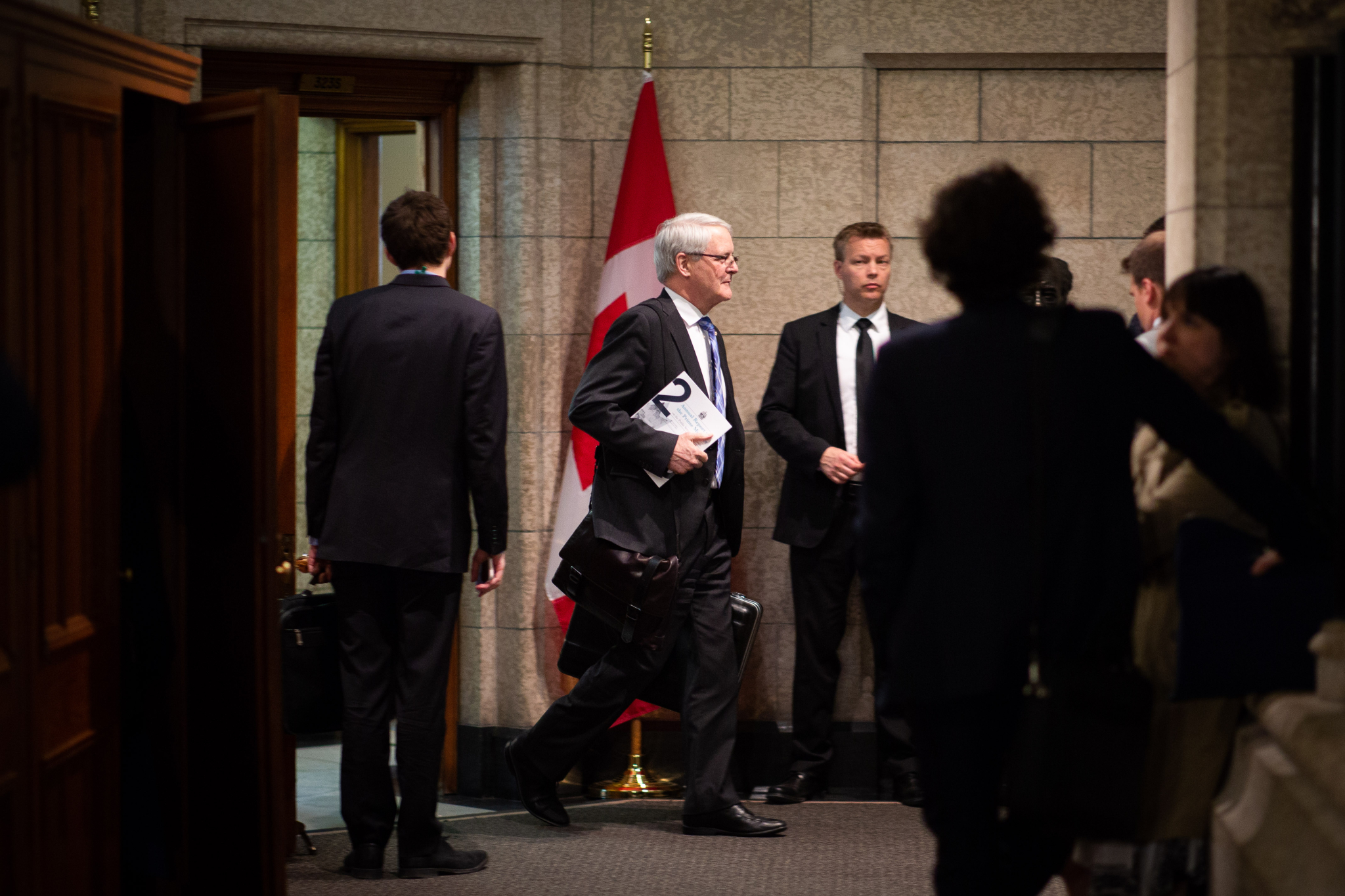 Transport Minister Marc Garneau has issued an immediate safety notice on the Boeing 737 Max 8 aircraft, effectively grounding them in Canada.

Hours after Garneau's news conference, the United States, under heavy pressure, followed suit and joined dozens of countries across Africa, the Middle East and Asia, including China, as well as the European Union who have ordered Max 8s grounded.

Transport Canada's notice Wednesday morning, restricting commercial passenger flights from any operator of Boeing 737 Max 8s and 9s from arriving, departing or overflying Canadian airspace, follows the death of 157 people Sunday in an Ethiopian Airlines crash, among them 18 Canadians.

The minister's comments at a press conference in Ottawa came two days after he told media he would board the Max 8 aircraft "without hesitation," warning against jumping to conclusions about causes of the crash.

Garneau said Wednesday he was issuing the notice as a result of new data he received that morning, March 13. U.S. authorities were informed the same day that Canada was taking action.

In the Lion Air flight, which killed 189 people, investigators determined that the aircraft's sensors were incorrectly calculating that the airplane's nose was too high. When the computer software automatically adjusted, it sent the plane plummeting.

Pilots struggled to regain control, but the software overpowered them and the plane crashed into the sea.

Garneau demonstrated on Wednesday how Ethiopian Airlines flight data suggested that a similar situation had occurred with that airplane. The pilot had also reported flight-control problems, an airline representative said Wednesday.

"The angle of attack sensor was faulty on the Indonesian flight, and essentially gave the impression that the nose was too high," said Garneau, who is a former astronaut. He angled his hand to demonstrate a plane climbing into the sky.

"The pilot said it’s not too high, so he countered that," he continued, gesturing as if to pull back on the yoke, or the control wheel that allows the pilot to manually lift the nose.

"Then a number of seconds later, the software kicked in again...eventually, unfortunately, the pilot lost that fight with this software, and that is what happened with the Lion Air," said Garneau.

"The result there is that the airplane tends to oscillate in this conflict between the software and the pilot," he said, making a wave motion with his hand, "and that’s what had some similarities on the Ethiopian flight."

The minister stressed several times it was "not conclusive" evidence, but simply "exceeds a certain threshold in our minds" — enough to ground the planes.

The software automatically controlling the plane's nose is called the Maneuvering Characteristics Augmentation System. It was reportedly designed to be a safety feature, to compensate for stalling that was occurring due to how the engines were fitted to the Boeing 737 Max wings.

On Tuesday, the Dallas Morning News reported that several months before the Ethiopian Airlines crash, pilots had "repeatedly voiced safety concerns" about the Max 8 to U.S. authorities. One captain called the flight manual "inadequate and almost criminally insufficient."

Garneau said Canadian pilots had not made similar complaints about control issues. He said pilots have been given additional training and flight procedures on what they have to do if a similar situation occured.

"Our airlines have told us, and our pilots and the pilot associations, that that has worked well," he said.

Many of the passengers on Sunday's crash were accomplished environmentalists, like Danielle Moore of Winnipeg, who were headed to an assembly of the United Nations Environment Programme in Nairobi.

Others were academics or humanitarians like Pius Adesanmi, a professor who worked at the Institute of African Studies at Carleton University in Ottawa.

Tributes have poured in about those and other Canadians on board: a mother and daughter from Edmonton, for example, and a Calgary city accountant who leaves behind three children.

"On behalf of all Canadians, Sophie and I offer our heartfelt condolences to those who have lost family, friends, and loved ones as a result of this tragedy," Prime Minister Justin Trudeau said Sunday.

Safety first, union says, after suggesting 'not to panic'

However, the component's health and safety committee had originally sent an internal bulletin to members on March 11 that appeared to downplay safety concerns.

"It’s normal that the media have seized upon yesterday’s tragedy involving Ethiopian Airways, since the 737 Max is a new aircraft model and was recently involved in another air accident," the committee wrote.

"We suggest not to panic."

The component added at the time that it had an interest in following up on necessary steps being taken and directives issued by authorities or Boeing "when an investigation concludes."

CUPE spokesman Philippe Gagnon told National Observer on March 12 that the component would not be commenting on internal communications.

On Tuesday, the component issued a fresh statement, asking Air Canada “to put the safety of passengers and crew first" and suggesting flight attendants have "safety concerns."

"They don’t want to be forced to fly on Boeing 737 Max 8 airplanes,” it said, calling on the company to allow crew members to be reassigned.

Lesosky later sent out a message clarifying that Monday’s bulletin wasn’t meant to “trivialize concerns” but to provide background information and inform members of their rights.

Air Canada issued a statement Wednesday saying it will "comply immediately" with the safety notice closing Canadian airspace to Boeing 737 Max airplanes until further notice, and that it fully supports the government's decision.

"Air Canada's cancellation and rebooking policies are in place with full fee waiver for affected customers," the airline said.

"We are working to rebook impacted customers as soon as possible but given the magnitude of our 737 Max operations, which on average carry 9,000 to 12,000 customers per day, customers can expect delays in rebooking and in reaching Air Canada call centres and we appreciate our customers' patience."

The 4,000 pilots of the Air Canada Pilots Association said after Garneau's statement that they supported the minister's decision to be "proactive" and "take steps, consistent with other jurisdictions, to help ensure the safety of the Canadian travelling public."

Trudeau released a statement late Wednesday saying he had spoken with Ethiopian Prime Minister Abiy Ahmed and offered his condolences for the dead Ethiopian crew members and citizens, and Abiy had offered his in return for Canadian dead.

They also discussed Ethiopian refugee legislation, said Trudeau, as well as an upcoming women's rights conference in Vancouver and the detention of Canadians in China, "and the importance of the rule of law."

Editor's note: This story was updated several times on March 13, 2019, most recently at 5:45 p.m. Eastern time to include additional information and quotes from Garneau, Air Canada, the pilots association and the flight attendants union.

Was I hallucinating last

Was I hallucinating last night, or did the CBC coverage of Boeing's current business model include the fact that they churn out 80 of these jumbo jets a day????

Once again, we are obsessing over the trivial details.......and carefully avoiding the deep reality this tragedy is exposing to world scrutiny. Bigger and cheaper....more industrial 'artificial intelligence' (news flash: that's what those pilot bypass softwares are examples of), more money in the pockets of fewer and fewer climate criminals....and the deep themes of all this industrial 'growth' escape everyone........apparently.

But if anyone thinks we can lower our emissions substantially while increasing cheap air travel exponentially.........he or she should invest in one of those artificial 'green' cities Asian real estate speculators are building on their coastlines....using foreign temporary workers from poor villages, and truck loads of sand.

The science says we have 10-12 years. This old lady understands, and believes, the science. We Staycation....there's no comparison to the CO2 our hybrid produces going to the fishing holes of our home province, and the CO2 those bereaved relatives expended flying to the crash site to weep and wail for international cameras. I guess climate catastrophe exists in a different bubble....but not one we're about to train our media cameras on for very long.

Inconvenient Truths?? Time to air a few of them, time to consider grounding more than a few defective jets. Disaster capitalism seems to have spawned disaster journalism....both feed on, and encourage, further destruction. Neither want the truth, or the whole story, to enter public discourse.

Prime Minister Justin Trudeau's "and the importance of the rule of law" ring hollow when we consider his various responses too the SNC Lavin charges.