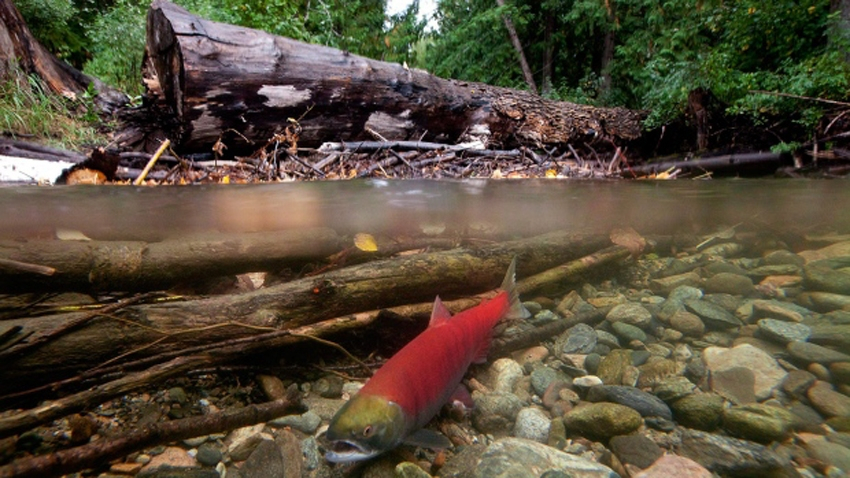 As Fisheries and Oceans Canada (DFO) announced new federal action to bring back struggling Atlantic salmon on Canada's East Coast, a panel of DFO scientists on Canada's West Coast said the outlook for Pacific salmon has declined from previous years.

Exceptionally warm conditions partnered with extreme climate events like El Niño have compromised the salmon diet, they explained, by bringing smaller, less nutritious plankton into B.C. waters, along with migratory predators like shark and mackerel that feed on salmon young and old. These events have also resulted in lower river flows and higher water temperatures that affect salmon migration, survival, and spawning.

"Salmon have very complex life cycles," Ian Perry, a research scientist with DFO's Ocean Sciences Division, told reporters. "The ocean conditions that are important are not just last year's conditions, but in some cases, the ocean conditions three or four years ago. Over the past few years, we've had some very different and unusual conditions in the ocean."

Temperature anomalies are expected to continue, they said, bringing along with them salmon-attacking pathogens that thrive in warmer water.

While none of the panel was quite ready to use the words 'climate change' in relation to diminishing salmon stocks, it noted that between 2014 and 2015, the eastern subarctic Pacific experienced the warmest winter water temperatures ever observed. The scientists are particularly concerned about populations in the Fraser River, where the earliest peak freshwater flooding since 1912 was recently observed near Hope, B.C.

Many B.C. salmon hotspots will be closed to commercial fishing this year, said the panel, and in rare cases, only local First Nations fishing will be permitted.

Their concern comes on the heels of a federal commitment to boost Atlantic salmon populations by advancing 61 recommendations in the Special Report on Wild Atlantic Salmon in Eastern Canada submitted by the DFO Minister's Advisory Committee on Atlantic Salmon in July 2015. The initiative is supported by nearly $200 million in the federal budget allocated to ocean and freshwater science, a portion of which will be spent on hiring scientists and promoting partnerships for the long-term recovery of Atlantic salmon stock.

Asked if a similar announcement may soon come for Pacific salmon, DFO regional communications director Karen Calla responded: “Minister LeBlanc is very interested in responding to the Cohen recommendations as part of his mandate and he does plan to speak publicly on this matter in the near future. I can’t provide any further detail than that.”

The Cohen Commission investigated the cause of steadily declining salmon stocks in B.C.'s Fraser River, and in 2012, issued its complete report. Last year, Prime Minister Justin Trudeau promised the public he would act on the recommendations in the report, including: funding and implementation of the 2005 Wild Salmon Policy and 1986 Habitat Policy, probing deeper into B.C. salmon aquaculture, and imposing independent catch validation measures, stable funding for catch-monitoring programs, and penalties for non-compliance.

Chief Bob Chamberlain of the Union of BC Indian Chiefs (UBCIC), who observed the press conference on Monday morning, said the "principles" of the Cohen report are what's going to save B.C. salmon, but first, DFO needs to talk about climate change. The Cohen report — and in particular the 2005 Wild Salmon Policy — must now be examined through the lens of global warming, he explained, and expanded upon in collaboration with First Nations.

"What I’m not seeing enough of is the preservation of wild salmon and how we develop systems to ensure we understand what is happening," he told National Observer. “Have a look at the dependence that First Nations have on traditional food sources. We can’t have one department approaching the solution when it is going to take the cohesive work of a number of provincial departments and federal ministries."

Chamberlain has lobbied provincial and federal governments for years to get their act together when it comes to Pacific salmon stocks, not only as UBCIC vice-president, but as the chairman of the First Nations Wild Salmon Alliance and Chief of the coastal Kwicksutaineuk Ah-kwa-mish First Nation as well. He is particularly concerned with the recent detection of a kind of salmon heart disease in B.C. fish stocks, and the federal government's involvement in a court case that could make it legal for companies to transfer diseased farmed fish into open-net pens near migrating wild salmon.

DFO backed away from that case in May 2016, securing a five-month adjournment to review to analyze "new information" on disease's presence in Canada, its spokesperson told National Observer on Monday. But it wasn't good enough for Chamberlain, who called for "fundamental changes" in the government's approach to protecting wild salmon.

"I think now more than ever, the DFO and Minister LeBlanc need to demonstrate true leadership for the Liberal government in fulfilling their obligations and commitments to Canadians," he said.

“It could develop interval sampling, tagging, and mapping, then we could begin to develop some really good data for management both in terms of addressing stressors, and management of the salmon in general... Is DFO committed to wild salmon in British Columbia? If so, then we need to expand both of these programs coast-wide for the benefit of all wild salmon in B.C."

Scientists on the panel would not comment on how pipeline development, dirty mining, tanker traffic or other factors beyond their "direct control" might impede their efforts to restore wild salmon off the B.C. coast.