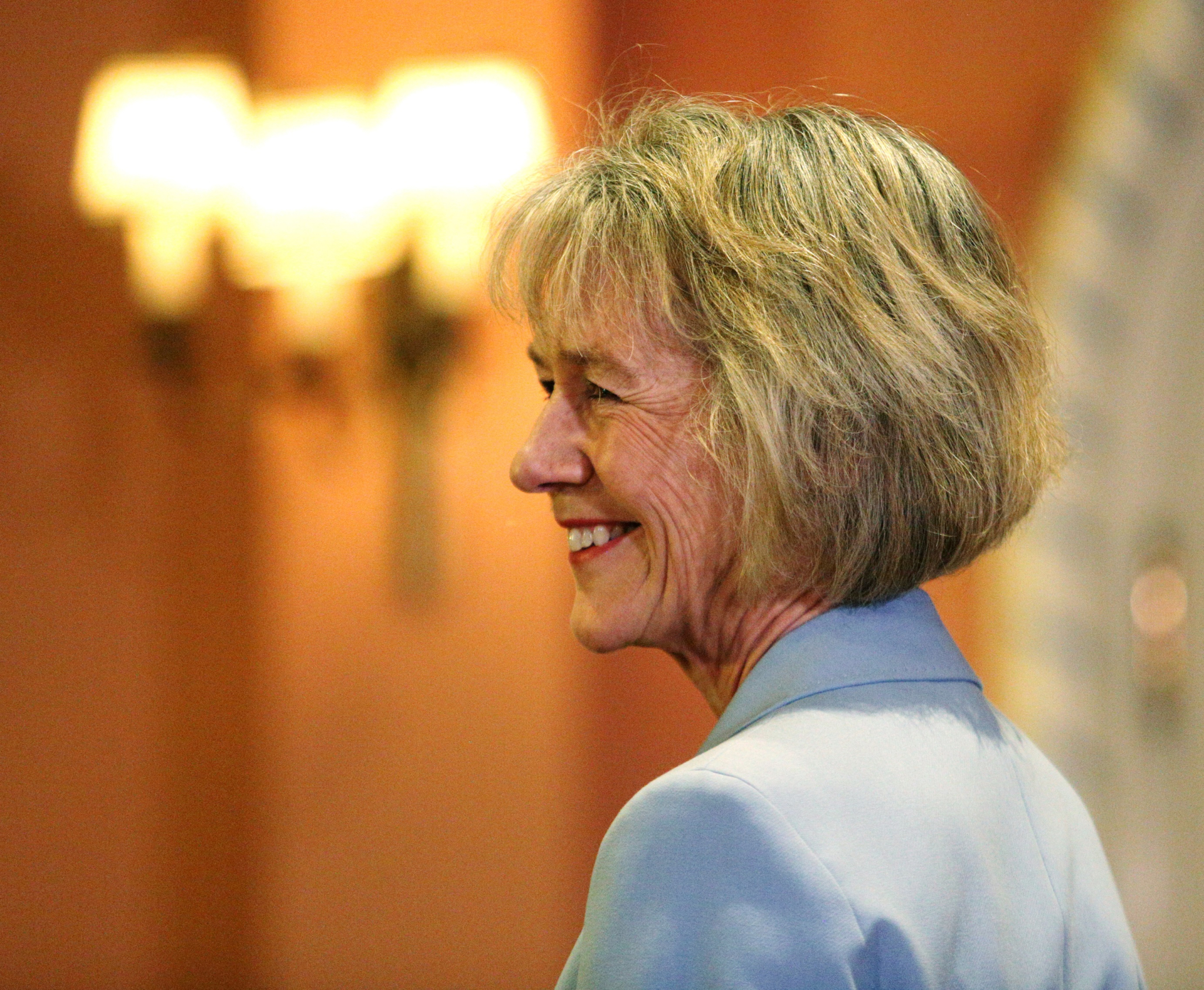 Treasury Board President Joyce Murray is sworn in at Rideau Hall in Ottawa on March 18, 2019. Photo by Andrew Meade
Previous story
Next story

Prime Minister Justin Trudeau has named Joyce Murray to be his next Treasury Board president.

Trudeau promoted Murray at a minor cabinet shuffle on Monday at Rideau Hall in Ottawa, to fill the vacancy left by Jane Philpott, who resigned on March 4 over the prime minister's handling of the SNC-Lavalin issue.

Murray, the MP for Vancouver Quadra, is a former Liberal leadership contender, placing second to Trudeau in the party's 2013 leadership race.

She is also a former British Columbia minister, representing water, land and air protection as well as minister of management services.

In the Trudeau government, she has been parliamentary secretary to the president of the Treasury Board. Her new portfolio also includes minister of digital government.

Murray has been a leader in the government's initiative to green its own operations. She has advocated that, as Canada's largest employer, buyer and landlord, the federal government can set a strong example.

She helped create a framework to cut government's carbon pollution 80 per cent from 2005 levels by 2050, as well as ensure new buildings are net zero-carbon ready by 2022 and commit to clean energy by 2025 for public services-managed buildings.

Her work also helped lead to the creation of a new Centre for Greening Government within the Treasury Board Secretariat.

In 2016, while sitting as a Liberal MP, Murray publicly opposed the Trudeau government's decision to approve the Trans Mountain oil pipeline and expansion project from Alberta to the west coast.

She wrote a paper that year outlining key concerns, and distributed it to caucus. When cabinet approved the project, she released a statement calling it "very disappointing," and vowing that "no one project will diminish my commitment to reducing national greenhouse gas emissions."

In 2018, she said she had chosen to respect cabinet's right to approve the project. She also described how she saw the national interest being served through federal support for the pipeline, as this support was key to getting Alberta to sign on to the national framework to cut carbon pollution and fight climate change.

Oil-rich Alberta produces by far the highest carbon pollution out of all Canadian provinces and territories, so its co-operation was essential, she reasoned.

On Monday, Murray reiterated that she understood the government had bought the Trans Mountain pipeline out of a concern for the national interest and that support for the pipeline had helped achieve a national climate plan.

However in August 2018, after the federal court of appeal quashed the government's approval of the pipeline, Alberta Premier Rachel Notley said her government was pulling out of the national climate agreement until the project was back on track.

Third Treasury Board president since January

This is the third time since January that the position of Treasury Board president has changed hands. That month, Scott Brison, who had held the job since 2015, announced he was stepping down.

This triggered a shuffle on Jan. 14, which resulted in Philpott moving to the Treasury Board and Jody Wilson-Raybould being moved from her position as justice minister and attorney general, over to veterans affairs.

A few weeks after that early January shuffle, a Feb. 7 report in the Globe and Mail threw Trudeau's government into a crisis over allegations Wilson-Raybould had been inappropriately pressured to intervene in the criminal prosecution of Montreal engineering giant SNC-Lavalin.

Wilson-Raybould resigned on Feb. 12, less than a week after the report had surfaced. Trudeau's principal secretary, Gerald Butts, also resigned on Feb. 18, saying he had done nothing wrong, but wanted to be free to defend himself.

Canada's top civil servant, Clerk of the Privy Council Michael Wernick, disputed the news report in front of the House of Commons justice committee on Feb. 21, saying it included errors and speculation.

But Wilson-Raybould's own testimony to the justice committee a week later on Feb. 27 rattled political Ottawa. She described in detail a series of meetings where she experienced pressure from Trudeau, his top aides as well as Wernick. These included conversations where she alleged members of Trudeau's office told her office that the Liberals might not be re-elected in the 2019 election if she failed to intervene in the criminal prosecution.

On March 1, Trudeau named Lawrence MacAulay to replace Wilson-Raybould at veterans affairs, but several days later, Philpott resigned, saying she had lost confidence in how the government had handled the issue..

Wilson-Raybould and Philpott both still sit as Liberal MPs.

Wernick went back to the justice committee on March 6 to deny he acted in a partisan manner during his previous comments. He also presented new information on the government's "public interest consideration" in play with SNC-Lavalin.

The day after, Trudeau held a press conference, refusing to acknowledge any inappropriate pressure, but accepting blame for being blind to what he called an “erosion of trust” between himself and Wilson-Raybould.

Trudeau maintains the government was only looking out for the 9,000 Canadians employed by SNC-Lavalin when he asked Wilson-Raybould to take another look at offering a deferred prosecution agreement to the company, allowing it to avoid a criminal trial.

However it is not clear whether 9,000 jobs are actually in danger if the firm was hit with a criminal conviction. Butts was unable to cite any evidence during his own testimony to the justice committee.

Editor's note: This article was updated at 11:56 a.m. ET on March 18, 2019 with additional background information.

This should shore up Liberal

This should shore up Liberal support in BC. Four more years. Justin is making Canada great again.