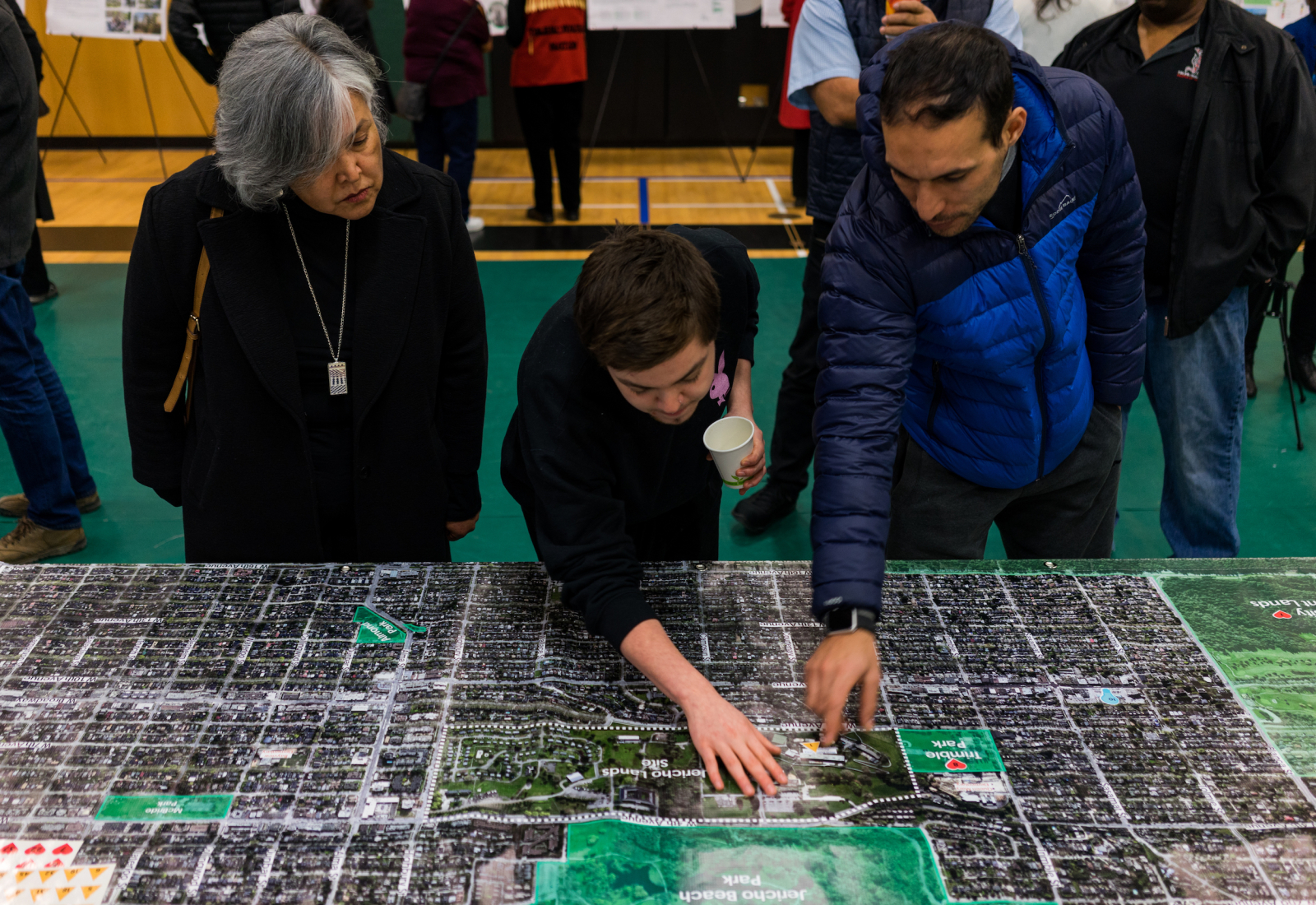 Community members comment on a giant aerial map of the Jericho Lands and the community around them, during the launch of consultations on the project on March 2, 2019 in Vancouver. File photo by Michael Ruffolo
Previous story
Next story

Canada’s federal government plans to spend $4.5 billion over five years to improve the living conditions of Indigenous communities and advance self-determination and self-governance, as Justin Trudeau’s Liberal government seeks to renew its claim as an honest broker and trusted partner in reconciliation efforts.

That includes proposed funding of $938 million in the 2019-20 fiscal year (and $1.4 billion over seven years) to forgive all outstanding comprehensive claim negotiation loans and to reimburse Indigenous governments that have already repaid these loans, it said in its 2019 budget released on Tuesday.

Under a previous federal government program, Ottawa would loan money to Indigenous communities so they could afford to pursue land rights claims through a lengthy legal process.

“Forgiving and reimbursing loans will allow more than 200 Indigenous communities to reinvest in their priorities like governance, infrastructure and economic development,” the budget said.

Once a successful land claim is completed, First Nations, Metis and Inuit communities are in a stronger position to negotiate terms on natural resource development.

While acknowledging there is more work to do on self-determination, the government said that it had settled 68 specific claims since November 2015, a more than 40 per cent increase over the previous three and a half years, when former prime minister Stephen Harper was leading a Conservative federal government.

“Where it took Canada more than 40 years to negotiate 40 Indigenous land and rights agreements prior to 2015, a new approach is delivering positive results for Indigenous communities,” the budget document said, adding that more than 75 discussions are underway and 29 preliminary agreements have been signed.

The budget also provides $12.8 million for Natural Resources Canada to conduct consultations with Indigenous communities in the 2019-20 fiscal year.

Most of that will go toward talks on the Trans Mountain expansion project, which has faced stiff resistance from some of the First Nations on whose traditional territory the pipeline would run.

“Government officials, and representatives of Trans Mountain Corporation, have met with nearly all of the potentially impacted Indigenous communities along the route,” the document said.

“Indigenous people are telling the government that they want to protect sensitive sites, improve emergency response and safety capacity in their communities, protect the iconic southern resident killer whales and their habitat, mitigate the cumulative impacts of development on land and water, and ensure their communities have the opportunity to benefit economically from the project,” it said.

The government said it has provided federal consultation teams with a strong mandate to accommodate these concerns, and will make a decision on the project once satisfied it has adequately fulfilled its duty to consult.

Finance Minister Bill Morneau said the government will keep pushing to get Canadian natural resources to international markets, which can only be achieved if consultations fully consider the input of all stakeholders.

“We are going to do this in the right way, it is on track and I will continue to stay on top of that file,” he told reporters on Tuesday.

The budget also allocates funds to address specific calls to actions from the Truth and Reconciliation Commission’s report, including $126.5 million in 2020–21 to establish a National Council for Reconciliation and endow it with initial operating capital.

It will also spend $9.1 million over three years to help build an Indigenous Legal Lodge at the University of Victoria, British Columbia, which is expected to “serve as a foundation for debate, learning, public education and partnership on the revitalization of Indigenous laws.”

Rural and remote Indigenous communities would also be among the primary beneficiaries of a government promise to deliver high-speed Internet (at least 50 Mbps download speeds and 10 Mbps upload) to everyone in Canada by 2030.

The government is earmarking up to $1.7 billion over 13 years to establish a new national high-speed internet program, the Universal Broadband Fund, to extend Internet connectivity to underserved communities and in some extreme cases even cover the “last mile” to individual homes and businesses.

This fund will also be used to secure bandwidth on low-orbiting, low-latency satellites, and will coordinate with a recently-launched five-year $750 million Broadband Fund from the Canadian Radio-television and Telecommunications Commission (CRTC).

The government estimates that 10 percent of the population — or some 1.5 million households - will still not have high-speed Internet by 2021.

“Finance Minister Bill Morneau said the government will keep pushing to get Canadian natural resources to international markets, which can only be achieved if consultations fully consider the input of all stakeholders.”
Therein lies the motive behind the budget allocation to Indigenous communities. NOT a sincere desire to make reparations for years of displacement, broken treaties, stolen children, poisoned waters, and theft of land and resources.
They want to keep doing this, but will pay more for consent.