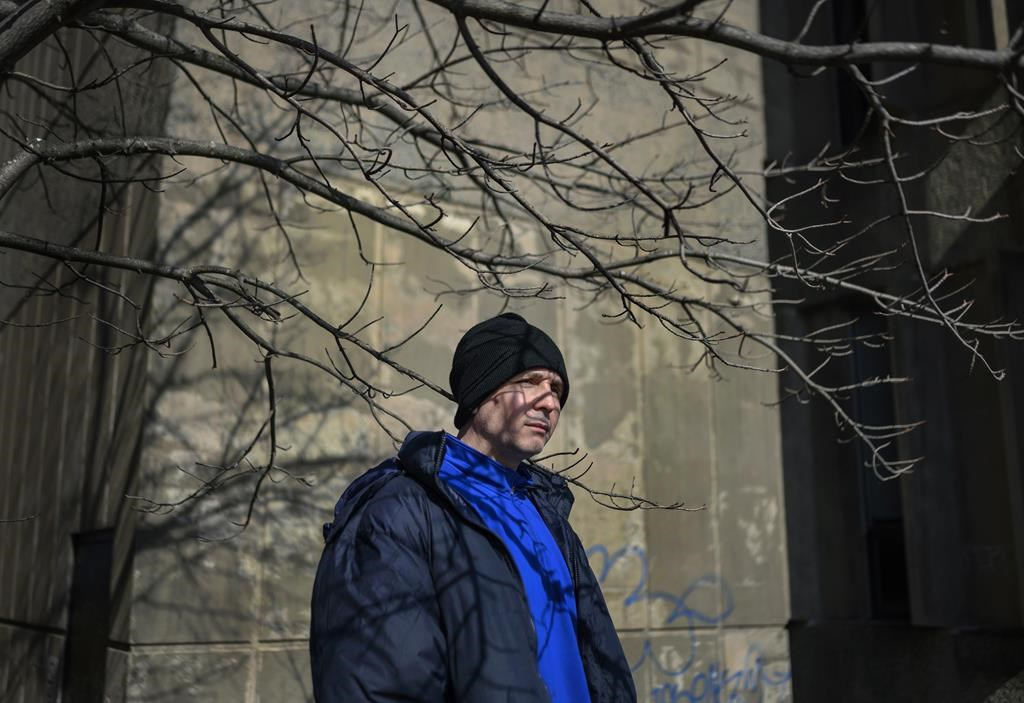 Rob MacDonald poses outside of a clinic where he is receiving addiction treatment in Halifax on Friday, March 15, 2019. Photo by The Canadian Press/Darren Calabrese
Previous story
Next story

Memories of vomiting, diarrhea and unrelenting stomach pain as he withdrew from opioids in prison had Rob MacDonald repeatedly asking for addiction treatment before he left a maximum-security facility but despite dozens of formal complaints, he says he didn't get any help.

"I was thinking, 'Wow, I can't believe I'm going out onto the street with this addiction,'" MacDonald said recently a week after being released on supervision from the Atlantic Institution in Renous, N.B., his fourth facility in over a decade behind bars.

MacDonald, 41, said he feared his 15-year opioid addiction would cause him to return to crime while using illicit drugs on the outside so he tried desperately to get treatment from the federal prison service.

"I put 150 requests in, probably 70 complaints, for a 15-month period, trying to tell them, 'Put me on it. I need it before I get out. I want to get help, I don't want to go back into the community in a high-risk situation, I don't want to re-offend,'" he said from Halifax, where he lives in a halfway house.

When he was incarcerated at British Columbia's Kent Institution between 2017 and 2019 for drug-related offences and robbery, MacDonald said debilitating withdrawal symptoms had him seeking potentially deadly fentanyl-laced drugs that were smuggled into the prison.

The Correctional Service linked MacDonald to a clinic in Halifax upon his release nearly two weeks ago and he is now prescribed the opioid substitute Suboxone. But he said he should have received the medication in prison as part of the agency's treatment program, which also includes methadone, so he could focus on finding a construction job to get his life back on track.

Ivan Zinger, Canada's ombudsman for offenders, said the Correctional Service has failed to provide adequate addiction treatment, programs and staff at a time when more drugs are contaminated with fentanyl.

"I think when you're dealing with a large inmate population that has such a long history of substance abuse you should be providing an awful lot more treatment and programming in addition to opioid substitution therapy," said Zinger, who called for the reallocation of funding to provide those services.

"It's unclear to me why the budget has remained the same and decreased in the past when clearly the number of incidents is increasing," he said of overdoses that caused 41 deaths between 2010 and 2018.

Zinger said programs such as counselling are provided just before offenders are released instead of throughout their incarceration.

"That's a problem when you have a highly addicted inmate population that has a lot of time on their hands and are in sometimes difficult conditions of confinement. They will find ways to bring in drugs."

The Correctional Service said in a statement that 66 per cent more prisoners have accessed treatment in the last two years, but a jump of 115 per cent has been recorded in the Pacific region, where the opioid crisis is most acute.

It did not respond to requests for information on whether its budget will be increased to meet the demand for more treatment.

Kent Elson, a lawyer for an offender at Joyceville Institution in Kingston, Ont., said the Correctional Service did not accommodate his client's disability of addiction so he filed a complaint with the Canadian Human Rights Commission last November.

Elson said his 50-year-old client, who is serving a four-year sentence, had been on methadone but alleges the medication was withheld without explanation for five days when he was transferred from another facility in November 2017.

"He needed medical help and he got forced, cold-turkey withdrawal in a feces-smeared segregation cell and cruel mistreatment from guards. And it was so unbearable that he tried to kill himself three times," Elson said from Toronto.

While Correctional Service guidelines state a doctor is required to interview offenders before they are involuntarily tapered or cut off from methadone or Suboxone, Elson said his client was not seen by a physician.

"This whole experience was incredibly traumatic and he ended up with PTSD," he said.

"The impact on him was terrible but everybody wins if prisoners get the right treatment. Suffering from PTSD is not going to make them easier to integrate back into society."

Nicole Kief, an advocate for the group, said about 100 inmates reported three main concerns: long wait lists for treatment, being cut off Suboxone after false accusations of diverting it, and not receiving addiction counselling.

"Of the people that I've talked to there has been a real sense of urgency, with people calling me and saying, 'I'm worried about dying,'" she said.

After a long career in CSC, I

After a long career in CSC, I know enough to know there is much more to this story than is told above, and I know that CSC is in fact limited by law in its ability to engage in a public discourse about any one person. Also I think that limitation is a good one for a lot of reasons I will not expand upon here. Having said all of that, it has never been possible to describe the CSC response to substance addiction as a coherent, science based approach available to all inmates at all times. Managing addiction is one of many competing objectives in a continuously changing, complex environment of competing priorities. I do think it can be done better, and articles such as these help to engage the public in an important discussion.