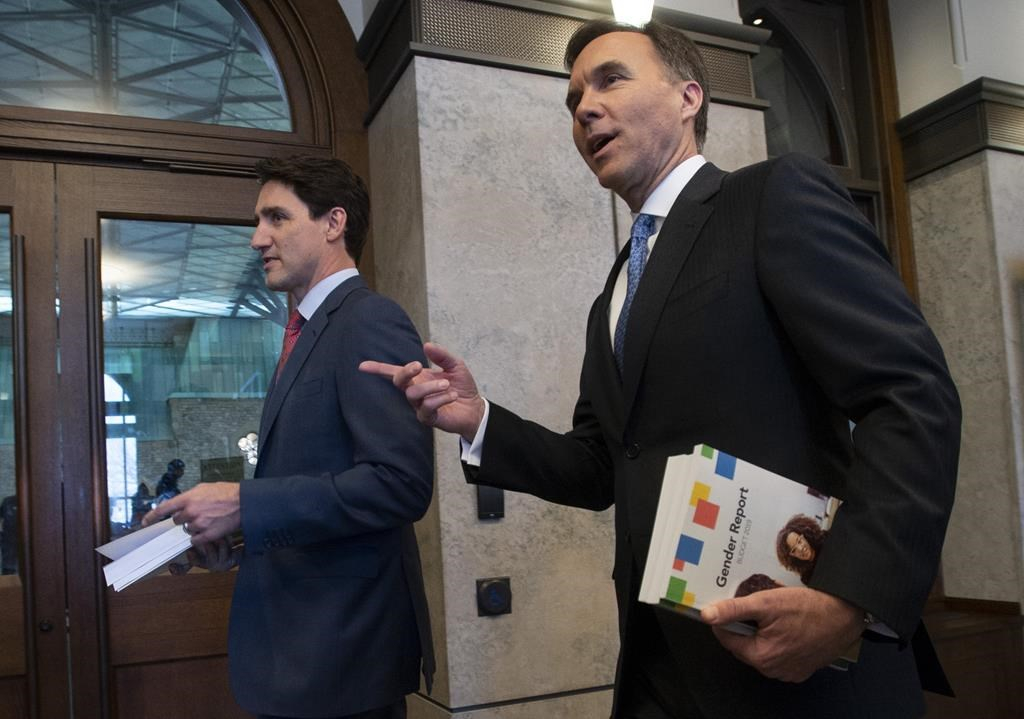 Prime Minister Justin Trudeau and Finance Minister Bill Morneau speak as they walk to the House of Commons in Ottawa, on Tuesday, March 19, 2019. Photo by The Canadian Press/Sean Kilpatrick
Previous story
Next story

Canadians could soon be putting $250 a year in federal tax credits toward better skills, while getting federal help to pay the bills.

One of the showpieces in Tuesday's federal Liberal budget, part of more than $1.7 billion in planned new spending over five years, aims to help workers prepare for tectonic digital shifts in Canada's labour market — although it appears to fall short of what experts have told the government would be needed to help workers chart new career paths.

The Liberal proposal would provide a $250 refundable tax credit, accumulating over time, to allow workers to offset the costs of learning new job skills. The plan, to cost $710 million over the next five years, would be available to Canadian workers earning between $10,000 and about $150,000 a year.

The budget document says the credit is expected to launch in late 2020 — a year after this fall's federal election — and will apply against the cost of programs at eligible universities, colleges and training institutions.

"We will be able to make an enormous difference for people in terms of the worry that they have that they have the skills for tomorrow," Finance Minister Bill Morneau told a news conference Tuesday prior to the tabling of the budget.

The government also plans to create a new employment-insurance benefit for those who take time off from work to attend a training program, up to a maximum of 55 per cent of earnings. That program carries a price tag of $1.04 billion over five years.

Only those who qualify for employment insurance would be eligible for the four weeks of leave, redeemable within a four-year period. It would also require the federal government to negotiate labour-law changes with provinces — whose jurisdictions cover approximately 90 per cent of Canadian workers.

The measure means workers have a right to training while employed, not just after losing jobs, but several details still need to be worked out, said Hassan Yussuff, president of the Canadian Labour Congress.

"The federal government is going to have to really listen to what people are going to have to tell them about how they envision impediments in terms of a good program that could prevent them from even getting access to it," said Yussuff.

In particular, he said, it could be a hard sell to convince those living paycheque to paycheque of the importance of paying up front for future job training. Canadian Centre for Policy Alternatives senior researcher Katherine Scott said employers were "missing in action" in the plan, suggesting they need to pay more.

There is a chance the benefit could result in higher EI premiums — the Liberals are promising a break to some small businesses to offset the "upward pressure" on premiums as a result — but the actual costs won't be known until EI rates are set later this year.

Dan Kelly, president of the Canadian Federation of Independent Business, said his group has reservations about the cost of an EI benefit without any guarantee the "employee-centric" training credit will meet the needs of employers. It could also let an employee hold a job with one employer while getting time off to train to join another.

"We think there are a lot of design issues with that and we would much rather see a training credit focused on the needs of the working world rather than what an employee may wish to study," he said.

Since Morneau's first budget three years ago, job creation has outpaced expectations and the unemployment rate has fallen to its lowest level in nearly four decades.

Still, there appears to be a disconnect between the jobs that need to be filled, and the skills of workers looking for employment, which is where the new training benefit could act as an incentive to re-skill, said Mathieu Laberge, an expert with Deloitte.

"We have a very low unemployment rate, we have job vacancies and that all points towards maybe a misalignment between current skills offered and current skills needed," said Laberge, a former policy adviser to Social Development Minister Jean-Yves Duclos. The 2019 budget measure could "at least start something in terms of re-skilling (and) upskilling."

Past Liberal budgets have put billions into job-training programs that are largely the domain of provincial governments, hoping to cut poverty rates and get more people into the labour force. The new spending unveiled Tuesday is part of a group of measures that include lower interest rates for student loans, a revamped youth employment strategy and new parental leave options for student researchers and postdoctoral fellows who receive money from a granting council.

thank you for your coverage

thank you for your coverage of what was in the budget yesterday. Please, however, redirect your orientation from "who gets what" and whether or not the speculative bottom line is more or less than zero. [Economic forces much more powerful than any federal government will determine that].

What I want to read is reporting and analysis of WHAT KIND OF SPENDING is proposed: tax tweaking, new direct service programming [like the EI benefit changes for a new purpose], cash for the losers created by the last round of trade deals], etc.

What democratic purposes does the spending address? Can any items be considered buying votes given that they are tailored to soft Liberals? Is facilitating a consortium of provincial government pharmaceutical interests a new face for federalism? What is the prognosis for 'our country' and the performance evaluation of this minister of finance?

$250, yeah, that will solve the problems of the unemployed during an economic Revolution on the type of jobs available. Largely a waste of money, a plan they know will not work but they hope will achieve its real and only realistic goal, getting votes.