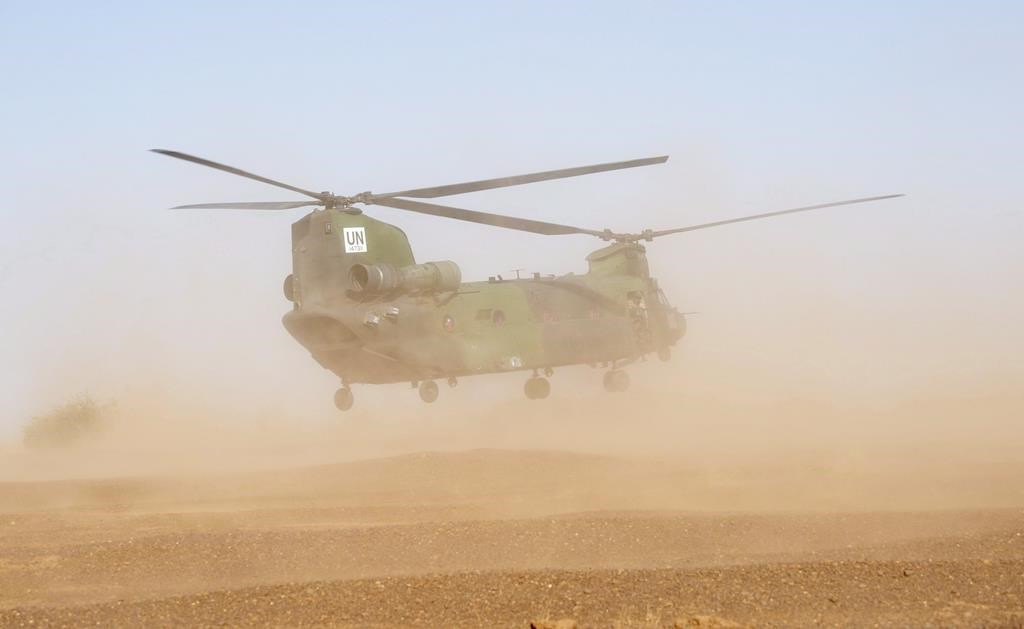 A Canadian Chinook helicopter takes off as it provides logistical support during a demonstration on the United Nations base in Gao, Mali, on Saturday, December 22, 2018. File photo by The Canadian Press/Adrian Wyld
Previous story

Canadian peacekeepers were called upon to evacuate several wounded French soldiers in Mali earlier this month after their patrol was ambushed while hunting for militants along the border with Niger.

The previously unreported incident marks the first time the Canadians have been asked to help non-United Nations forces in Mali, where the French have been conducting counter-insurgency operations since 2014.

Canada has eight helicopters and 250 military personnel in Mali, where they have been providing emergency medical evacuations and transporting troops and equipment across a large swath of the remote African country.

The Canadians have conducted seven other medical evacuations since August, all of which involved injured UN troops and workers.

In an interview with The Canadian Press, the commander of Canada's task force in Mali said the UN and France have agreed to help each other in extreme circumstances and that his peacekeepers did their jobs by helping save lives.

"I wouldn't want people to presume or assume that we're supporting counter-terrorism efforts," said Col. Travis Morehen. "But it's really at this point about saving allied lives."

News of the French evacuation comes as the federal government is contemplating a formal UN request to extend its peacekeeping mission in Mali, which is currently set to end at the end of July.

France has about 3,000 heavily armed soldiers in Mali and the surrounding region hunting militants linked to al-Qaida, the Islamic State and other extremist groups through what is known as Operation Barkhane.

While Operation Barkhane has been credited with keeping the numerous Islamic extremist groups in Mali off balance, it has also been accused in some corners of contributing to instability in the region.

According to media reports, a French patrol was operating near Mali's border with Niger on March 10 when they were ambushed by a vehicle packed with explosives and a group of militants on motorcycles.

The Canadians first learned about the attack when a French officer at the Operation Barkhane camp in Gao called while it was still happening and indicated an emergency medical evacuation might be required, said Morehen.

The French counter-terror mission operates largely independently from the UN peacekeeping mission in Mali, but Morehen says there is a good working relationship between the two.

That includes the French providing air-traffic control services to the UN around Gao, the northern Malian city that is home to several military bases, including one belonging to Barkhane and another where the Canadians are located.

The French also boast a more capable hospital than the UN, Morehen said, which is why the Canadians often end up bringing any wounded peacekeepers that they pick up in the field to the Barkhane camp.

"So our pilots go over there and make sure that we have our flying procedures correct and we have a technical arrangement with them as well for medical support," Morehen said.

"There's lots of sharing between us, which is all blessed by our governments."

Three Canadian helicopters were quickly deployed with approval from the UN mission commander in Bamako, Morehen said, and arrived at the scene about two hours later, at which point the fighting was over.

Because of the distance, the two smaller Griffon escorts were redirected to a nearby town to refuel while the larger Chinook, which is configured like a flying hospital, continued back to Gao alone with the injured French soldiers.

"It does increase the risk," he said, "but we balanced it against the need to get those wounded back to medical facilities as soon as possible."

While he agreed that it was "the right thing to do," Walter Dorn, an expert on peacekeeping at the Canadian Forces College in Toronto, said the evacuation nonetheless risked linking the UN and French missions in some minds.

"The risk is that we are associated with Barkhane and we then become subject to more attacks and the line between peacekeepers and counter-insurgency fighters is blurred," Dorn said.

Morehen pushed back against such suggestions, insisting the evacuation was an extremely rare circumstance and that anyone who wants to target the UN — which has suffered dozens of casualties in Mali — will do so no matter what.

"The people that want to do people harm here, they've already got it formulated in their mind," he said. "I don't see how fathomable it is that we would be targeted because we gave a medevac to French forces."