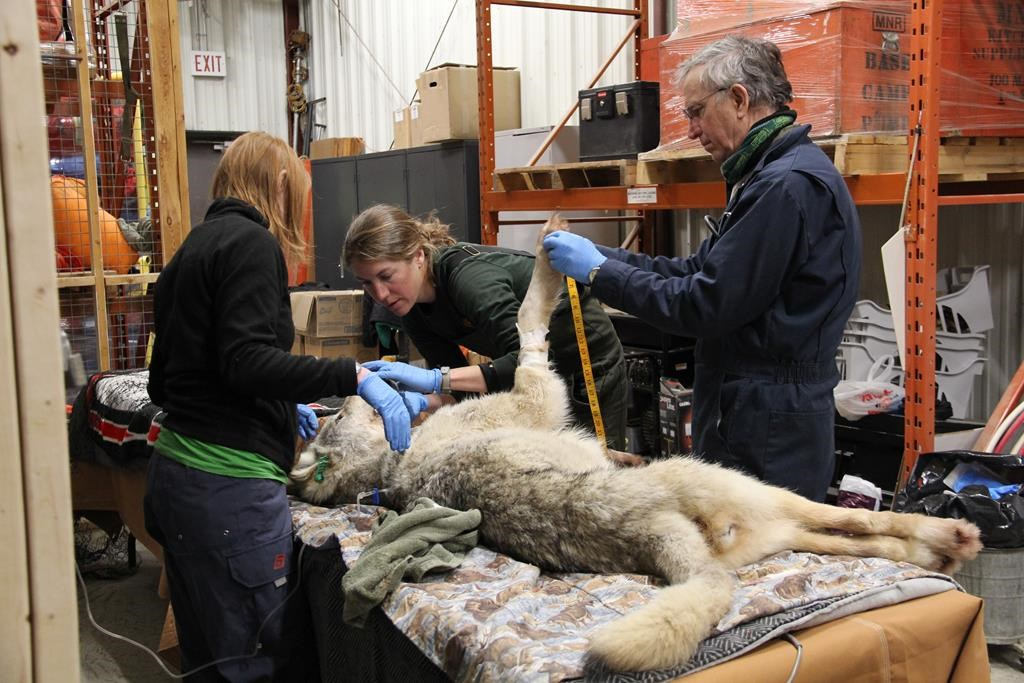 Workers inspect a wolf after capturing it on Michipicoten Island, Ont. in this undated handout photo. Handout photo by Ashley McLaren, Ontario Ministry of Natural Resources and Forestry
Previous story

Six wolves at risk of dying of starvation have successfully been moved off a northern Ontario island to one on the U.S. side of Lake Superior.

A contracted capture crew and Ontario's Ministry of Natural Resources and Forestry performed the operation on Friday and Saturday, taking the wolves from Michipicoten Island to Michigan's Isle Royale. The Canadian-U.S. team also moved over one wolf from Ontario's mainland.

"The Michipicoten wolves were in poor condition," said Isle Royale National Park superintendent Phyllis Green. "It was pretty much their last chance."

The Michipicoten wolves were at risk because the caribou they had preyed on for years had either been killed off or had largely been moved off the island in two separate operations last year.

In those moves, the province with the help of the Michipicoten First Nation, transported a total of 15 caribou off the island. Nine went to the Slate Islands and after pressure from the First Nation, six more were moved to Caribou Island — both in Lake Superior.

That was a last-ditch effort to save a once-thriving caribou herd — a population that numbered at 700 after starting with 8 animals in 1982. It had been a ministry conservation success story.

Things changed, however, when the wolves arrived on the island via an ice bridge formed in the winter of 2014.

By last winter, few caribou remained before they were moved away.

"They basically have outstanding hunting skills, given their demolishment of the caribou herd," Green said of the wolves, adding that she's thrilled to have the new pack in her park. They join two others that were captured from Michipicoten last month.

Isle Royale is currently trying to grow its decimated wolf population that had dwindled to two — a father-daughter-half-sibling inbred pair. The wolves are an important part of the longest-running predator-prey study in the world, which officials hope to continue.

There is an overabundance of moose now on Isle Royale, numbering about 1,500 Green said. That population was long held in check by the wolves.

"The Michipicoten wolves face a lot tougher prey species in the form of a moose, but between their skills and genetics, they are an extremely welcome addition to Isle Royale National Park," Green said.

There are 15 wolves on the U.S. island now: the two native wolves, two Minnesota wolves brought in last fall, eight from Michipicoten and three wolves from Ontario's mainland not far from Michipicoten First Nation.

Last week, two U.S. charities — the National Parks of Lake Superior Foundation and the International Wolf Center — had raised money with the hopes of saving the remaining Michipicoten wolves, Green said. They raised $100,000 that covered the cost of the move, she said.

"This is done, quite frankly, at no cost to the taxpayers," he said, adding that he believes all the remaining wolves have now been moved off the island. "It was always our hope to have the wolves taken off Michipicoten because we were quite justifiably concerned they were going to starve."

But Aaron Bumstead, the director of lands and economic development with Michipicoten First Nation that helped with the previous caribou and wolf moves, criticized the ministry.

"They went behind our backs and took wolves off the mainland rather than focus on Michipicoten," Bumstead said, referencing the earlier move in February where weather challenges meant only two wolves were moved off Michipicoten.

"Then they did it again with another wolf from the mainland this weekend. They've stopped listening to us, it's not a partnership anymore."

The First Nation is happy the wolves were saved, Bumstead said — although they still think there may be a wolf or two left behind — but sad about how the operation unfolded.

They still plan to pressure the government to come up with a plan to return caribou to Michipicoten, which he called "pristine habitat" for the threatened species.

Yakabuski said he hasn't had any long-term discussions about returning caribou to the island.

"We're always open to discussing any issue that would enhance the diversity of our wildlife," he said.