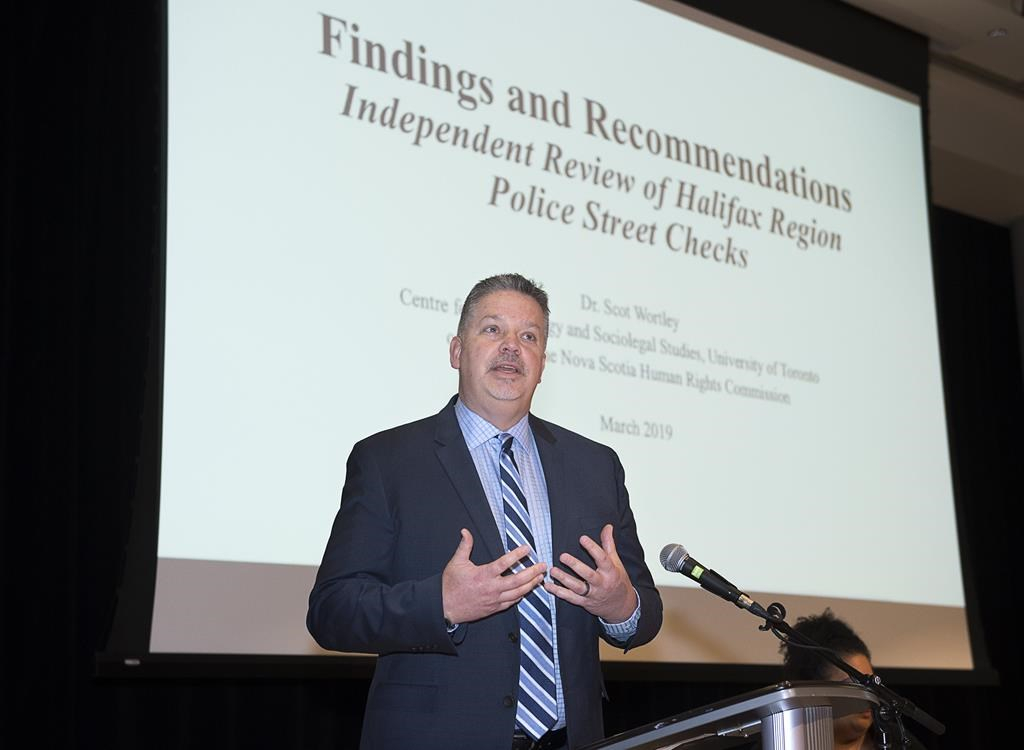 Criminologist Scot Wortley presents his findings on the issue of police street checks in Halifax on Wednesday, March 27, 2019. Photo by The Canadian Press/Andrew Vaughan
Previous story
Next story

Street checks by Halifax-area police have had a "disproportionate and negative" impact on the African Nova Scotia community, according to a new report that found black males were nine times more likely to be stopped by police than the general population.

The report released Wednesday recommended banning or strictly regulating the controversial practice in the province.

"Street checks have contributed to the criminalization of black youth, eroded trust in law enforcement and undermined the perceived legitimacy of the entire criminal justice system," said Scot Wortley, the report's author and a University of Toronto criminology professor.

The report was commissioned by the Nova Scotia Human Rights Commission in 2017 after a United Nations working group raised serious concerns regarding systemic discrimination and racial profiling in police street checks in Nova Scotia.

The 180-page report found street check rates in Halifax were among the highest in Canada, second only to Toronto. Ontario banned police carding in specific situations in 2017 — a controversial practice that is similar to street checks.

Justice Minister Mark Furey pledged he would take action on the issue of police street checks and racial profiling.

"We'll need some time to review the report but I will guarantee the African Nova Scotian community and all Nova Scotians this report will not sit on a shelf," he said. "We will act on this."

Furey stopped short of ordering a moratorium on street checks until action is taken, but said he will direct police across the province to ensure quotas are not placed on the use of street checks and they are not used as a performance measurement tool.

Over the 12 year period, the report found that black people were disproportionately questioned by police.

For example, although African Nova Scotians make up only 3.6 per cent of the population, they were subjected to 19.2 per cent of street checks — making it five times more likely they would be stopped by police.

Wortley said the staggering statistics are just the "tip of the iceberg," noting that the figures do not include all police traffic stops and pedestrian stops.

"Street checks capture only a small fraction of all police stops," he said, suggesting the number of black people being randomly stopped by police in Halifax could be much higher.

In community consultations and surveys, Wortley said black Nova Scotians spoke of being treated rudely or with disrespect by police, and felt intimidated or afraid of police in their community.

The report included personal stories from African Nova Scotians recounting their negative experiences with police, including being stopped, questioned, harassed, bullied and assaulted.

After the report was released at the Halifax Central Library, Trayvone Clayton, a Halifax university student, stood up to describe his first time being stopped by police at the age of 16.

He said he left a party in a white neighbourhood alone to avoid calling attention to himself "because I'm a black youth in a white community."

Still, Clayton said he was stopped by police and when an officer put his hand on his shoulder, he told him not to touch him because he hadn't done anything wrong.

"Then he puts me in a choke hold and slams me to the ground and puts his knee to my head on the cement," he said.

But some officers admitted many street checks are of questionable quality, the result of a performance evaluation system and efforts to "get their numbers up."

However, the report found that a third of recorded street checks involved individuals who had never been charged with a crime.

Robert Wright, a Halifax social worker who speaks for the African Nova Scotian Decade for People of African Descent Coalition, called the racial disparity in the street check data "profound."

He said the issue isn't about a few "bad apples" in police forces, but rather the impact of historical and systemic racism.

"Street checks are illegal, and should be banned," he said. "We cannot begin to talk about the regulation of something that ... is indeed illegal. We do not regulate illegal activity."

Halifax Regional Police Chief Jean-Michel Blais said he would be reading the report more closely over the coming days to determine "where we can make initial changes and where we can make long-term changes."

He's argued in the past that the valid street checks performed by police officers in Halifax differ from the random stops or carding practices that are now restricted in Ontario.

However, Wortley said in his opinion the two practices are not different — "there's just been a rebranding."

He explained that what's changed is the data management system under which street check information is recorded. For example, Toronto police once had an official card that had to be filled out — hence the term carding — which later became known as field information reports and now street checks.

"The experience on the street is being stopped, being questioned, being asked to produce ID, being asked questions about where you're going, what you're doing, being asked in some cases to empty your pockets or to submit to a frisk or consent search," Wortley said.