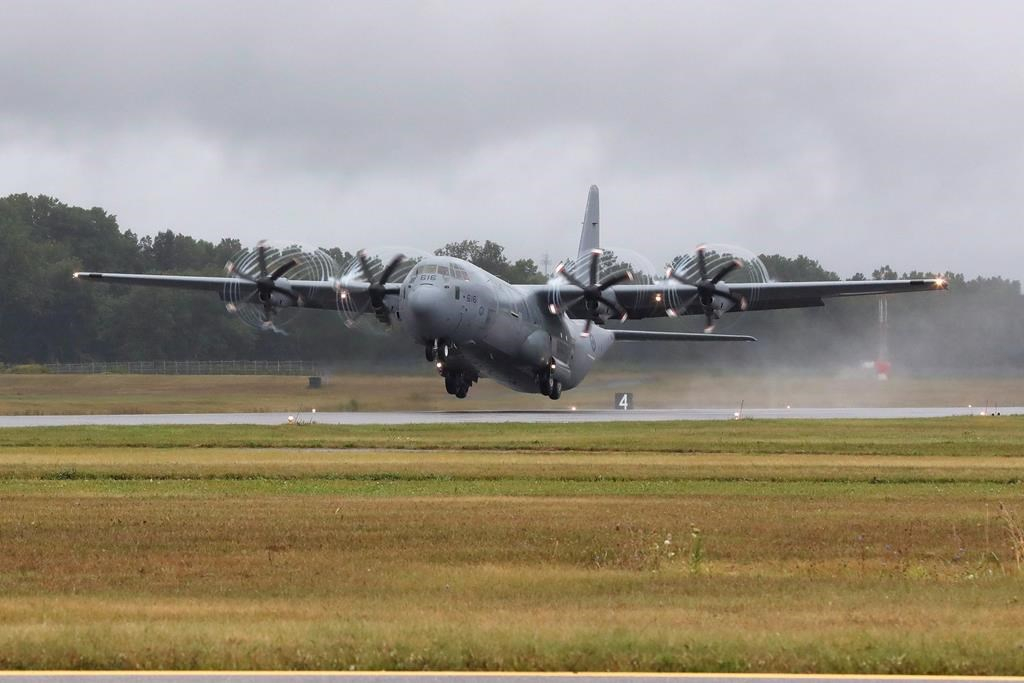 A Canadian Forces Hercules plane takes off from CFB Trenton in Trenton, Ont., on Sunday, Sept. 3, 2017. File photo by The Canadian Press
Previous story
Next story

The United Nations is pushing back against restrictions Canada wants to put on the use of a military transport plane it promised to deploy in Africa.

Prime Minister Justin Trudeau first announced in November 2017 that Canada would send a C-130 Hercules to Uganda as part of a larger package of pledges to the UN.

The idea at the time was for the plane to ferry troops, equipment and supplies from the UN's logistics hub in Entebbe to different peacekeeping missions around the region.

Multiple sources say the offer of the plane came as a surprise to the UN, and the plan has run into numerous snags as Canadian, Ugandan and UN officials wrangle over the details.

One UN official, who spoke on condition of anonymity because of diplomatic sensitivities, says Canada recently provided a list of conditions about where and when the plane can be used.

Those included a stipulation the plane only fly in daylight and only between Entebbe and five locations that, according to the UN official, either don't have any peacekeeping units or are easily accessible by road.

As a result, the UN told Canada the arrangement did not meet its needs.

Defence Minister Harjit Sajjan spokesman Todd Lane would not comment specifically on the concerns raised by the UN, but both sides say they continue to talk about the aircraft.

"We continue to be in discussions with the UN on how we can deliver on this pledge in a way that best fits the UN's current requirements," Lane said in an email.

News of the back-and-forth comes just ahead of a major peacekeeping summit in New York Friday, the first since Canada hosted a similar gathering in Vancouver, where Trudeau pledged the Hercules plane.

It also coincides with the UN pressing Canada to extend its mission in Mali by two-and-a-half months to prevent a gap in lifesaving medical evacuations.

Canada has eight helicopters and 250 peacekeepers in Mali providing medical evacuations to injured UN troops and workers. Operations are due to end on July 31, though Romanian replacements won't arrive until mid-October.

Both episodes speak to the UN's apparent frustration with Canada, said University of Montreal peacekeeping expert Jocelyn Coulon, who served as an adviser to then-foreign affairs minister Stephane Dion.

"What I can't understand from the Canadian government is why it is so complicated to negotiate with the UN," Coulon added in an interview from France.

"Canada seems to be dragging its feet every time the UN is asking something, and it doesn't seem to be complicated with NATO when you have to provide troops and material for Latvia or even to renew our commitment in Ukraine."

The Trudeau government announced last week that it was extending Canada's military missions in Ukraine and Iraq by several years, but has yet to respond to the UN's request on Mali.

The problem is that there's no champion for peacekeeping at the top levels of government, said Walter Dorn, a peacekeeping expert at the Canadian Forces College in Toronto.

That extends to Trudeau and Foreign Affairs Minister Chrystia Freeland, who Dorn said are preoccupied with Russia and the U.S., while defence chief Gen. Jonathan Vance has been very particular about where to send troops.

"So it just leads to all these delays."