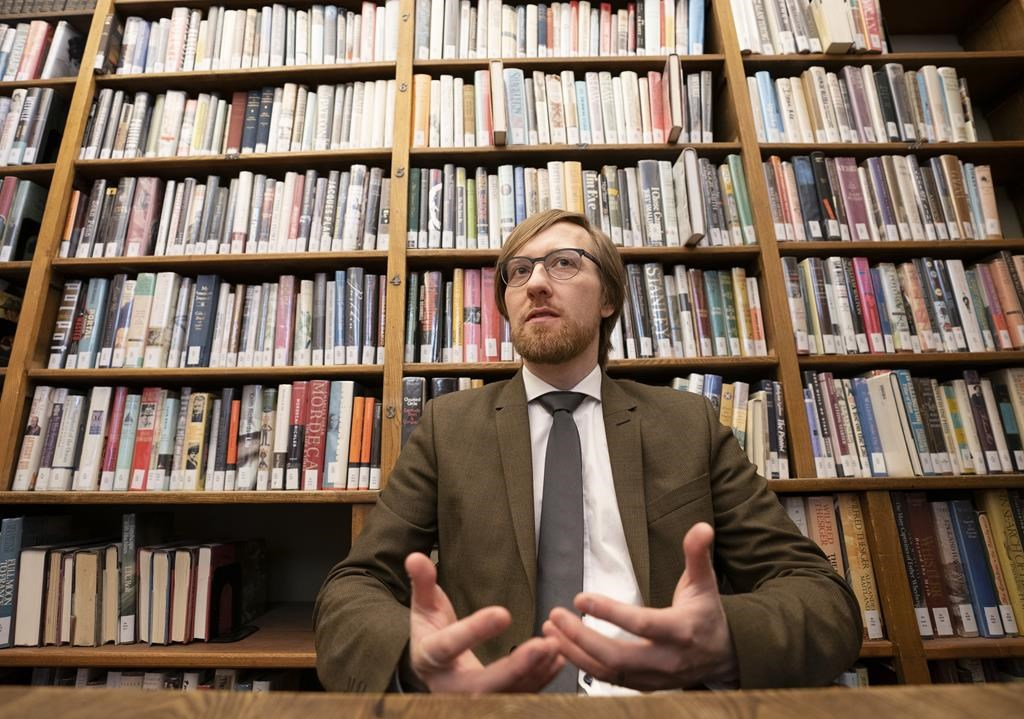 Barry McCullough, executive director of the Morrin Centre in Quebec City, is shown at the centre on Wednesday, on March 20, 2019. Photo by The Canadian Press/Jacques Boissinot
Previous story
Next story

Within the ramparts of Quebec City, a library and cultural centre for the city's English-speaking minority housed in a former jail is run by a soft-spoken spectacled man from rural New Brunswick named Barry McCullough.

About two kilometres away, in an apartment overlooking the Plains of Abraham, Halifax native Shirley Nadeau puts together the English-language Chronicle-Telegraph, which has been published uninterrupted since 1764 and bills itself as the oldest newspaper in North America.

A short drive west of Nadeau's home newsroom, the non-profit organization offering services and advocating for the region's 15,000 English-speakers is managed by Brigitte Wellens, originally from Montreal.

Quebec City's anglophone community — making up about 2 per cent of the capital's metropolitan area — is historic and close-knit. But unlike Montreal, where hundreds of thousands of English-speakers have maintained a critical mass, Quebec City anglophones face a precarious future.

Every five years, between 20 and 25 per cent of the city's anglophone minority leave and are replaced by newcomers, Wellens, executive director of Voice of English-Speaking Quebec, said in a recent interview. Nowhere is this evolution more evident than in the central roles played in the community by transplants like McCullough, Nadeau and Wellens.

McCullough, 37, boasts that he arrived in town for the winter of 2008. "The famous 550-centimetre snowfall winter — it's the barometer of bad winters," he said, after giving a tour recently of the Morrin Centre's detention cells, preserved from the time when the building was a municipal jail between 1812 and 1867.

McCullough describes the English-speaking community as resilient, creative and bilingual. "It's like sink or swim," he said. "If you want to live here, you are committing to learning French." Community members are also highly engaged and connected with one another, he said, citing as an example Nadeau, who volunteers in the library.

When Nadeau, 72, isn't at the library, acting in plays put on by the Quebec Art Company or singing for the city's symphony orchestra, she is assigning stories for the paper, which has a weekly circulation of about 2,000 and a $47 annual subscription fee. The paper covers the anglophone community and is kept alive through subscription and advertising revenues, a grant from the Canadian Heritage Department and support from its Ontario owners.

She started as a volunteer in 2010, not long after the former paper's owners wanted to shut it down for lack of funds. "The printers refused to print any more newspapers until the bill was paid," Nadeau said. Then the Stanton family of King City, Ont., bought the paper and paid creditors.

"It's not a money-maker," Nadeau said in her living room, while her husband, retired naval officer Charles Andre was working in the next room. "They are forking out their own money to keep this paper going. God love them."

Quebec City's anglophone community began to shrink dramatically in the 1960s and 1970s, Nadeau said, following the rise of the sovereigntist movement in the province, which sparked an exodus of many English-speakers and big companies.

Today it is a mixture of the remaining descendants of the historic community — who are now mostly bilingual — as well as newcomers whose first language is often neither English nor French, but who know enough English to want services in that language, Wellens said.

There are no anglophone neighbourhoods anymore, she said. But there are English-language schools, which play a critical role in keeping the community alive. In Quebec, students are only able to attend English primary and secondary schools if one of their parents received most of their education in English in Canada.

Champlain-St. Lawrence, the region's only English-language public junior college, is a place where students can be heard starting their sentences in French and ending them in English. Quebec's strict language rules don't apply after high school, so the college, known as a CEGEP is open to everyone.

Students from the city's two main English high schools are given priority for spots at St. Lawrence, while entry for francophones is more competitive, said Adiba Chowdhury, 19, originally from Ontario. She speaks English at the CEGEP, French at work and Bengali at home.

Antoine Theodorakis was born in Quebec City, and his grandfather immigrated from Greece. "I speak more French," said the 19-year-old, but he chose the English-language college because he said it opens more doors. "A lot of people think St. Lawrence is a private school, and we're seen as rich kids," he said. "They say it's snobbish."

"Yeah, people think it's posh," said Chowdhury. But St. Lawrence, like any other CEGEP in Quebec, is publicly funded and students pay minimal fees.

Nineteen-year-old Jeremy Poulin's family goes back generations in Quebec City and he doesn't know whether to consider himself anglophone or francophone. "Depends on the day," he said with a chuckle. He said sometimes people make derisive comments when he speaks English on the bus. "I've heard more than once, 'Go back to your country,' addressed at me," he said.

But the St. Lawrence students all say they feel enormous pride at being able to speak English. "I feel very privileged," said Jade Trepanier, 19. "I feel superior in a sense. A lot of people will say to you, 'Wow, you speak good English.'"

For McCullough, he and his wife are thinking of eventually sending their two-year-old to school in English. He'd like to remain in Quebec City — but maybe leave town for a bit in the winter, when the facades of homes disappear behind mounds of snow that can reach bungalow rooftops.

"I think, sort of, May through October, there isn't a better place to be than Quebec City," he said.