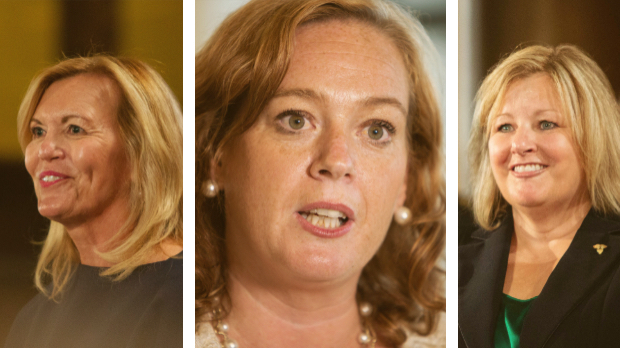 Ontario Minister Lisa MacLeod is flanked by Christine Elliott (left) and Lisa Thompson (right) in this collage of images taken on Jul 25, 2018 (MacLeod) and Jun 29, 2018 (Elliott and Thompson). Photos by Alex Tetréault, compiled by Alastair Sharp
Previous story
Next story

Premier Doug Ford's Ontario government offered on Tuesday to double the $320 million in funds it had initially allocated for an allowance-based autism support system and consult with the public on additional needs-based services, backtracking on parts of a policy overhaul that had outraged parents and caregivers when it was first announced in February.

Three ministers in Doug Ford’s provincial government with overlapping responsibilities for providing services to children with autism and other disabilities announced the changes to the policy. The latest move comes after the government sparked a sustained public backlash when the it said funding would be based on a child's age and their family's income rather than their individual needs, as it was under the previous Liberal government.

The Progressive Conservative government said it would drop the income-testing component in late March, meaning that all children under six diagnosed as on the spectrum will receive $20,000 a year and those over six will receive $5,000. The plan as originally designed would only give those maximum amounts to families making under $55,000. But advocates note that intensive therapy can cost between $50,000 and $80,000 a year.

While the initial budget for the new policy was similar to that for the previous Liberal one, it was stretched more thinly in order to cut into a waiting list of around 23,000 children waiting for services. About 8,400 children were receiving treatment under the prior arrangement.

The ministers said Premier Ford had authorized “additional flexibility” in recent weeks to re-configure the new autism policy after protests that reached the Queen’s Park legislative grounds. They promised to now listen deeply and act quickly to support every child with autism in the province.

On World Autism Day, Lisa MacLeod led the messaging as minister of children, community and social services. She was flanked by the minister of education, Lisa Thompson, and Health Minister Christine Elliott.

“I think we’re headed in the right direction but we’re going to need the support and the ideas and the vision of parents and we’re looking forward to accepting those ideas and that advice,” MacLeod told reporters at a news conference in the Holland Bloorview Kids Rehabilitation Hospital.

“Our plan is to modernize, to integrate, and to focus Ontario’s public health system around the needs of patients, families and caregivers,” she added. The government will launch an online public consultation (available for one month starting May 1 at ontario.ca/autism) and host telephone town halls also starting next month, she said.

Asked if the government had made mistakes in its handling of the file, MacLeod said “we’re just moving forward into a different phase.”

Hundreds of parents, therapists and union members gathered outside Queen's Park in March to protest the government's changes to Ontario's autism program, which families said would mean they would face financial ruin in order to pay for therapies for their children.

“For too long this has been a very difficult, emotional, and divisive file,” MacLeod acknowledged. “What we’re trying to do is lower the temperature.”

“For too long this has been a very difficult, emotional, and divisive file,” @MacLeodLisa acknowledged, as Ontario's PC government offered additional funds for autism services. “What we’re trying to do is lower the temperature.”

She later told the legislature that children were waiting on average 31 weeks to get a diagnostic appointment at five hubs across the province.

MacLeod said the government is now asking every provincial legislator to participate in roundtables and provide feedback, and will create an advisory panel on how best to add some $300 million in extra funding for the provision of service and supports based on diagnosed needs.

MacLeod said she hopes the changes afforded by the additional funding will be in place by the end of the summer and before the expiration of a six-month extension of service for those currently in government-funded therapy and other programs which the government hurriedly added to its Ontario Autism Program (announced on Feb. 11) after an immediate uproar.

After initially saying all people currently getting services or on wait lists would have to re-apply under their new allowance-based system, the government later granted them a six-month extension to the services they were already receiving.

Parents were outraged that the the Ford government introduced annual limits of $20,000 per year for treatment for children under six and $5,000 for older children (and hard lifetime caps of $140,000 for those entering the program before age six and $55,000 for those entering later), which they said was much less than the actual cost of services, which can run between $50,000 and $80,000 a year for children diagnosed with moderate to severe autism who require between 20 and 40 hours a week of therapy. There was previously no monetary limit on how much support a child could draw upon.

The additional money announced on Tuesday would double the funding available to Ontario’s five autism diagnostic hubs over next two years to help get children diagnosed earlier and connected quicker to services in their community.

Critics have pointed out that the drastic changes to autism programs would likely strain the education system as children with autism who lose access to therapy and other services provided in a community setting will likely enter regular classrooms or otherwise rely more heavily on schools.

Andrea Horwath, the leader of the Opposition NDP, said the “jury is still out” on whether the government had learned from its missteps and would include sufficient funding in its first budget, due to be tabled on April 11.

“What they have shown parents of children with autism already is that this government can’t be trusted,” she told National Observer. “They dragged those parents through hell and back again.”

MacLeod and Thompson said that Thompson’s education ministry had an additional $3 billion to spend on integrating kids with special needs into mainstream schools.

“Over and above what we invested this year, we are looking at investing an additional $3 billion for the next school year in 2019 and 2020,” Thompson said.

It was not clear whether they were referring to the province’s special education grant, which was projected to be about $3.01 billion in the 2018 budget and covers all accommodations made for students in all school boards across the province.

The ministries of education and social services did not immediately respond to a request for clarification.

Regardless of whether it is new money or not, the NDP’s Horwath said the Progressive Conservatives were working with a broken system after former Liberal premier Kathleen Wynne had “failed miserably” at integrating support for children with autism in the school system when she was education minister.

In 2018, $250 million over three years was allocated in the last budget of the Wynne government to shorten waitlists for assessments for the one in five students identified with special education needs and to improve access to special education programs and services in schools.

Green Party Leader Mike Schreiner said he was pleased to see the government do away with income-testing but hoped they will also do away with restrictions it imposed based on age and highlighted the chaos created by not adequately consulting before acting.

“The government should have done these kinds of consultations starting last summer, before they put parents and families and service providers in chaos,” he said, noting that several service providers in his riding of Guelph had been planning to lay off staff prior to Tuesday’s announcement.

“Now it’s having spillover effects on our education system as more children are going into schools without receiving the kind of therapy they need in the community,” he said.

He also said that the allowances-model imposed in February is not necessarily the best way to connect ensure newcomer families and those with language challenges can navigate the system to connect with relevant service providers.

MacLeod also said that the budget due to be tabled on April 11 would retain the same level of funding for the Social Services At Home program to help families caring for a child with a developmental and/or physical disability, which some critics has said they feared could be the next social support program to be cut.