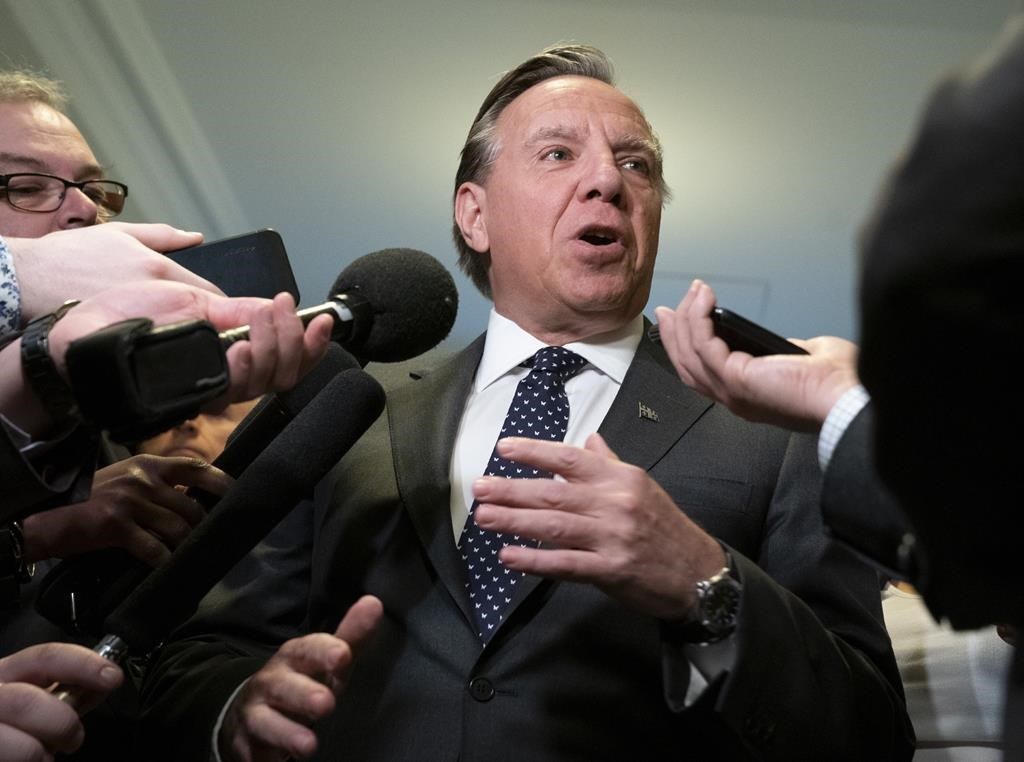 The Quebec government scrambled Tuesday to explain how its proposed secularism law would be enforced as a growing number of organizations said they are prepared to disobey it.

One cabinet minister said the police could be called in and another said injunctions could be sought, while Premier Francois Legault said he prefers not to specify what measures would be used.

Public Security Minister Genevieve Guilbault said citizens will need to respect the law and suggested the authorities could get involved. "People will notify the police. It's like any other law," she said, declining to elaborate.

Bill 21, which was tabled last week, would prohibit public servants in positions of authority — including teachers, police officers, Crown prosecutors and prison guards — from wearing religious symbols on the job. A grandfather clause protects people already hired in those positions.

Premier Francois Legault emerged from caucus later to tell reporters that Guilbault misspoke on a hypothetical situation, chalking it up to her inexperience. He added he is confident the eventual law would be respected.

"What we hope is not to take measures to respect the law, but, you know, there are ways that do exist," Legault told reporters. "I won't talk about measures that could be interpreted as things we are considering in the short-term, but I foresee that everyone will conform."

Justice Minister Sonia LeBel said she finds it troubling that some opponents of the bill are suggesting conscientious objection as an option. LeBel was responding to a suggestion by prominent civil rights attorney Julius Grey that people could disobey the bill on principle.

LeBel said police would not be enlisted to enforce the law, but the government could seek court orders requiring recalcitrant school boards and municipalities to respect its provisions.

Legault has defended his government's use of the notwithstanding clause to block court challenges, calling it a "legitimate tool" that has been used by other Quebec premiers. The clause would override certain protections contained in the federal and provincial charters of rights.

Asked about options open to public servants who do not want to enforce a law they consider discriminatory, Grey said there are situations where disobedience is justified.

"If they are told they have to eliminate the best candidate because they are wearing a turban, a scarf or a kippa, they may well say 'I can't,' " Grey said in an interview.

"When a government passes a law that may have an effect on conscience and then takes it out from under the Charter of Rights and Freedoms, you have to expect that some people are going to say 'What can I do? I just can't obey.' "

LeBel said she is troubled by that line of thinking.

"They have a right in a democratic society to speak on a bill," LeBel said. "Where I find it crosses a certain line is saying we'll flout a law that could be legitimately passed by the National Assembly. I find that slightly troubling." She said calls for "civil disobedience" are irresponsible.

Grey said flouting a law on principle when it violates a fundamental right is not the same as disobeying all laws.

"I think it's impossible to exclude a conscience-driven refusal to obey," said Grey, who made a similar argument when the previous Parti Quebecois government introduced a charter of values banning conspicuous religious symbols for public servants.

"It's part of what I call the safety valves in democracies to make sure we don't become prisoners to majorities and rules," Grey added. "Liberal democracy mean majorities decide policy matters, but individuals are free to act on their conscience."

Politicians representing 15 suburbs on the island of Montreal have said they are uncomfortable with the plan to oblige some city staff to remove religious symbols at work. Montreal West Mayor Benny Masella said possible municipal workers affected include public security officers, police officers and city clerks.

"What's important for us is that we get the most competent people — not the most competent people who don't wear a religious symbol," said Masella, who is president of the Association of Suburban Municipalities. The association said in a joint statement that the bill "does not reflect the values of respect, solidarity, freedom and equality that are shared in our communities."