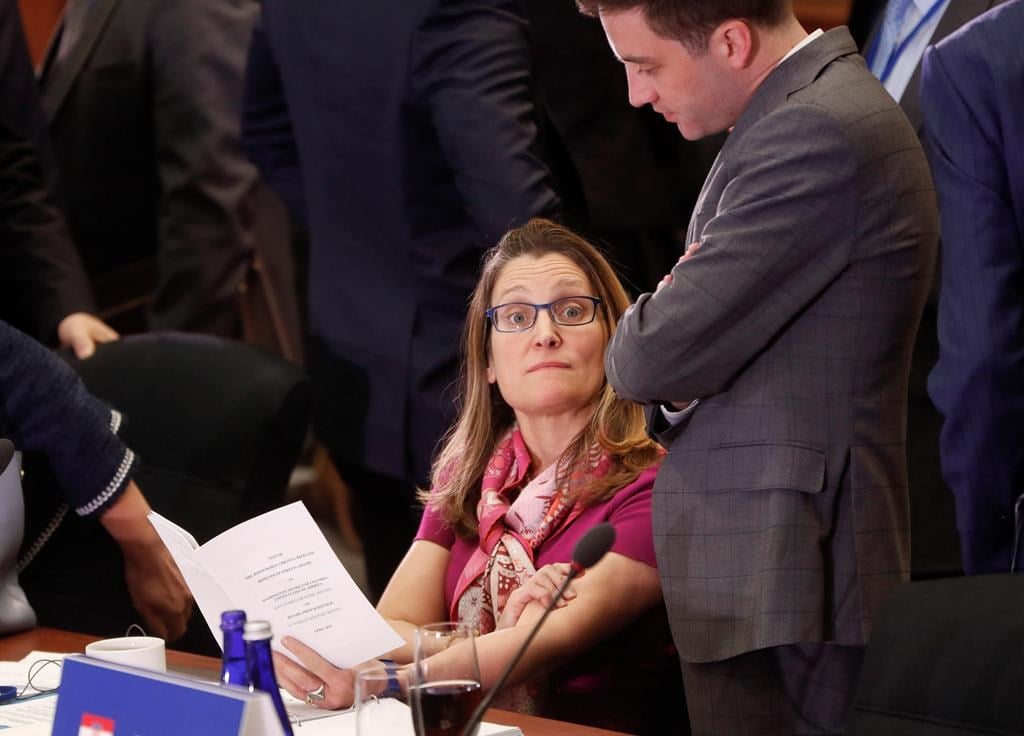 Canada's Foreign Minister Chrystia Freeland, talks with an aide at the Meeting of the North Atlantic Council in Foreign Ministers' Session 2 at the US State Department in Washington, on Apr., 4, 2019. Photo by The Associated Press/Pablo Martinez Monsivais
Previous story
Next story

"I think our judgment is interference is very likely and we think there has probably already been efforts by malign foreign actors to disrupt our democracy," Freeland said Friday in France, while attending a G7 ministers' meeting.

The G7 is seized with the issue of foreign intrusions in democratic countries and Freeland made the issue a top priority when Canada hosted the bloc last year.

She did not specifically mention Russia, but there were widespread reports of that country interfering in Ukraine's recent presidential election.

"What I think we're seeing is something that is happening in many liberal democracies. The effort is not so much to secure a particular outcome in an election," she said. "The effort is to make our societies more polarized and to make us, as citizens of democracies, more cynical about the very idea that democracy exists and that it can work. So we're very mindful of it."

Canada has learned important lessons from countries like Ukraine, which is seen as a veritable laboratory for malign Russian cybermeddling and disinformation, Freeland said.

The minister talked about Canada's creation of a "critical election protocol," including a group of five senior public servants who will decide whether a malign act of interference in this October's federal election warrants going public in the middle of the campaign.

"Probably the most important and most powerful defence is an aware citizenry," Freeland said.

Freeland was joined by her British counterpart, Jeremy Hunt, and the international human-rights lawyer Amal Clooney in giving further details about a joint Canada-British summit on media freedom in London this summer.

Both ministers promoted the need to protect freedom of the press as a core tenet of keeping liberal democracies strong in the face of unprecedented threats.

"The U.K. together with Canada has decided that democratic countries need to stand together to make it an international taboo of the highest order to murder, arrest or detain journalists," said Hunt.

Clooney, whose clients include two Reuters journalists imprisoned in Myanmar, praised Canada and Britain for shining an international spotlight on media freedom.

"Those with a pen in their hand should not feel a noose around their neck," she said.

The Ukrainian ambassador to Canada has told The Canadian Press that his country's critical infrastructure and digital election systems were hit with daily cyberattacks from Russia during the recent campaign.

Ukraine continues to cope with Russia's annexation of its southern Crimea region in 2014 and the continuing pro-Russian rebellion in its eastern Donbass region.

Former Canadian foreign minister Lloyd Axworthy, who led a team of 160 independent Canadian monitors to Ukraine, has said the country was able to withstand Russian cybermeddling, but its more conventional military forces kept more than a million voters from the polls in Crimea and the Donbass.

Canada will also host an international conference on Ukraine's economy and political reforms in July that will include foreign ministers from the European Union, the G7 and NATO countries.