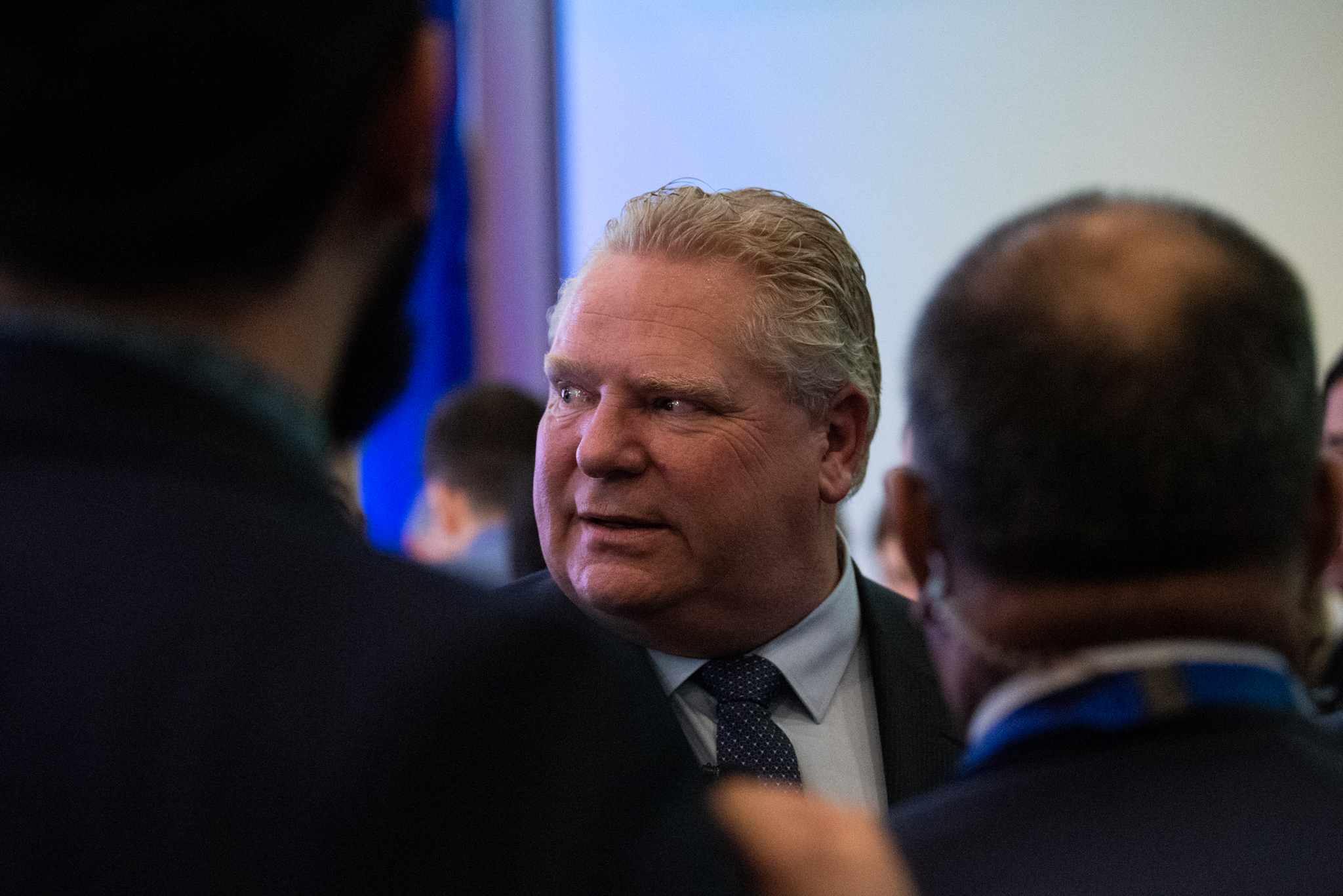 The head of a new national climate change institute says she is "perturbed" by a recent partisan attack from the office of Ontario Premier Doug Ford.

The new institute, called the Pan-Canadian Expert Collaboration, is meant to hold Ottawa to account on its policies to reduce carbon pollution. The eligibility requirements for the competitive process that established it were that Ottawa would play “no role” in its governance, operations, board or activities.

But on Tuesday, David Tarrant, Ford’s executive director of strategic communications said that description was all “Liberal spin.” In a tweet, Tarrant cast a skeptical eye on the institute’s independence, calling it an “elite pro-carbon tax ‘institute’” that contained “puppets.”

Ford's office declined to cite any evidence to back up its claim that the new climate change accountability institute was biased.

Now, two leaders at the new group are speaking out, saying they have no intention of being “partisan.” They pointed to guardrails they say will ensure any federal government stays out of their affairs.

“I did not join this institute and agree to initially lead it unless I was assured that this would be independent, and arms-length,” Kathy Bardswick told National Observer Wednesday.

“In terms of its independence, I’m perturbed by this tweet. Yes, it’s being funded by way of startup by the feds, but it’s independently governed, and that governance structure is robust,” she said.

“We really need to change this dialogue (on climate change), move it away from this partisan starting point to one that is well grounded, credibly supported, inclusive, representing interests from coast to coast to coast, generating the kind of positive discussion that is absolutely essential.”

'The institute is not about partisan politics'

As a sustainability and insurance expert, Bardswick is the former president and CEO of The Co-operators Group, a major Canadian insurance co-op. According to a bio at Foresters Financial, she has been underwriting supervisor and regional vice president of the general insurance company at the Co-operators, and held multiple chief operating officer roles there as well.

Bardswick also sat on the government’s North American Free Trade Agreement Council on the Environment, alongside two former premiers, the former president of Shell Canada and others. The body was formed in 2017 to advise Environment and Climate Change Minister Catherine McKenna on the environmental protections Ottawa was seeking in the trade talks to replace NAFTA.

She will be joined at the institute by Nancy Olewiler, an environmental economist and the director of the School of Public Policy at Simon Fraser University. Olewiler has been an adviser to that school’s Adaptation to Climate Change Team.

“The institute is not about partisan politics, but finding viable and effective policy solutions to sustain Canada's long-term prosperity,” Olewiler told National Observer.

“The new institute consists of academics from across Canada who are experts in their respective fields with long track records of producing highly credible evidence-based research,” she said.

“We have a robust governance framework that is independent of whomever is the federal government of the day. We want to get on with dealing with the significant issues that face our country and affect our future and intend to do so.”

The eligibility requirements stated that the institute must put in place a board of directors that would be responsible for its “management, strategic direction and financial accountability” as well as reporting requirements like a corporate plan, annual reports and audited financial statements.

These details would be hammered out in a contribution agreement signed between the institute and Environment and Climate Change Canada “within 60 business days of the notification of approval.” Bardswick said that agreement is still “a work in progress.”

McKenna said the institute will be "eligible to receive up to $20 million over five years" to implement its vision. The details of how that funding will be transferred are also still being worked out.

The board will have “fiduciary and strategic oversight guided by three expert panels,” Bardswick said. The institute is expected to have three main areas of focus: clean growth, adaptation and mitigation.

Bardswick’s former workplace, The Co-operators Group, is no stranger to climate change-driven extreme weather events. Last August, it made its storm surge insurance coverage available to homeowners in New Brunswick, Newfoundland and Labrador and Prince Edward Island for the first time, after Atlantic Canada was hit with significant flooding.

About three-quarters of insurance companies in Canada have introduced overland flood insurance as weather patterns change, the Insurance Bureau has said. Blair Feltmate, the head of a climate adaptation centre at the University of Waterloo, who is another leader at the new institute, said flooding is the number one cost to Canada, relative to extreme weather risk driven by climate change.

A major peer-reviewed scientific report released this month showed Canada is warming at double the average rate of the planet, and that the majority of this warming is likely caused by human activities like burning fossil fuels such as coal, oil and natural gas, which release heat-trapping carbon pollution. The report showed climate change is heightening the risk of extreme heat waves, wildfires, floods and declining freshwater availability in Canada.

"Scenarios with limited warming will only occur if Canada and the rest of the world reduce carbon emissions to near zero early in the second half of the century and reduce emissions of other greenhouse gases substantially," it stated.

The Canadian government has previously funded a non-partisan and independent research organization that tackled similar issues. The National Round Table on the Environment and the Economy was created by the Tory government of former prime minister Brian Mulroney in 1988, but later shut down through a decision by the Harper government to terminate its $5 million in annual funding in 2012.

Asked about the institute Tuesday, Ford's director of media relations Simon Jefferies said "elite economists may sit in their ivory towers and lecture hard-working families about the need to make everything more expensive, but they will never understand the struggle of counting the pennies and living paycheque to paycheque."

"Supporting a carbon tax may win you brownie points in the faculty lounge or win the praise of jet-setting Hollywood elites, but it is not the only way to fight climate change,” he said. He pointed to the provincial government’s environment plan, which he claimed will meet federal carbon pollution reduction targets “without imposing a punishing, job-killing carbon tax on already stretched taxpayers."

Jefferies was asked twice whether he has any evidence to back up Tarrant’s claim that the institute contains puppets. “My previous statement stands,” he said Wednesday, referring to his comments on “elites.”

On Wednesday, National Observer also asked federal Conservative Leader Andrew Scheer on Parliament Hill what he thought of the new institute, and whether he considered it a waste of money.

But instead of addressing this question directly, Scheer pointed to the backlash the government received over a $12-million federal contribution by McKenna to Loblaws to help make refrigerators in hundreds of their stores more energy efficient. The controversy arose because the company had hundreds of millions of dollars in net earnings last year.

“When you look at what the government’s been spending money on — the $12 million to a private company that has made hundreds of millions of dollars in profit, giving $12 million to Loblaws — while at the same time, charging Canadians higher fuel costs, higher home heating costs, we disagree with this government’s approach both to taxing Canadians and to their inaction on climate change,” Scheer said.

It's not clear whether the institute could pursue its activities beyond 2019, if a new government is elected that cancels its funding.

Never understand the challenge of counting the pennies and living paycheque to paycheque? How can they talk out of that side of their mouths when they have done their level best to shove those hardworking families back into the poverty pit by zapping the minimum wage hike and slashing the basic income support pilot? FORKED TONGUED HYPOCRITES!!!!

I think Ms. Bardswick should

I think Ms. Bardswick should contrast how their institute is insulated from political influence versus Doug Ford's Bill 57 which either eliminated every watchdog of his government or made his government their boss. As Betsy said, "hypocrites". We would all be better off if God would grant these people some shame.

The Conservatives are so far

The Conservatives are so far wrong on this file, it is unfathomable to me why they would continue to dig the hole. In a very few short years, the lessons are going to be so clear that even the dimmest bulb on the prairies will be able to tell the reality from the political spin. What will they then say?

Conservatives are just using the old playbook of every far right government, which accuses people with an education and/or a concern for social or environmental imbalances as "elites" and "enemies of the common people". Apparently, if you are less well off, you can be counted on to blindly re-elect those charlatans who steal money and services from you with their right hand, as long as with the left hand you are pointing at "elites" as being the cause of all the problems.

Hopefully there aren't actually that many adults around who enjoy Conservative politicians using sleight-of-hand and continuous distraction, to end the programs that support, educate, protect, and care for Canadians, even if it involves the good fun of them telling lies, hurling insults, exaggerating wildly, and blaming outsiders / elites/ diversity/academics for all bad things.

If there are that many adults around who buy this crap, no doubt it's a reflection of the success of Conservative governments in their goals of reducing access of Canadians to education. No coincidence,