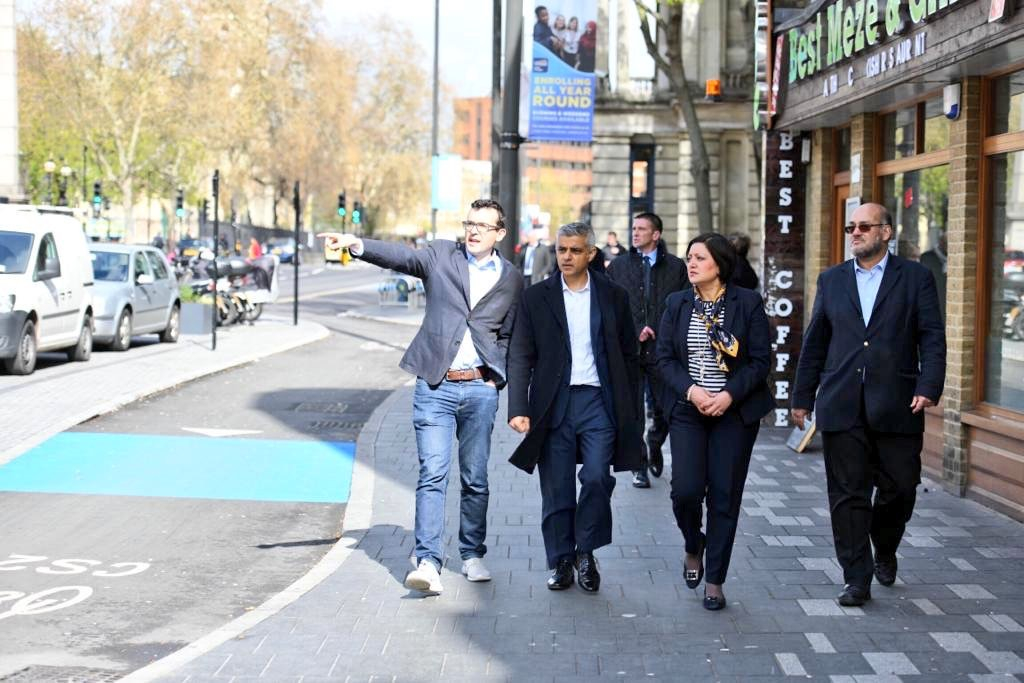 A new charge is now being enforced on dirty cars entering central London in an effort to reduce the toxic levels of air pollution that kill thousands of people in the capital city each year.

Green and red road signs warning drivers that they are entering into an ‘ultra-low emissions zone’ (ULEZ) started cropping up in central London at the end of 2018. Commercial and passenger vans, lorries, coaches, buses, cars, and motorbikes will now need to meet emission standards or pay a daily charge.

The ULEZ officially came into full force on April 8. It has outraged some small business owners and roadside associations but has been praised by European mayors, medical associations, environmentalists, and concerned parents.

London’s ULEZ is the only 24-hour emissions charging scheme in the world. Its emissions standards are stricter than those in other cities — although unlike some of its European counterparts, it does not ban dirty cars outright, but charges them. Milan and Paris both ban dirty cars at certain times of the week; Barcelona enforces a ban on days where air pollution skyrockets. All three of those cities' emissions requirements are less strict than London's.

Mayor of London Sadiq Khan said his plan to clean up London's air is the "boldest of any city on the planet." The goal is to cut nitrous oxide emissions from exhaust in central London by 45 per cent by 2020.

This world-leading scheme is just one of the bold changes we’re making to tackle toxic air. #ULEZ#LetLondonBreathe #CleanAir pic.twitter.com/j0cIHK80XS

Kate Laing, mobility management programme manager for the C-40 Cities Climate Leadership Group (which counts London, Vancouver, Toronto and Montreal), told National Observer that the ULEZ was “a powerful instrument” that will “really significantly affect the decisions people make about how they move around the city and the vehicles they are choosing to move around in.” C-40 is a coalition of 94 global cities fighting to tackle climate change.

The ULEZ charge will be added to an £11.50 ($20) congestion charge — raised on all vehicles regardless of model — that has been in place to reduce traffic in working hours in central London since 2003. Enforcement of the ULEZ will rely on the cameras already set up to monitor congestion charge infractions.

Electric vehicles are exempt from both charges.

Khan said the city's toxic air is “an invisible killer responsible for one of the biggest national health emergencies of our generation. I simply refuse to be yet another politician who ignores it. The ULEZ is the centrepiece of our plans to clean up London’s air.”

Research published by Kings College London in 2015 revealed that air pollution kills more than 9,400 people in the city each year. The levels of nitrogen dioxide in many areas of London are two to three times higher than limits set by the European Union. In 2018, the European Union’s executive arm referred the U.K. to court for failing to reduce its dangerous air pollution levels.

Research commissioned by the mayor in 2017 revealed that more than 800 nurseries, schools, and higher education institutions are in areas with dangerous levels of air pollution. Researchers have proven a correlation between children being born in London’s most polluted areas and their lung capacity. The high profile case of nine-year-old Ella Kissi-Debra, who lived near one of London’s busiest roads and died from acute respiratory failure in 2013, has added fire to the national conversation.

Opponents call it a stealth charge

Small business owner Zorica Zrnic lives in south London and runs a vintage clothing business. She told National Observer that she will no longer be able to trade her goods at a central London market. Her profits at the market do not justify the extra rate for a driver and she does not own a car. “This will sanitize London and make it even more corporate-dominated,” Zrnic said.

The scheme is expected to raise about £213 million ($372 million) in its first year, of which £50 million ($87 million) will be spent on operating costs. Janine Rasiah, a spokesperson in the mayor’s office, told National Observer that money gained from the scheme will be reinvested into improving London’s roads, cycleways, buses and subways and initiatives, like the ULEZ, dedicated to cleaning up London's air.

“Transport for London (the municipal transport authority) are spending much more on improving air quality, around £800m, than they expect to receive through net income from the ULEZ,” Rasiah said. Air quality initiatives include developing a national diesel scrappage scheme, the ULEZ expansion, purchasing hybrid and zero-emission double-decker buses, retrofitting older buses in order to reduce their emissions, and recalibrating the bus network so that the cleanest buses are concentrated on the dirtiest routes.

The Motorcycle Industry Association says Transport for London is operating in a "legal gray area," given that the current default is to charge motorcycles and scooters that may not exceed the required nitrous oxide limit. According to a press release, this "could be subject to a legal challenge. This has been pointed out to TfL by MCIA. They have not responded."

Conservatives in the General London Assembly slammed the Labour mayor’s decision to move the plan forward 17 months earlier than originally planned. Conservative leader Gareth Bacon said it would “hammer small businesses and the poorest residents who weren’t expecting the charge so early.”

Rasiah said that the mayor is “helping micro businesses, charities and low-income Londoners switch to cleaner vehicles through his £48 million ($83 million) scrappage fund.” The initiative provides a financial incentive for small businesses to replace their dirty vans with electric vehicles, standard-compliant vehicles or join a rental or car-sharing scheme. The fund was announced in December and doubled by the mayor in February just weeks ahead of the introduction of the ULEZ.

In 2021, the zone will be expanded to an area in which 3.8 million Londoners live, covering 378 square kilometres.

As a result of our toxic air, there are children in parts of London whose lungs are underdeveloped.

The Ultra Low Emission Zone is one of our commitments to #LetLondonBreathe. Today a #ChorusForCleanAir of children and parents visited City Hall to celebrate it's introduction. pic.twitter.com/sUwZZN7E0k

Most low-emissions zones are in Europe

There are more than 260 low emission zones in European cities, according to a 2018 report by research group Transport & Environment. First created in Sweden in the 1960s, by 2011 there were more than 150. That number mushroomed after a car emissions fraud scandal in 2015 that revealed that Volkswagen had been cheating emissions tests and spewing illegal levels of pollution on Europe’s roads. Illegal software installed on vehicles meant that vehicles emitted 10 times more toxic nitrous oxides than accounted for in regulatory tests.

The EU's executive arm, the European Commission, also alleged on April 5 that BMW, Daimler and Volkswagen had colluded "to restrict competition on the development of technology to clean the emissions of petrol and diesel passenger cars between 2006 and 2014. The technologies in question reduce nitrogen oxide emissions from diesel cars and filter emissions in gasoline vehicles. The German carmakers face fines of up to 10 per cent of their annual worldwide sales.

Several cities in North America are considering congestion pricing, C-40’s Laing said, including Vancouver Los Angeles, Portland, Seattle and New York City. “There's a move towards creating economic incentives to try and shift decisions people make about whether they drive. And part of that is providing exemptions for cleaner vehicles,” she said. (Congestion charging differs from emissions charging in that it charges vehicles for being on the road, and not because of their emissions standard.)

North American cities often face a more complicated institutional framework, which can make progress in mobility solutions trickier, according to Laing. For example: “Vancouver has nine metro mayors and the province [to deal with in its current mobility pricing scheme], and the mobility pricing conversation is one that’s going on between all of them,” she said.

The Mayors Council of Vancouver, which includes 21 mayors, set up a commission in May 2017 to examine options for mobility pricing and deliver them to local transportation authority TransLink. An initial report was published in May 2018 which looked at two charges that would reduce congestion in the city by 20 to 25 per cent. The first to charge drivers once they enter into a certain area of the city and the other was to establish distance-based charges. In the latter scenario, drivers would be charged for each kilometre, with the amount varying depending on where they go and at what time.

This world-leading scheme is just one of the bold changes we’re making to tackle toxic air. #LetLondonBreathe #CleanAirpic.twitter.com/aHJ1zNH5WT

The layout of North American cities presents a challenge to congestion and emission zone designers. European cities typically have dense urban cores where economic activity takes place. This is the result of being built in the pre-automobile era, when movement was restricted to walking.

North American cities tend to have more dispersed centres of economic activity. “So it's not always as straightforward as drawing a cordon like the ULEZ around the central area and creating a huge effect,” explained Laing. “It requires much more interesting kind of design to make sure that you are putting in place a charging scheme that influences people positively.”

By The Canadian Press | News, Politics | April 11th 2019
Reports from the Race to a Safer World

Haven't been to UK or Europe

Haven't been to UK or Europe siince the early 2000's but the diesel exhaust and filthy air could be easily felt and seen in the smuts that landed on clothes etc. Recent air quality research results have proven that toxins/particulate matter are a definite health hazard and noted their persistance alongside busy motorways and alarmng spikes during periods of maximum congestion. Living, walking and bicycling in these areas is a high risk health hazard. London's Mayor is on the right track - More power to him.