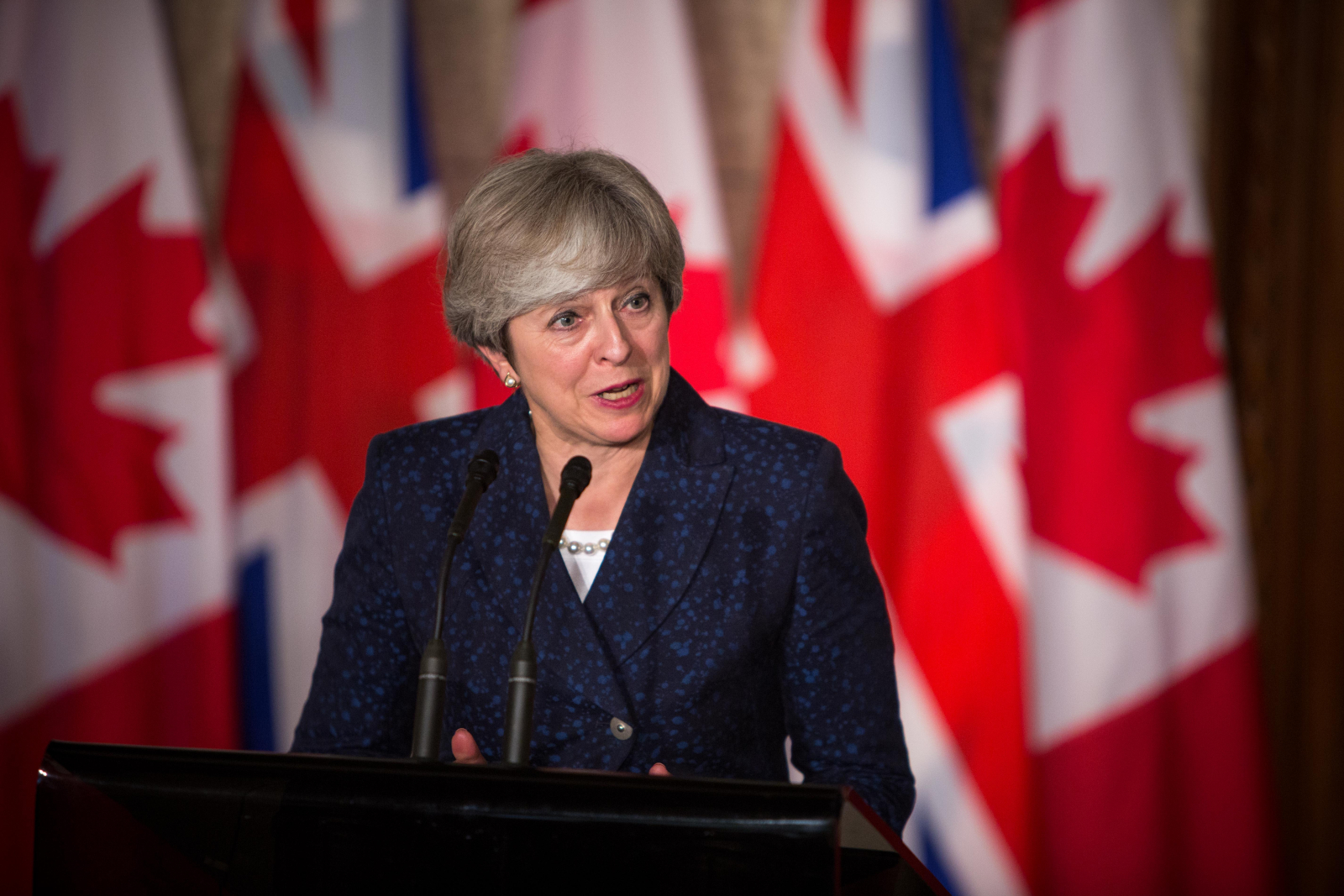 British Prime Minister Theresa May talks to reporters in Ottawa during a trip on Sept. 17, 2018. Photo by Alex Tétreault
Previous story
Next story

The British government has proposed to weaken environmental oversight as part of its plan to leave the European Union, creating a situation that critics say will leave serious gaps, especially if the United Kingdom plunges into a no-deal scenario.

Britain’s official departure date from the European Union has long been planned for March 29, but that could change next week, given that no withdrawal agreement has been approved by Parliament. British Prime Minister Theresa May has failed twice to get the Brexit deal she has negotiated with Brussels past her parliamentary colleagues, suffering the biggest defeat by a sitting government in history on the first try in January.

British lawmakers now face a choice between passing Theresa May's deal next week or precipitating the U.K.'s departure from the EU with no deal at all. The EU said on Wednesday afternoon that it was only willing grant a "short extension" of the Brexit deadline provided that British lawmakers pass the withdrawal deal next week.

The government has done extensive preparations for Brexit, including the proposal of new environmental legislation to replace the current system of environmental principles and governance set out by the EU.

But that bill is yet to go through Parliament, and if the U.K. plunges into a "no-deal" scenario, it isn't clear what would be in place to protect the environment.

When asked by National Observer on how it intends to address the potential environmental gaps caused by a potentially chaotic no-deal Brexit scenario, the British government declined to comment.

A government spokesman would only say that it planned to introduce "interim measures” in the event of a no-deal Brexit. But he declined to share details of what those measures might be.

The national Department for Environment, Food and Rural Affairs has described its bill as "world-leading." But professional planners, the House of Lords and environmental groups disagree. In fact, they say that, if adopted, the bill would weaken environmental protections.

For example, the new bill would create an England-only environmental watchdog who would have less powers and independence than the EU's oversight system, they say.

The EU's executive arm, the EU Commission, currently has the power to levy hefty fines on the U.K. and take it to the European Court of Justice when it breaks environmental law. It exercised that power in 2018 when it referred the U.K. to court for failing to reduce dangerous air pollution levels.

The new post-Brexit watchdog for England, the Office of Environmental Protection (OEP) would be funded by the government and wouldn't have the power to levy fines on public bodies and the government. Board members of the watchdog would be appointed by the Secretary of State (the minister for environment).

"A world in which nation states are cooperating closely on [environmental] issues is one that is much more likely to make headway" – lessons from a chaotic #Brexit from @greeneruk_. @cecilia_keating reports

Critics are concerned that this would comprimise the OEP's independence, given that one of its main functions is to hold the minister to account. A better model, according to the House of Lords, is for the legislature to be given a greater role in the appontment of members and allocation of budget.

Calum Finlay, spokesperson from the Department for Environment, Food and Rural Affairs, did not comment on the criticism. He said the government has “been very clear that we will not weaken any of our existing environmental protections when we leave the EU but will instead maintain — and even enhance — our already high environmental standards."

Amy Mount from the Greener UK coalition told National Observer that the government’s proposals “are not strong enough. The [watchdog] body as currently proposed would not be sufficiently independent of government, and it doesn't have enough powers to match up to the role that the EU plays at the moment. So, there's a lot of work to do to improve those proposals, even if there is a deal.”

The U.K. is in the process of copying 12,000 EU regulations into the domestic lawbooks.

What if there is no deal?

While MPs have indicated that they are against a no-deal scenario, it remains the default outcome if nothing is settled in parliament, or if the EU rejects the U.K.’s request for an extension.

If British MPs agree on the terms of a withdrawal agreement next week and a short extension is approved, the U.K. would enter into a planned two-year ‘transition period,' triggered by its exit. This would give the British government time to pass key pieces of legislation, like the environment bill drafted in December, while they remain bound to EU institutions and law.

If MPs fail to reach an agreement in Parliament and the EU rejects the U.K.’s request for an extension, the U.K. will crash out of the EU in a ‘no-deal scenario.' This would mean that the U.K. would immediately leave the EU's institutional structures without a transition period in a scenario likely to have serious economic repercussions. This no-deal scenario could be stopped if the U.K. successfully solicits a 'long extension' from the EU — something that has has not been explicitly ruled out by the bloc. If it comes to this, May has said she will resign.

A no-deal would also have “potentially dire consequences” for the environment, according to a report published earlier this month by Greener UK, a coalition of British environmental group that includes Greenpeace, WWF and Friends of the Earth. The group has been tracking the environmental implications of Brexit since shortly after the June 2016 referendum. All eight of policy areas that the coalition has been tracking — air, water, waste, farming, chemicals, climate, fisheries and nature protection — are now an angry red, at high-risk.

"The risk to the environment has gone up dramatically because we're faced with the imminent prospect of no deal," Mount said. "That causes problems across the board, across all of our environmental protections."

Greener UK is also concerned that the economic collapse caused by a no-deal Brexit could increase political pressure to weaken environmental protections. “Historically in times of economic downturn or slowed economic growth, the environment tends to fall off the political agenda or become the target for deregulatory politics. That's something we are very worried about,” said Mount.

A no-deal Brexit would immediately rupture the U.K.’s existing trade agreement with the EU’s member states, and result in new tariffs and restrictions on food and products coming in and out of the U.K. In that scenario, the U.K.'s economy is expected to shrink by six to nine per cent over 15 years, according to government figures.

Mount said that the messy situation highlights the importance of "a spirit of collaboration and shared endeavour" when tackling environmental issues.

"Having transnational institutions and forums is important, because it can facilitate those conversations and those shared endeavours. It doesn't mean that you absolutely have to have them in order to make progress. But a world in which nation states are cooperating closely on these issues is one that is much more likely to make headway," she said.

Pivot to American regulation could be felt across the channel

On Wednesday, The Times of London reported that a free trade agreement with Canada will be signed “within days.” It will copy Canada’s economic pact with the EU for British companies.

Dozens of other trade argeements remain to be signed to compensate for the 40 trade agreements the U.K. is automatically part of with the EU.

In the U.S., chicken is treated with chlorine and animal feed laced with hormones. Both practices are banned under EU law. As a result, there has been a ban on the majority of U.S. meat entering the EU for more than 20 years.

Brexit provides fresh opportunity to renegotiate the terms of trade in the U.K. In February, the Trump administration published a report that made clear that it wants “comprehensive market access for U.S. agricultural goods” in any future post-Brexit deal.

The British government has said that it will not lower food standards to secure a post-Brexit trade deal with the U.S. But in a no-deal Brexit scenario, Greener U.K. fears the the government will scramble to negotiate a deal with the U.S. to compensate from the economic sting from its messy divorce with the EU. In that scenario, Mount said, “the power would be on the side of the U.S., which would be at leisure, where the U.K. would be trying urgently.”

If low-quality imports enter the U.K., it could result in significant pressure for British farmers to drop their standards to compete.

A reduction in food standards in the U.K. could reverberate across the channel on the European mainland. “There's still a chance that the U.K. could choose a more deregulatory direction to go in," said Mount. "That could in turn put pressure on the EU, because the U.K. is a sizeable economy.”