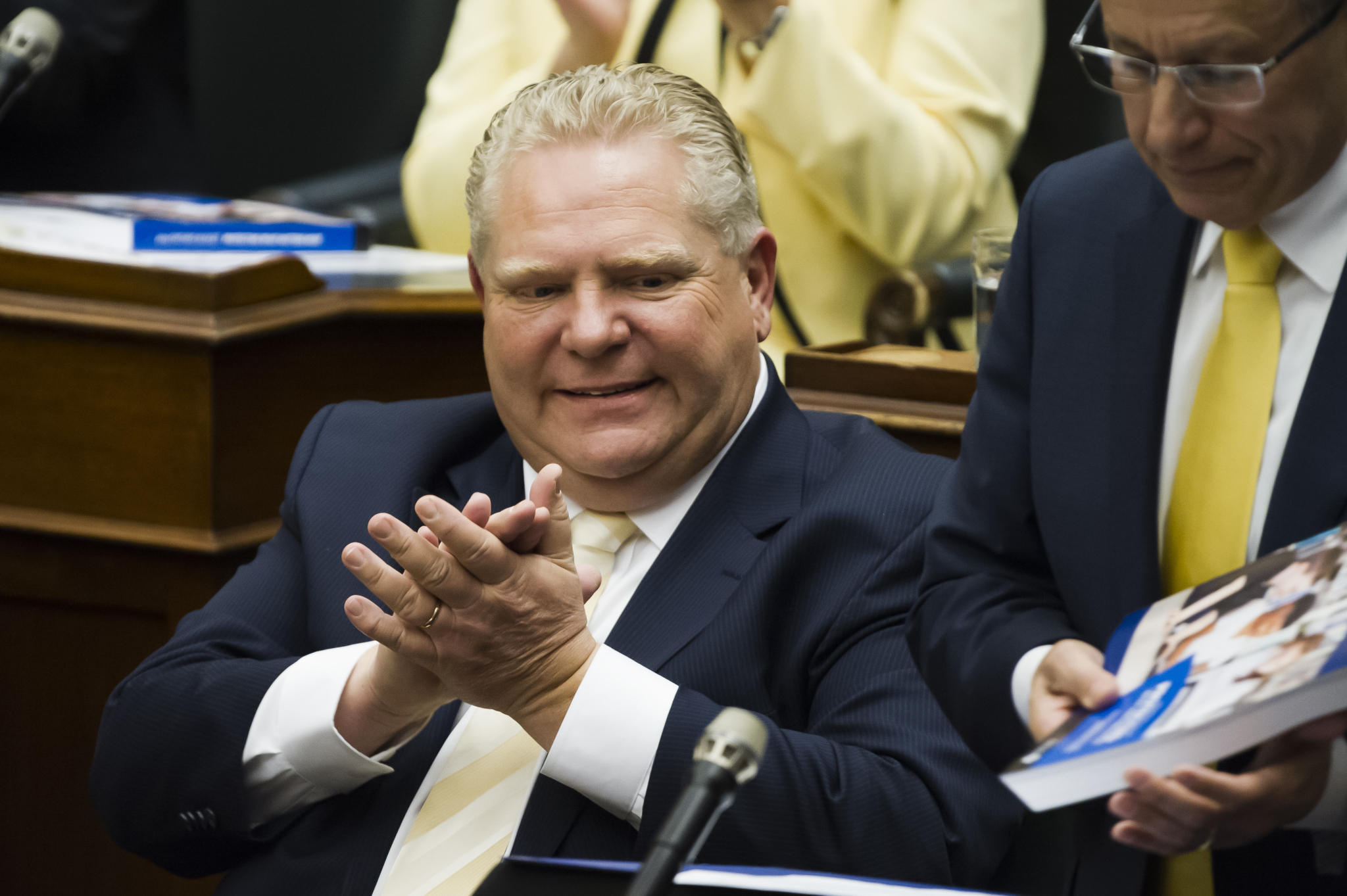 The Ontario government received a grilling from the bench on Monday, as it made its first legal arguments against a key plank of Prime Minister Justin Trudeau's plan to fight climate change, calling its carbon pricing scheme an unconstitutional tax.

The five court of appeal justices considering the province's challenge of the policy, which only applies to Ontario because the Progressive Conservative government of Premier Doug Ford nixed the province's cap and trade scheme last year, prodded the province's legal team with questions about what it would do instead.

Ford's government claims the tax will drive up the price of gas and heating fuel for Ontario residents (and by extension, the cost of everything affected by those higher costs), while the federal Liberal government insists it is responding appropriately to an issue of national concern - climate change.

The court questioned whether residents will actually be paying more.

“How is it a burden if 90 per cent of the money goes back to the same people who paid it?” one of the justices asked the provincial government's lawyer.

In fact, the federal plan provides for those in small and rural communities to get an extra 10 per cent back "in recognition of their increased energy needs and reduced access to energy-efficient transportation options."

Hunter said there was no guarantee that the rebates would be used by residents on climate action. In fact, he said they "could be used to buy a Hummer.”

Monday morning’s proceedings, however, focused not on the efficacy of the federal climate change plan or Ontario’s counterpart, but instead on which legislature had jurisdiction over carbon and other greenhouse gases that are warming the planet. Ontario is one of four provinces, led by conservative-leaning governments that are challenging the federal carbon pricing plan. The others are Saskatchewan, Manitoba and New Brunswick.

The federal carbon pricing mechanism doesn't apply to other Canadian jurisdictions that have taken action to put a price on carbon, meeting a minimum national standard established as part of a pan-Canadian agreement reached between Trudeau and the premiers in December 2016.

But Ontario argued that Ottawa's pricing on emissions would unbalance the “constitutional architecture” in Canada, a delicate division of powers between the federal government and its constituent provinces, and that the federal government could not just define climate change and the collective need to reduce emissions as a new matter of national concern which it could deal with however it wants.

The argument is that Trudeau's government had exceeded "local and provincial" jurisdiction as defined in Section 92 of the Constitution Act, a 1982 addition to the 1867 founding law of Confederation that until that time was known as The British North America Act.

The court challenge comes almost a year after Ford's Progressive Conservatives swept the provincial Liberals out of power, and vowed to scrap the province's existing cap and trade program (and the green initiatives it funded) and fight the federal carbon tax.

The federal Liberals, meanwhile, came to power in 2015 in part on a pledge to "provide national leadership and join with the provinces and territories to take action on climate change, put a price on carbon, and reduce carbon pollution." A federal election is due in October.

Its federal program, which came into force on April 1, applies in provinces that have no carbon-pricing regimes of their own that meet national standards. Ottawa says the legislation aims to "fill in the gaps" where provincial measures aren't up to par.

“This is not a reference about whether action needs to be taken. It does need to be taken. Ontario has taken action. It is still taking action.”

Hunter touted Ontario's closure of all of its coal-fired generating plants — a shutdown which began under Liberal Premier Dalton McGuinty in the early 2000s and was finished under his successor, Liberal Premier Kathleen Wynne — to prove the province's commitment to climate change.

He said it was one of the main reasons why the province shouldn't be imposed with a carbon tax. The closures are also featured in the Ford government's climate plan as the driving force behind the 22 per cent reduction in the province's greenhouse gas emissions compared to 2005 levels.

“Ontario is further ahead than all the other provinces. We just don’t get credit for that," Hunter said. He later noted that there was no “national systemic risk” caused by greenhouse gases and climate change.

Doug Ford’s lawyer just told the Ontario Court of Appeal that there is no “national systemic risk” caused by greenhouse gases and climate change. My goodness. @fordnation @ecojustice_ca

Since the election of the Ford government last June, Ontario has backtracked on numerous environmental initiatives, included nixing cap and trade, cancelling some 750 green energy contracts and winding down numerous energy conservation programs. It cut almost half a billion dollars from the combined budgets of the two ministries that deal with the environment in last week's proposed 2019-20 budget.

The last report of the Environmental Commissioner, a position the Ford government has discontinued, said that the Progressive Conservative's were increasing energy bills, air pollution and greenhouse gas emissions through policies that promote the use of fossil fuels.

Much of Hunter’s argument predicated on whether the the federal government had the jurisdiction to impose a carbon tax on provinces based on its international obligations, citing a 2011 Supreme Court reference that states, “the courts do not have the power to declare something to be constitutional just because they think it might be the best policy.”

The province is arguing that the Paris Accord, the global agreement to cut pollution in order to stave off more than 1.5-2 degrees Celsius of average global warming, is an international treaty that Canada has a right to sign but must cooperate with its provinces to implement. Just because a topic like climate change is of national concern, does not mean that provinces should be “compelled” to combat change within their boundaries by adopting “the federal government’s preferred method,” Hunter argued.

One justice questioned what the alternative was, considering that “it is conceded that these gases have no boundaries.”

Hunter replied by advocating for “cooperation and agreement.” The government could provide “funding and incentives” rather that imposing policies “as they see fit.”

If they do that, Hunter said the federal government would be “overreaching.”

Asked by one of the five justices on the Court of Appeal panel if Ontario was prevented from enacting its own laws and regulations to limit emissions, the province's lawyer conceded that the federal rules did not do so.

The justices pushed back on the provincial lawyer's argument that the federal government shouldn't impose a price on carbon, asking repeatedly, what if a province does nothing to reduce greenhouse gas emissions?

Hunter called this inquiry an “unreasonable hypothetical,” noting that every province has some sort of plan to do so.

One justice inquired if it would serve provinces better if the federal plan was focused on fighting “climate change” instead of reducing emissions.

If the federal government was allowed to have jurisdiction on climate change, he said, it would have powers over many other provincial matters such as agriculture, forestry, infrastructure, zoning, and even license plate lotteries (to restrict emissions from cars).

The carbon tax was already proving to be a “burden” for residents, Hunter noted, adding that the federal rebate (that is set to make up, and exceed, the carbon tax over time) was a way to force provinces to comply in order to get money in their coffers to use on climate action themselves.

Any provinces that didn’t agree were on a “naughty list,” Hunter said, and would forego this money and see cheques sent to residents directly.

Proponents of Ford’s carbon tax challenge were present at the court proceedings, as were environmentalists and activists who opposed it. Dozens of the latter held a protest in the afternoon, chanting “Climate action needs support, get Ontario out of court.”

The poll showed a roughly even split as to which level of government should have the final say on climate policy, while half accepted or supported the federal decision to implement a carbon price in provinces that failed to bring in a system of their own. (Note: Ontario would have been exempt from the federal scheme if Ford had not scrapped cap and trade.)

This week, Canada is voicing its support for pricing pollution because carbon pollution knows no borders. Taking practical, proven, and affordable action against climate change is in our national interest. We cannot afford to step back. https://t.co/yruJmn0wkq

Half of those polled said they support carbon pricing while one-third oppose it. However, only 37 per cent said they were aware that most of the money will be rebated to households (and the rest - around $1.45 billion over five years - will go to the province’s schools, hospitals, small and medium-sized businesses, colleges and universities, municipalities, not-for-profit organizations and Indigenous communities) under the federal government’s plan. Among those who opposed the plan, 55 per cent switch their position to support or accept once they learn about the rebate.

Ontario will to make its argument in their court challenge today. The federal government will present its case Tuesday. A variety of interveners will be heard Wednesday, including provinces such as Saskatchewan and British Columbia, Alberta Conservatives, Indigenous organizations who point out they are acutely vulnerable to global warming, as well as business and environmental groups.

This is a truly shameful

This is a truly shameful waste of taxpayers time and money......led by ideologues not unwilling to twist and lie about the carbon tax to rev up opposition to it. But in Alberta where we have our own program, many taxpayers are rebated more than they spent...and the rest of the money raised is funding our growing transitional industries, and research into clean tech.

Will likely be trashed as well if Kenny wins. But shame on all of us old white folks, if this is the best we can do about the imminent threat of climate change. Stupid denial only takes you so far.........and our kids and grandkids are going to have to live beyond it.

Well said. The right-wingers supposedly care about burdening our grandchildren with deficits but don't seem to care one whit about burdening them with a science-fiction hellscape. Bizarre!