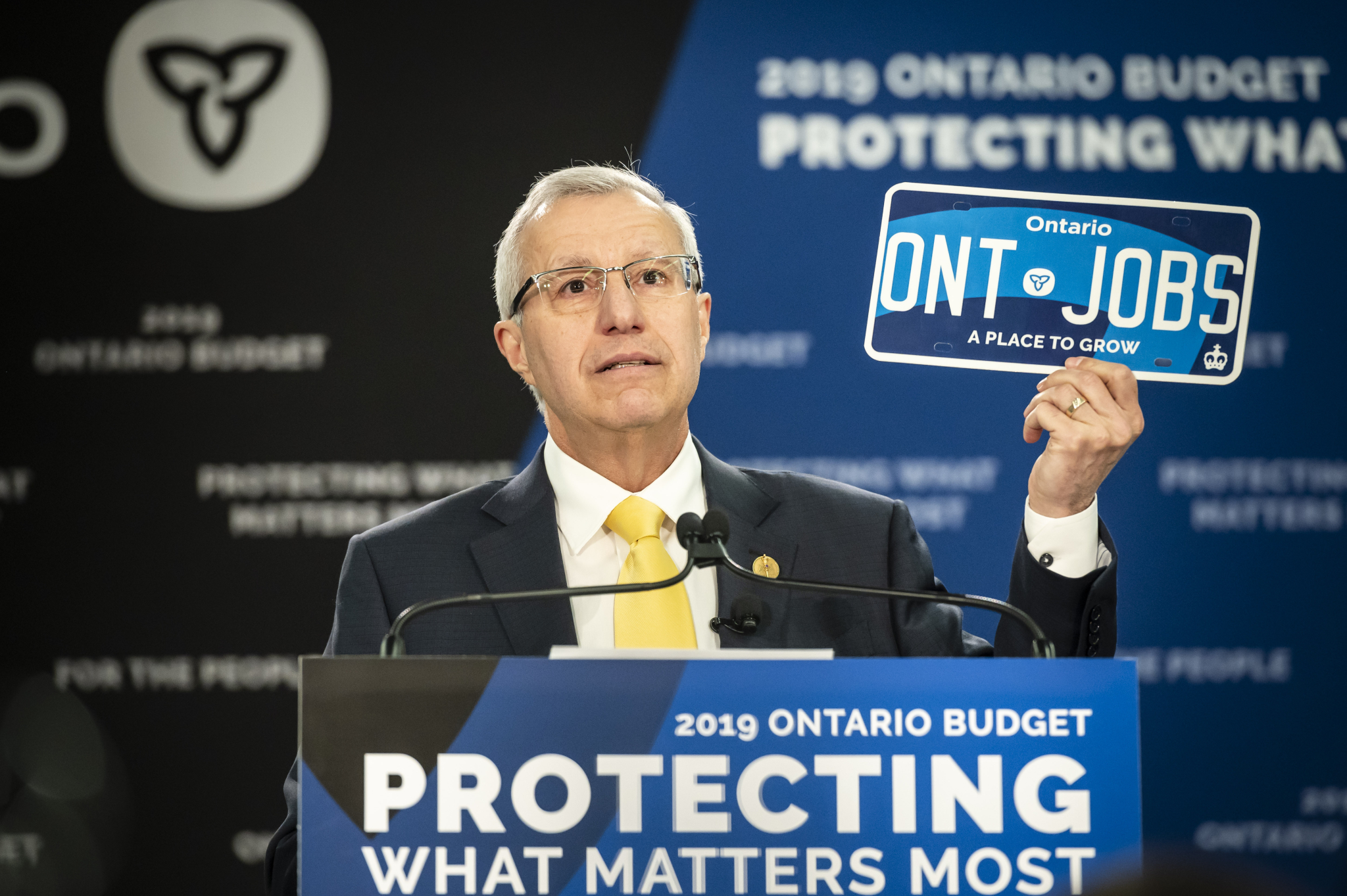 Premier Doug Ford's government is signalling to Ontario industry that it may be open to clean energy, while committing to fight climate change "without a carbon tax" and without any fresh funding.

In the first budget of its mandate, the Progressive Conservative government proposed to mimic a federal program that allows businesses to immediately write off investments made in clean energy and conservation equipment and upgrades.

The Ford government is proposing a $3.8-billion Ontario Job Creation Investment Incentive, part of which will go towards clean technology investments in Ontario, such as wind turbines, solar panels and electric vehicle chargers. It was not clear from the budget what percentage of the fund would go to these investments, or to what sector.

The proposal was one of the only new environmental policies proposed in the 2019 budget, where only six pages of the 343-document focused on environment policies. In fact, the budget for the Ministry of Environment, Conservation and Parks has been slashed by 35 per cent and that of the Ministry of Natural Resources and Forestry has been cut by 14 per cent. Combined, the budgets for the two ministries have been cut by $461 million.

“How are they going to come close to achieving goals they have in their climate plan with such a substantial decrease in funding?” Green Party Leader Mike Schreiner told reporters Thursday.

"The focus of the Ford government is on making cuts to really important programs. That includes the environment, but certainly not limited to the environment," she said in a phone interview from Washington, where she was co-chairing a World Bank and International Monetary Fund meetings about carbon pricing. "And this follows from a decision that apparently Premier Ford is going to legislate stickers that would violate misleading advertising laws in Canada by not reflecting the true costs of climate change, and also the Climate Action Incentive rebates. It's just sad that they're spending money on stickers and court cases while they're cancelling programs across the board. "

In a statement, Greenpeace's Keith Stewart — who is leading a challenging Ford's carbon gas stickers for gas pumps as misleading advertising — said this budget was "the most anti-environmental budget in Ontario since the deadly tainted-water disaster in Walkerton."

"The gutting of the Ontario’s climate action plan in combination with the taxpayer-financed partisan campaign against federal climate action expose a government that is deeply in denial on the urgency of the climate crisis," Stewart said.

Much of the budget focused on strengthening the business environment, making 47 references to the federal carbon tax and the province’s fight against it. (Nowhere did the budget mention that Ontarians would receive a rebate from the federal government to compensate for the carbon pricing plan that set in on April 1.)

“Winters are longer and far colder,” Finance Minister Vic Fedeli told reporters Thursday, speaking about his energy bill in North Bay, Ontario — the jurisdiction he serves as MPP. “My tax will be $550 more on my natural gas bill just because of the carbon tax.”

Fill up today ... tomorrow the Federal government is charging you more with a Carbon Tax that will result in a ¢4.4/litre increase to the price of gas. pic.twitter.com/kEiU1dc7Xk

The budget comes days before the provincial government will be in court to fight the constitutionality of the carbon pricing plan in Toronto. This legal action is expected to cost $30 million — a detail that was also absent from the budget.

Despite repeatedly noting they would fight climate change “without a carbon tax,” the budget offered few details on its plans for climate action — choosing instead to tout the policies the Ford government had axed to make cost-savings, including the cap and trade system, 750 green energy contracts and energy conservation programs.

The budget did not mention the costs of cutting these programs. Axing the province’s cap and trade system, alone, increased Ontario’s deficit by $3 billion, according to the province’s fiscal watchdog.

The only climate action proposed with a price tag attached was a $40 million commitment over the next three years to strengthen the competitiveness and innovation of the auto sector. This commitment would include leadership for new innovations such as hydrogen fuel cell technologies and automotive manufacturing and information and communications technology expertise.

The budget did not make clear how the government would attract this innovation. One government official told National Observer the commitment was to tell industry that the government is interested in clean technology.

The budget did not disclose an estimated cost for “Ontario’s first-ever climate change impact assessment” — a part of what the government calls its Made-in-Ontario environment plan — but said it would allow the government to “assess the best science and information to better understand where the province is vulnerable” to the "likely impacts of a changing climate.”

This "enhanced understanding" would allow the province to make better planning and investment decisions,” the budget said.

One expert told National Observer that this proposal would make Ontario the first Canadian jurisdiction to conduct a province-wide climate change impact assessment.

While the Green Party’s Schreiner was encouraged by the government recognizing to need to adapt to and mitigate the worst impacts of climate change, he told reporters it feels like “they’ve raised the white flag.”

“But obviously, they put no money there. In fact they’re taking money away from the ministries responsible for adaptation,” he said.

The budget was light on details about the few environmental policies that were proposed in the government’s “made-in-Ontario” climate plan.

Environment Minister Rod Phillips refused to answer questions about the lack of accounting in the budget for government's climate change plan after the budget had been tabled in the provincial legislature Thursday afternoon. Phillips said only Fedeli would be commenting.

The financial document touted that Ontario had reduced greenhouse gas emissions by 22 per cent since 2005 — as it has committed to doing in the Pan-Canadian Framework — while emissions in the rest of Canada have increased by three per cent in the same time period.

It did not mention that most of that reduction was due to the phase-out of coal-fired power generation, a move made by prior Liberal governments.

The federal Liberal government needs to “respect the principles” of that framework, “which states that the provinces and territories should have the flexibility to design their own policies and programs supported by federal investments to meet emissions reduction targets, rather than impose new costs on hard-working Ontario taxpayers and businesses.”

On its first day in power, the Ford government cut a cap-and-trade program. If it was still in place, Ontario would not have to abide by the federally-imposed price on carbon pollution. Its plan includes an alternative pollution-pricing mechanism for industry.

A $400-million over four years emissions fund, which remains a key feature of the Ford government’s climate plan, “could consider investing in cost-effective projects in various sectors, such as transportation, industry, residential business and municipal,” according to the budget.

The government also remains committed to placing a “sector-or-facility level greenhouse gas emission performance standards that industrial facilities are requested to meet, and tie emissions to the level of output or production from these similarities.”

The budget also offered a number of environmental proposals without a price tag attached. These include:

With files from Carl Meyer