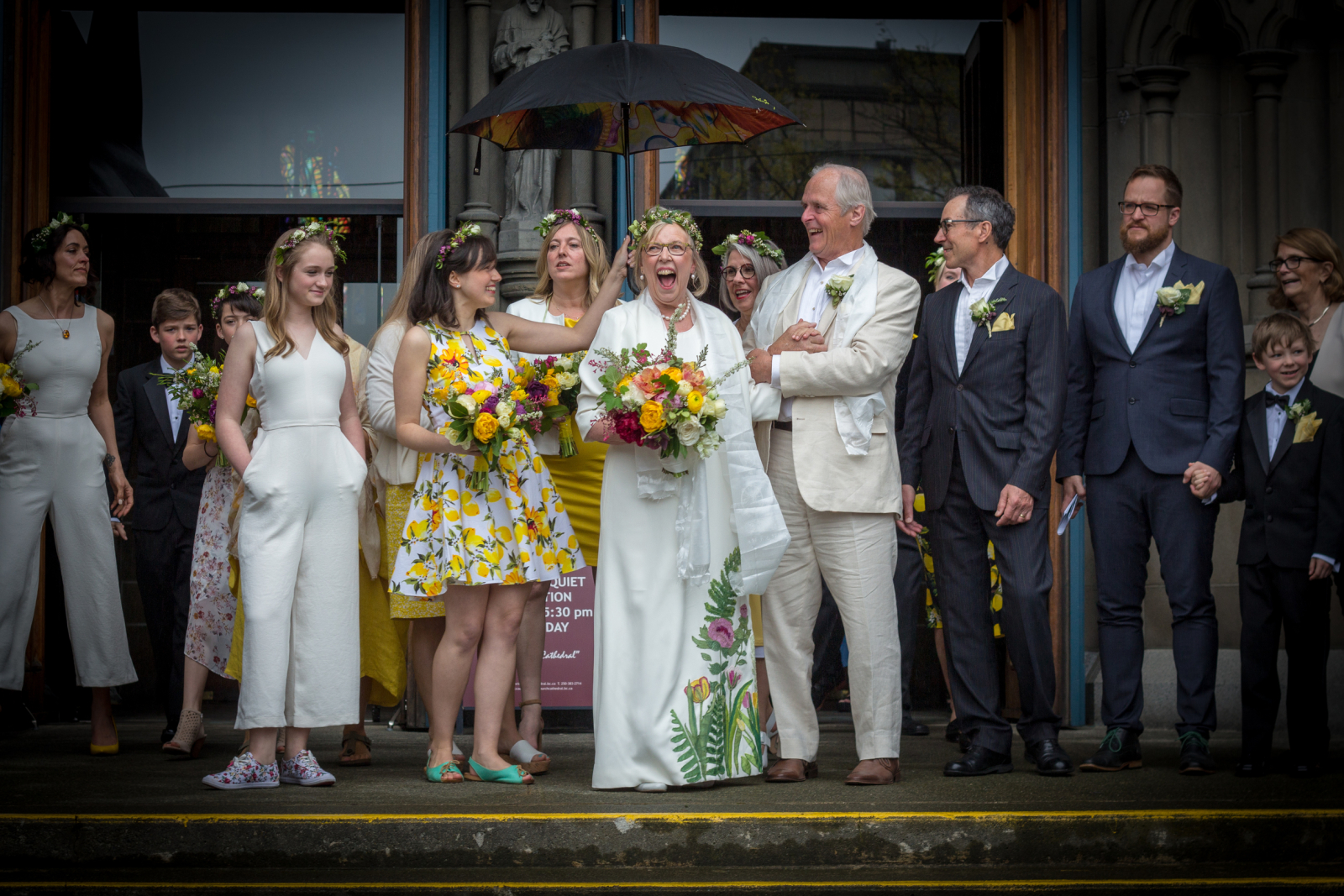 Elizabeth May and John Kidder pose for photographs, where May was surprised by the Orca Rescue Society's blown-up orcas, following their wedding on Earth Day, April 22, 2019. Photo by Emilee Gilpin
Previous story
Next story

Amid the joyful din of the tolling church bells, federal Green Leader Elizabeth May said she was "deliriously happy" minutes after marrying John Kidder, a fellow Green politician and more recently a hops farmer in Ashcroft, B.C., in a ceremony that took place on Earth Day, and included a mix of Indigenous and Western symbols.

"It was kind of amazing," said the bride, who previously said the flowers on display at the Christ Church Cathedral were left over from the weekend's Easter celebrations. "Beautiful and lots of themes and traditions and...I'm very, very grateful to all my friends for helping."

The couple were trailed as they hugged and received the congratulations of well-wishers beyond the steps of the church by several large orca whale puppets each carried aloft by two puppeteers, seemingly supplied by the Orca Rescue Society at the request of her daughter, Cate May Burton.

The ceremony inside had started with a territorial acknowledgment and an honour song gifted by the Lil'wat Nation and known as 'Women's Warrior Song,' to be sung in honour of Indigenous women.

Right Reverend Dr. Logan McMenamie, the local bishop for the Anglican diocese that covers Vancouver Island, acknowledged all of the nations who share their traditional territory with the diocese and gave thanks in several Indigenous languages.

Elizabeth May and John Kidder celebrate with friends and family following their wedding in Victoria, B.C. on Earth Day, April 22, 2019. Facebook video by Emilee Gilpin

He then spoke at length about 'spirituality, service, and sacrifice,' touching on Elizabeth and her husband's new matrimony, the vision for the Green party and his personal hope for more compassion and love in Canada's political future.

Both bride and groom were dressed in white, but the wedding has already been dubbed Canada's greenest ever wedding.

The couple plan to honeymoon by travelling by train to continue the celebration with family and friends in Toronto and Ottawa, including a full work week for May without access to cellular connectivity, according to Sky Losier, May's outreach coordinator.

Kidder is the brother of Margot Kidder, who was romantically linked to Justin Trudeau's father Pierre in the 1980s.

Pierre's son and current prime minister, Justin Trudeau, sent a congratulatory Tweet but did not appear to have attended the ceremony, despite having been spotted surfing in Tofino, at the northern of the 460-kilometre long island, on Sunday morning.

Congratulations to @ElizabethMay & John Kidder on your wedding day. Sophie and I wish you many years of happiness together!

His former justice minister and attorney general, Jody Wilson-Raybould, and famed environmentalist and academic David Suzuki were among the hundreds of guests and thousands of onlookers.