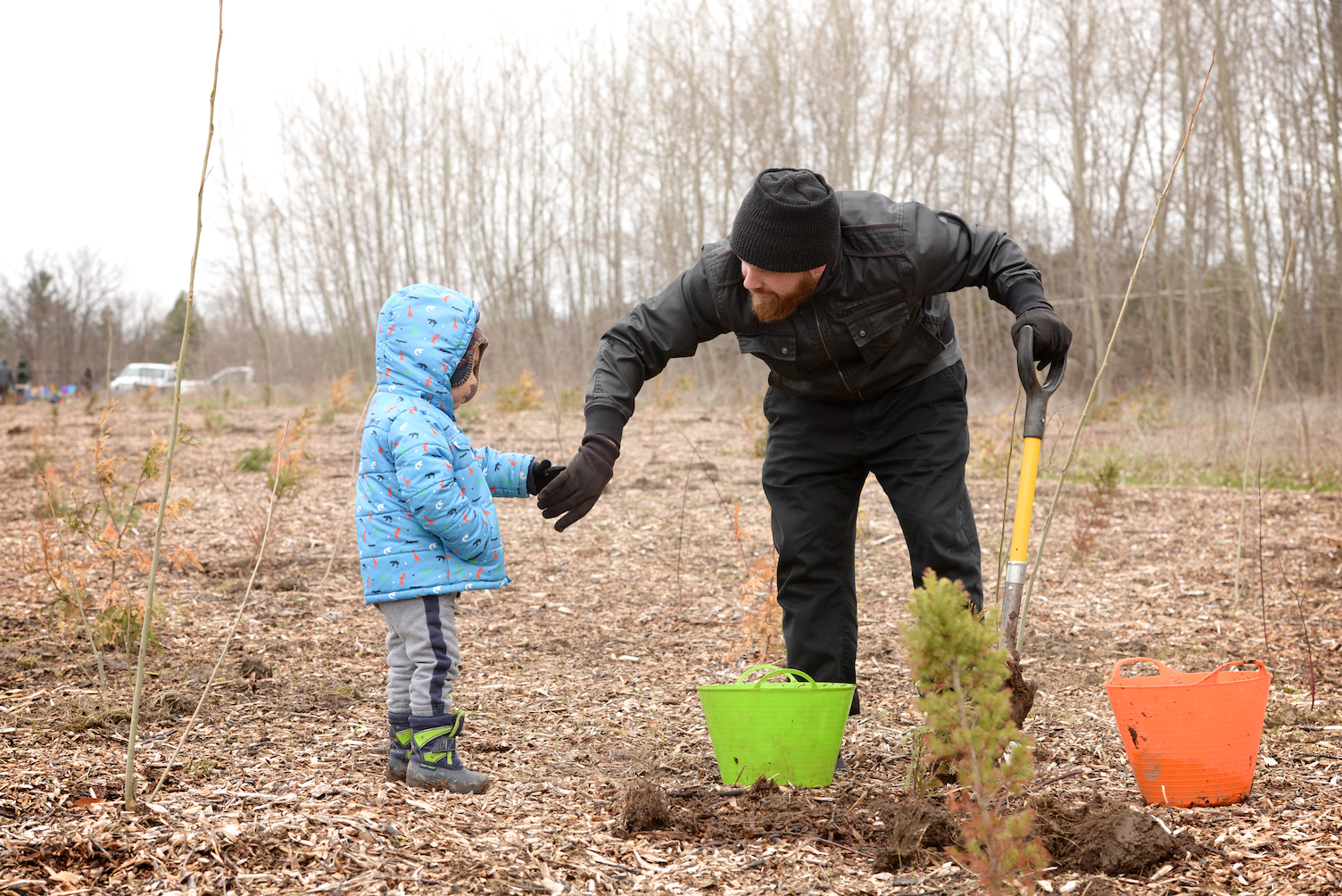 Two days after the Doug Ford government eliminated the largest tree-planting program in the country, Ontario's Environment Minister Rod Phillips was in the Town of Ajax — the eastern Ontario riding he represents — to take part in the annual community tree planting event.

Organized by Forests Ontario (a non-profit funded by the province), the April 27 event aimed to plant 2,000 trees in Ajax's Paulynn Park.

Rob Keen, the CEO of Forests Ontario, who leads the 50 Million Tree Program the Doug Ford government eliminated on April 25, was present at the event. Keen said he has a "constructive" discussion with Phillips about the program. Phillips was "open-minded" and wanted to talk more, Keen said.

But official government messaging has been misleading on the topic, Keen said.

In the days since the program was cut, spokespeople for both Premier Doug Ford and Natural Resources and Forestry Minister John Yakabuski have said the program was not meeting its target, and thus proving to be ineffective.

Lewkowicz initially failed to mention that the program's target date was extended to 2025. The Ministry of Natural Resources made this change through a Memorandum of Understanding signed in 2012 with Forests Ontario.

"Planting trees at this scale will remove about 6.6 million tonnes of carbon dioxide from the atmosphere by 2050 and help make ecosystems in Ontario more resilient to the effects of climate change," says the MOU, obtained by National Observer.

When pressed about the changes in the MOU, Lewkowicz said that the government is trying to balance the budget in a responsible manner. She also said that the initial target date was pushed back when they were unable to reach their targets.

"It was disturbing to see the Ford government actually cut back on planting trees that are going to reduce the erosion that helps to deal with flooding," said Morneau at a news conference on Monday, expressing concerns that Ontario's recent cuts may reflect the policies of federal Conservative Leader Andrew Scheer.

"We have to deal with the issues straight on, issues like taking away the emergency forest fire approaches to dealing with forest fire fighting which the Ford government has done. We can expect that the Scheer approach to cuts is going to align itself with the Ford approach, not dealing with the immediate issues."

(After this story was published, Yakabuski’s office contacted National Observer to confirm that it had reduced the amount it budgeted for forest fires from last year, while noting that 2018 was "a particularly busy fire season" and that it was prepared to increase funding in 2019 if needed. Exceptional forest fire seasons are expected to become more frequent due to climate change.)

In her statement, Lewkowicz also noted that the Ministry was "happy to see that Forests Ontario is going to continue planting trees without the use of taxpayer dollars. The fact that they can continue their program through existing and new funding networks shows that taxpayer dollars can be redirected to what matters most to the people of Ontario."

Keen, who has been with the agency since 2002, said Forests Ontario has rallied other partners to support the tree-planting program since the work to increase Ontario's forest cover was "an important task." But he said that the government still should have been increasing its support, instead of leaving the program.

"Forests Ontario primary activities is to plant trees to ensure healthy forests for our future. As such, we will continue to look for private and public sector partners," he told National Observer. "There is no expectation that province covers the full costs to tree plant but we also need to recognize that tree planting provides broader societal benefits, economic and environmental. Ensuring these vital public benefits warrants government support."

Lewkowicz neglected to mention any benefits of tree-planting in the province, stating instead that the government "is committed to balancing the budget in a responsible manner to protect what matters most – healthcare, education, and other critical public services such as emergency preparedness."

Our government is committed to balancing the budget in a responsible manner to protect critical public services. We need to maximize value for taxpayer dollars to do that. This program has been falling short of its targets. Our forestry industry are great stewards of our forests. pic.twitter.com/urk5IJrmpc

The 50 Million Tree Program is an afforestation program — it plants areas that haven't had trees on them for decades. Much of those lands are in rural southern Ontario, where a century ago, those lands were just sand dunes.

The province has repeatedly said that the private sector planted 68 million trees in Ontario last year, which Keen said are reforestation numbers. It is unclear what the government's source is for this statistic. The last provincial report on the forest sector was done for the 2013-2014 years and found that the sector planted 63 million trees. The government has also decline to share how many trees were harvested.

With the government's focus on improving efficiencies, Keen expected a reduced budget. He had taken several meetings with the government about ways to continue their work; the government had never indicated the program would be eliminated, he said, noting too that Forests Ontario have had "a very positive relationship" with the Ministry of Natural Resources for the last 11 years.

"It was a surprise that the whole program was canceled," Keen said, noting that he was informed the day after the Ford government tabled its April 11 budget.

The ministry and Forests Ontario are now in consultation about how to shut the 50 Million Tree Program down with minimal disruption. The agency is a week away from starting tree-planting for the spring season. Commitments have been made to landowners by conservation authorities, stewardships, First Nations, municipalities and forestry consultants.

"Everyone had planting plans in place, ordered the stock, hired staff to do the tree plant for the spring. Those commitments were there and had been made," he said. "Now we have to fulfill those commitments to have a smooth transition as the program is wound down."

Ontario's tree-planting by the numbers

For as little as 15 cents a tree, Forests Ontario will plant trees on your land, tend them a year later, and assess their survival in years one, two and five, provided you allocate at least a hectare to future forest. (The landowner agrees to let the trees grow 15 years, but that deal is void if you sell the land).

According the 2019 Environmental Commissioner report, average forest cover in southern Ontario stands around 26 per cent, with some areas seeing as low as five per cent of forest cover.

The report identified that 30 per cent of land needs to be planted with trees to restore the forest cover in southern Ontario to optimal levels. That equates to roughly 680,000 hectares.

The average annual deforestation rate in southern Ontario from 2009 to 2013 stands at 631 hectares.

Editor's note: This story was updated at 1:05 p.m. EST on May 1, 2019 to include additional comments from Yakabuski's office.

My heart is bleeding for

My heart is bleeding for Ontario. In 1968 on our farm outside Peterborough, we planted 20,000 trees in all. In one field the Province planted 7,000 themselves. These trees are now 50 years old. This would not have happened without the programme of our great province. What are we coming to, now that our need is greater than ever.

Trees as effective carbon sequesters only work while they are growing, Now that so much of Canada's forest cover is dead, dying or on fire, our forests are emittting more carbon than they are sequestering. We have a lot of trees to replant before we can start counting our forests as part of our carbon mitigation plan. So Ford and Phillips by cancelling the tree planting funds are actively aiding and abetting global and especially Ontario's contributions to the climate catastrophe on more than one front. Talk about the fifth column traitors.