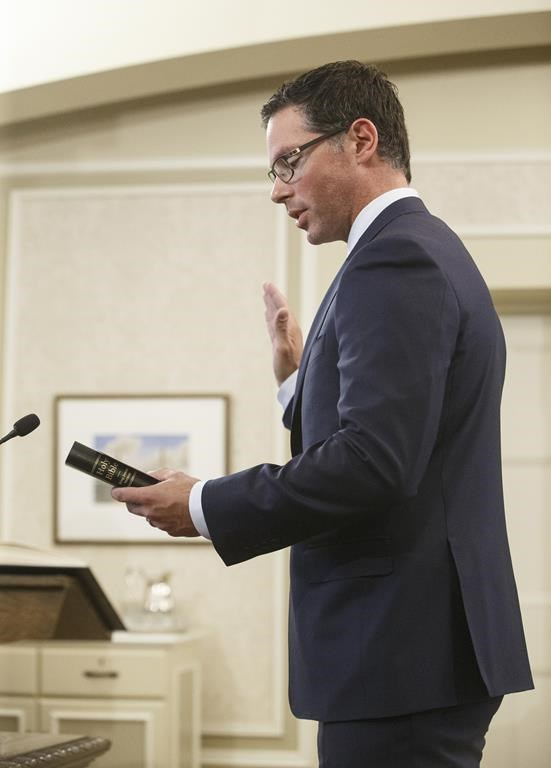 Alberta Premier Jason Kenney and his cabinet were sworn in Tuesday to form the first United Conservative government in the province. Here's a look at who they are:

Doug Schweitzer (Justice and Solicitor General): represents Calgary-Elbow as a first-term MLA. He is a lawyer who focused on bankruptcy and restructuring and served as vice chairman of Calgary's drug treatment court. He ran against Kenney for the UCP leadership in 2017.

Tyler Shandro (Health): a lawyer and first-time MLA representing Calgary-Acadia, with a long record of community service. He has been a member of the National Parole Board, the Calgary Police Commission and the University of Calgary senate.

Ric McIver (Transportation): back for a third term, representing Calgary-Hays. He was a long-time Calgary city councillor before winning a seat as a Progressive Conservative in 2015. He served previously as transportation minister and in the jobs and labour portfolio.

Tanya Fir (Economic Development, Trade and Tourism): a first-term MLA for Calgary-Peigan. She has a commerce degree from the University of Calgary and has worked as a human resources adviser in the oil and gas industry.

Adriana LaGrange (Education): a rookie MLA for Red Deer-North. She has served as a Catholic school division trustee in Red Deer and worked as a rehab practitioner for the physically and mentally disabled.

Travis Toews (Finance): a new MLA representing Grande Prairie-Wapiti. He is an accountant with extensive experience on provincial and national boards in the agriculture and beef industries.

Jason Nixon (Environment and Parks): returns for a second term as MLA for Rimbey-Rocky Mountain House-Sundre. He will also be government house leader, directing the flow of legislation in the house. Before politics, he worked for more than two decades in the non-profit sector.

Sonya Savage (Energy): a first-term MLA for Calgary North-West. She is a lawyer who has worked in the oil and gas sector for more than a decade, serving as director of policy and regulatory affairs for the Canadian Energy Pipeline Association.

Rajan Sawhney (Community and Social Services): a new MLA for Calgary-North East. She has a degree in economics and political science and has worked in the oil sector for two decades.

Josephine Pon (Seniors and Housing): a rookie MLA for Calgary-Beddington. She has worked as an international trade consultant and has managed multiple restaurants.

Rebecca Schulz (Children's Services): a first-term MLA representing Calgary-Shaw. She is a communications professional, with a masters degree from Johns Hopkins University, and once worked for former Saskatchewan premier Brad Wall.

Rick Wilson (Indigenous Relations): represents Maskwacis-Wetaskiwin as a rookie MLA. He served as a councillor for the County of Wetaskiwin and as a public school trustee.

Demetrios Nicolaides (Advanced Education): a first-term MLA for Calgary-Bow. He is a communications professional with experience and training in conflict resolution. He has worked on peacekeeping and reconciliation in Cyprus.

Leela Aheer (Culture, Multiculturalism and Status of Women): returns for a second term, representing Chestermere-Strathmore. She has been a music, drama and French and Spanish teacher, and was the critic for children's services and the status of women.

Jason Copping (Labour and Immigration): a new MLA, representing Calgary-Varsity. He has worked as a management consultant, labour mediator and arbitrator, and has master's degrees in industrial relations and law.

Kaycee Madu (Municipal Affairs): a first-term MLA for Edmonton-South West. The lone UCP member in the capital city is a lawyer who studied in Nigeria and has worked as a senior technical adviser for the Alberta government.

Prasad Panda (Infrastructure): a returning MLA representing Calgary-Edgemont. Born in India, Panda was first elected in 2015 after working as an engineer in the oil and gas sector.

Nate Glubish (Service Alberta): a new MLA representing Strathcona-Sherwood Park. He has a commerce degree from the University of Saskatchewan and has worked as an investments adviser, focusing on tech companies.

Grant Hunter (Red Tape Reduction): a returning MLA for a second term in Taber-Warner. He is the owner-operator of a construction company and holds a master's degree in business administration.

Jason Luan (Mental Health and Addictions): returns to the legislature for a second stint, this time for Calgary-Foothills. He was previously in the house from 2012-2015 with the Progressive Conservatives. He has a master's degree in social work from the University of Calgary.

Dale Nally (Natural Gas): a first-term MLA for Morinville-St. Albert. He has a master's degree in education and a background in business. He has been co-chair for Diversity Edmonton, which promotes hiring people with disabilities.

Belot: Albertans have been fooled by a myth about pipelines and the oilsands

And who will protect the

And who will protect the environment, our Aboriginal community, our First Nations, our species, Earth, humanity? Won't be Jason and his ministers (priests). Alberta will continue to suck life out of humanity to further the interests of the 1%, at the expense of insects, butterflies, deer, humans, and in support of cancer. Kenney is the world's greatest supporter of cancer. Hitler pales in comparison to Jason Kenney. In fact, the only thing Kenney fails to achieve is mass genocide.