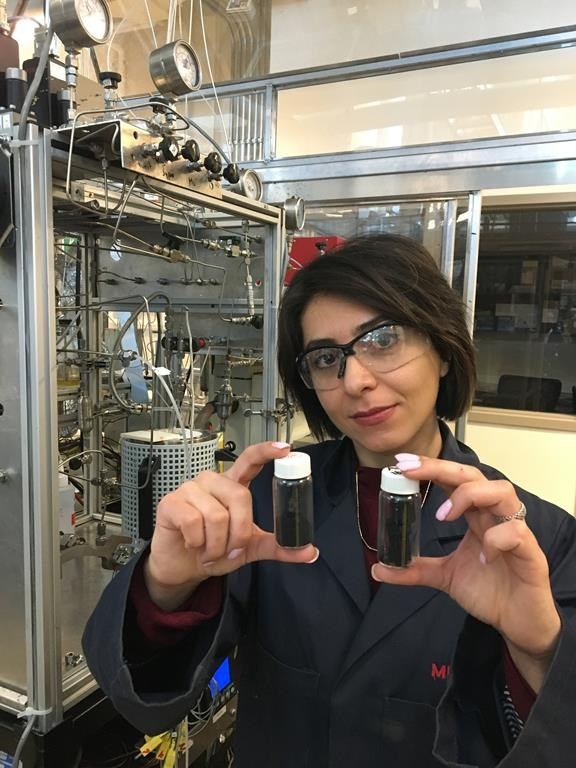 A researcher at the University of Calgary says she has developed a method of turning greenhouse gases into valuable carbon nanofibres.

Mina Zarabian came up with the concept while completing her doctorate in chemical and petroleum engineering at the university's Schulich School of Engineering.

Zarabian and her professor, Pedro Pereira Almao, worked together to come up with the technique.

The nanofibres have multiple industrial uses that included replacing metal in cars and airplanes, wind turbines, battery manufacturing and construction.

"This is a process that turns natural gas and CO2, carbon dioxide, both known as greenhouse gases, into solid carbon nanofibres which can be sold in a brick or powder for a lot of industries that utilize them," Zarabian said during a tour of her lab.

"It can be used everywhere that you can imagine ... transportation vehicles to make them lighter and more durable so they can be more fuel efficient."

The transformation moved from its theoretical beginnings in the chemistry lab to a working model at the university.

Lines from tanks of carbon dioxide and methane feed into a small chamber the size of a balloon. Once it's exposed to extreme heat, black powdery residue appears in a glass tube. A piece of metal in the tube acts as a catalyst.

"It's the secret sauce of our process," said Zarabian. "The good thing is it's not something very magical or expensive or platinum or some super-fancy expensive metal. It's a normal metal which can be found anywhere with a high amount of resources."

Carbon fibres are expensive and currently cost about $100 per kilogram, she said.

Zarabian would like to see the technology eventually installed at natural gas power plants.

"Then we are going to send clean electricity without carbon to Alberta and then also harvest carbon fibre to build something useful."

A spokesman with Greenpeace said he's happy efforts are continuing to reduce greenhouse gases, but the problem won't be solved by technology alone.

"Without seeing the technology, it's hard to say how well this would work," said climate campaigner Mike Hudema.

"There are a lot of questions to be answered, including how much it would cost and is it possible to build it to the scale required to make a real difference?"

So, given that it was

So, given that it was developed at a public university, I find myself wondering just how secret this sauce is, and if it is secret rather than public, why is that?

Why is there no report on the

Why is there no report on the amount of energy required to make this process operate? There are quite a few technologies to capture carbon dioxide. They typically require substantial energy inputs to make them work because of the chemical properties of carbon dioxide. And of course the amount of energy required will the a key barrier to making the process commercial.

This is greenwashing if

This is greenwashing if associated with oil production. Carbon fiber can be made from any carbon source, and this takes well-refined inputs that are expensive already. The carbon fiber, in turn, is one of the nastiest kinds of plastic pollution. Your body can't eliminate it, but it pokes holes in things. It is the only form of carbon sequestration I've heard of that makes it into another kind of hazard. People won't want to just bury it.