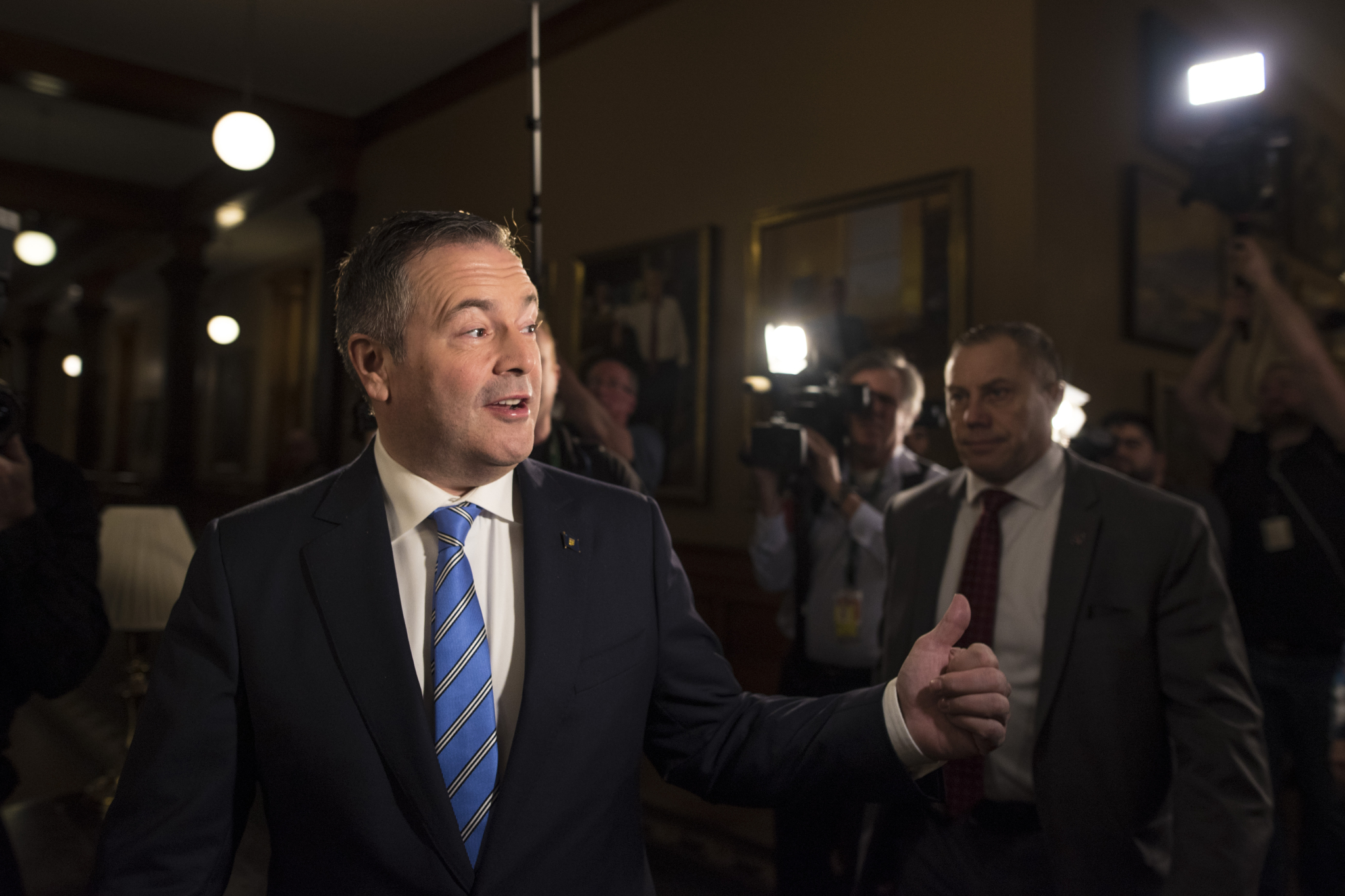 Alberta Premier Jason Kenney walks past journalists in Toronto on May 3, 2019. File photo by Tijana Martin
Previous story
Next story

As small towns write off millions of dollars in unpaid taxes from Alberta’s slumping oilpatch, Premier Jason Kenney’s government says it has sprung into action to find solutions for both the industry and municipalities.

Provincial Municipal Affairs Minister Kaycee Madu made the comments after meeting with Al Kemmere, president of Rural Municipalities of Alberta, whose members report they are owed at least $81 million in unpaid property taxes from oil and gas companies which refuse to pay or have gone bankrupt.

Rural Municipalities of Alberta is an independent association that represents 69 counties and municipal districts covering about 85 per cent of Alberta's territory and 17 per cent of its population.

Madu told National Observer in an emailed statement that the government recognizes the “urgency" of the situation and that he met with Kemmere on May 8 to chart a path forward.

The meeting was a few days after Premier Kenney said he wanted to bring industry's concerns about high property taxes to the municipalities.

“In light of the urgency of this situation, we recently met with Mr. Kemmere, and are working towards finding solutions that strike a balance between the financial needs of the municipalities and the viability of oil and gas companies,” Madu said.

“For many municipalities, oil and gas is a significant source of revenue. As such, we are seeking to find solutions to ensure there are no unnecessary barriers to these companies in the face of persistently low commodity prices.”

Functioning companies not paying their taxes

Kemmere explained that the problem of unpaid taxes has become significant since global commodity prices crashed in 2014 — a crisis that has rocked the Canadian oilpatch and thrown tens of thousands of people out of work.

“More recently, we’ve seen situations where we’ve actually got functioning companies who have not gone insolvent, who appear to be continuing to operate, but are also choosing not to pay their taxes,” he told National Observer in a phone interview.

“They may not think they can’t afford to pay but the reality is they continue to operate and as they continue to operate they choose not to pay their taxes. They are making a deliberate decision not to pay those taxes, which then leaves the municipality with the challenge of collecting the dollars from other taxpayers or having to significantly modify their services.”

He also said he wanted to make sure that Premier Kenney understands the challenges municipalities face. Most recently, a company that operated about 4,700 wells, Trident Exploration, shut down, leaving an estimated $329 million in cleanup liabilities at old sites as well as millions of dollars in unpaid taxes.

Billions in clean up liabilities

Trident's unpaid liabilities are among the billions of dollars in estimated costs required to clean up aging oil, gas and pipeline operations in the Canadian oilpatch. The provincial energy watchdog, the Alberta Energy Regulator, has privately estimated that this cleanup cost could be as high as $260 billion. The regulator has also warned that taxpayers could wind up footing the bill in the absence of tougher regulations that would require companies to pay higher security deposits or demonstrate their financial viability before obtaining operating permits.

As it closed down its operations, Trident cited high property taxes as one of the factors in its demise.

This prompted Premier Kenney to tell reporters in Ottawa that he wanted to bring industry concerns about the high level of taxes to municipalities.

Kemmere said he hoped to speak to Kenney about how much municipal revenues are eroding due to unpaid property taxes from industry.

The Canadian Association of Petroleum Producers, the main lobby group representing oil and gas companies, declined to comment about industry not paying its property taxes.

Asked about the meeting with Madu, Kemmere told National Observer that they were able to have a high-level discussion about the property tax problem and other issues, but more work is needed.

Kemmere is also a councillor at Mountain View County, located between Calgary and Red Deer.

Mountain View has also been affected by the shutdown of Trident and stands to lose $567,800 in unpaid taxes , according to city documents posted for a council meeting on May 8. It is one of several municipalities facing budgetary shortfalls because of the unpaid taxes.

Kemmere added that Trident had approached these towns to ask for a break on its taxes, before it shut down.

“Trident has come to various members and asked for some adjustment in taxes. And at the same time, Trident, in their arguments, has not really been open to sharing their books to really validate any requests that they have had,” Kemmere said. “And that’s a common thing. When companies come to municipalities, they don’t really open their books. Our books (at municipalities) are all open and transparent and on our website because they have to be. but we never get that chance to open their books and legitimize things.”

Another town, Woodlands County, is facing a $4.3-million shortfall — more than 20 per cent of its budget — due to unpaid taxes by Trident and one other company, the CBC reported on May 10.

"We were blindsided," Woodlands County Mayor Ron Govenlock told the CBC. "The problem really didn't surface until we started getting into the budget deliberations. The value of the two particular industry players that are oil and gas is so substantial that it represents in excess of 20 per cent of our tax income."

The CBC has also reported that Wood Buffalo, the county around the oil hub of Fort McMurray, has $14.5 million in unpaid taxes to collect.

Kemmere said his association would be meeting next with an industry group and hoped to follow up again with the government.

He also noted that Alberta municipalities already face an uphill battle when it comes to their finances, since a portion of their property taxes are used to cover the cost of provincial education programs. Overall, cities across Canada estimate that they collect only 10 per cent of tax revenues, versus the 90 per cent collected by the federal and provincial governments.

Maybe Mr. Kenney could use

Maybe Mr. Kenney could use his $300 million fund that he committed to using to fight Canadian citizens concerned about climate change and the dire impacts it will have on our planet and our children and grandchildren, and instead apply it to clean up the mess and pay the taxes of the numerous oil and gas concerns he so loves. Then he could challenge the fossil fuel industry as to why they are focused only on their own profits, and not the good of the Albertans that so staunchly support their industry. Maybe they'll commit to not walking out without paying their way, like the wonderful corporate citizens they obviously are. Maybe they'll stop automating processes, to preserve high-paying jobs for Albertans, instead of continuing to trim costs to profit themselves and shareholders. Or maybe they'll just continue to expend all their efforts on self-enrichment, lobbying to revise downward all of our pollution controls, and general propaganda. Since fine upstanding citizens like Mr Kenney obviously are prepared to buy the propaganda for his own self-advancing purposes. they probably don't have much incentive to change.

It was the later half of Conservative rule from the 1990's onward that resulted in a decline, when the cycle was almost abandoned.

Yes started mostly in the

How about a peaceful protest

How about a peaceful protest by municipalities and their residents. Demand payment from the operating fossil fuel extractors. Oh, that won't work, the RCMP will arrest them for exercising their rights. Or does illegal, unauthorized, unnecessary arrest only happen to indigenous people?

All the previous comments are

All the previous comments are certainly apposit and I hope the people of Alberta who elected Mr. Kenney realize that they gave him the impossible task of salvaging the sinking fossil fuel industry that is wilfully and with malice aforethought, wrecking not only the Tar Sands, Alberta, and a major part of the Canadian economy but they are behaving like the psychopathic corporations we have come to know and loathe.

If he were not such an unlikable character, one could almost pity Mr. Kenney, he and the oil sector are going out in a mutual act of poisonous destruction.

How ironic that most rural