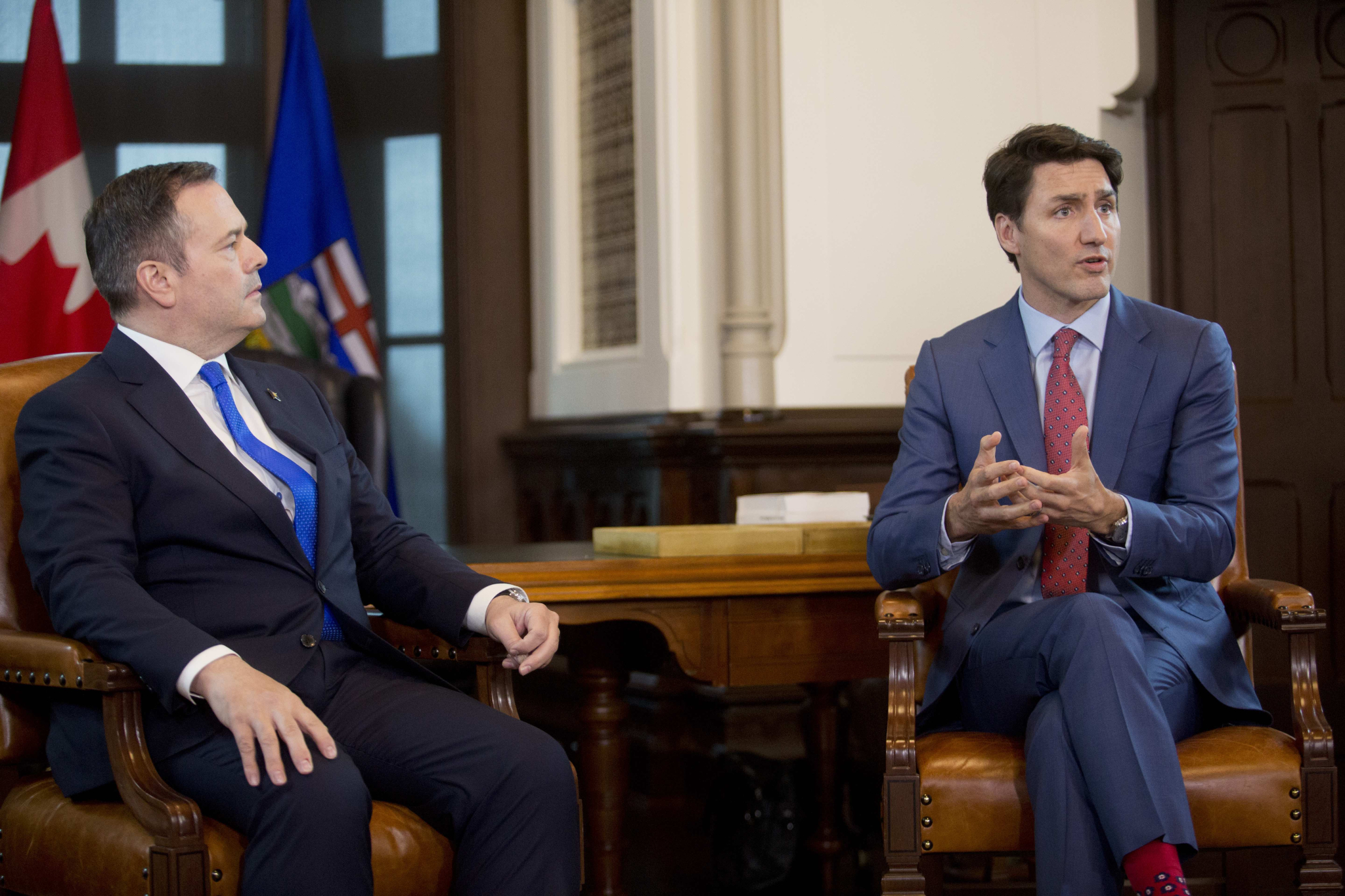 Alberta Premier Jason Kenney looks on as Prime Minister Justin Trudeau welcomes him into his Ottawa office on May 2, 2019. Photo by Andrew Meade
Previous story
Next story

As Alberta Premier Jason Kenney pushed the federal government to keep its proposed environmental laws out of the oilpatch's business in Ottawa on Thursday, back home the provincial energy regulator scrambled to assess the safety of 4,400 licenced well sites abandoned by a company that ran out of money.

The company, Trident Exploration, abruptly announced on Tuesday that it was ceasing operations, terminating 33 employees and 61 contractors, while abandoning 4,700 wells. It blamed low gas prices and capacity constraints on a TransCanada natural gas pipeline system, along with high municipal property taxes and lease payments.

The company estimated it had about $329 million in clean up liabilities.

"We're very concerned about the challenge of well reclamation in Alberta," Kenney told reporters in Ottawa before meeting Prime Minister Justin Trudeau and after speaking to senators about his concerns over federal environmental legislation.

The Trident case highlights ongoing economic concerns in Alberta that threaten jobs. It also highlights concerns raised by the Alberta Energy Regulator (AER) in internal documents about weak provincial rules that fail to crack down on operators that don't have enough money set aside to cover cleanup costs at the end of an oil, gas or pipeline project.

Those concerns contrast with frequent claims by industry lobbyists and some politicians that Alberta has strong environmental oversight. Kenney and oilpatch industry stakeholders have used their claims to make the case against the Trudeau government's proposed environmental legislation, Bill C-69, that would change how federal assessments of projects are done.

When asked who was to blame for the growing liabilities in the oilpatch, Kenney refrained from mentioning any possibility of tougher rules.

Instead, Kenney said he wants Trudeau to work with Alberta to create incentives for companies to clean up old wells.

“One of the issues I may be able to raise with the prime minister today is how we can work together to incentivize well reclamation in a way that also generates economic growth," Kenney told reporters. "A lot of unemployed oilfield workers could be at work doing environmentally responsible reclamation for abandoned wells.”

A recent Supreme Court decision about a company called Redwater Energy that ruled bankruptcy was no excuse for avoiding cleanup payments has also put pressure on the oil and gas industry and financial institutions that back exploration.

Kenney said his government has more work to do in reviewing the Supreme Court’s decision before identifying how it can assist companies with compliance. He also said his government would be meeting with municipalities to raise concerns identified by Trident about high property taxes.

“There are a number of small and junior gas producers in Alberta that are running down their balance sheets, almost giving away their natural gas, because of market asset challenges,” he said.

“They simply can’t afford higher and higher municipal taxes in addition to the uncertainty created by the Redwater decision.”

A federal official later told National Observer that Kenney didn't raise the issue with Trudeau during their meeting on Thursday.

An industry group manages orphan wells in Alberta, collecting funds from member companies who cover the costs of reclamation.

Kenney also said he would speak to PM Trudeau about working together on a well reclamation plan after news yesterday that a company was walking away from more than 4000 wells and leaving over $300 million in cleanup liabilities. pic.twitter.com/ofVdReuvYl

Liabilities could be as high as $260 billion

Last year, National Observer obtained internal AER documents on oilpatch financial liabilities as part of a joint investigation with Global News and the Toronto Star. The documents included warnings in a presentation from a senior regulatory official who said that clean up liabilities could be as high as $260 billion for oil, gas and pipeline operations. The official also said that stronger rules could help ensure taxpayers don't wind up getting the bill for cleaning up abandoned assets.

News of Trident's failure revealed that the provincial regulator was unable to get the company to comply with orders to cover the cost of cleanup liabilities and transfering assets it couldn't handle to other companies. This was despite weeks of discussions, the AER said in a statement.

The company informed the AER on Monday that it was ceasing operations, the regulator said in a statement on May 1.

The AER then ordered Trident to properly manage its shut down, ensuring that it was covering its liabilities or transfer the assets to another company. But Trident didn’t respond to its order. Instead, the AER said Trident’s directors “ceased operations, terminated employees and contractors, and then resigned.”

The AER told National Observer in a statement on Thursday that Trident informed the regulator of its decision through an email sent on April 30.

"We are working to ensure that the public and environment are protected and will assess any high risk sites to ensure there are no immediate risks," the regulator added.

Editor's note: This article was updated at 6:51 p.m. ET on May 2, 2019 with additional details about Trident Exploration's estimate of its liabilities.

This is just another example

This is just another example of the energy sectors failure to take into account the full cost of production which includes decommissioning, while living high on the hog and lining their pockets. It is also another example of conservative governments that do a rotten job of proper regulation on behalf of all citizens. I am not saying that poor regulation doesn't happen with other parties oh, but it is clearly a greater factor in the small government, no regulation philosophy of conservative governments. Alberta has had bad government for more than 50 years. And they have just elected the authors of that bad government again (different party names, same people).

Yes. Exactly. But we have to

Yes. Exactly. But we have to remember, that in a petro-state, particularly one that has lived high and ill informed for decades......reality is hard.

Pipe dreams of black bonanzas, high quality services for just about everything, and 0 taxes: now who wouldn't vote for that??

Clean up costs as high as 260 billion........and that was before this latest company shut its doors.......and Jason's idea is that they shouldn't have to pay their share of municipal taxes???

We can begin to imagine who is going to get stuck with the bills. But considering the increasing liabilities of severe weather and climate catastrophes, it also begins to look like governments might have to file for bankruptcy as well....and that would leave the public dealing with the mess.

My depressing guess??? We;re just going to leave all those holes in mother earth out there....leaking whatever they choose to leak......as one more monument to a culture of rape and pillage, where smart crooks like JK worked hard to convince little people he was the conductor who would give them a free ride....

To somewhere. Hell most likely.....but we bought the ticket, so I guess should fasten our seat belts and enjoy the view.

If fossil fuel companies can

If fossil fuel companies can't make a go of it, while paying appropriate costs to repair the damage they've done, and are doing, this is a message to all of us that we need to accelerate a transition to renewable energy. It's unfathomable to me how a political leader can completely ignore climate science, arguing that citizens should prioritize continued mega-profits for billionaire fossil fuel firms-many of them foreign-owned-- over the actual survival of our children's generation! It's high time we stop electing men who are too stupid to understand science and too selfish to be concerned for anyone but themselves and their business associates.

Ford, Kenney, Moe, you are in league against our children and our planet. For shame. Read the IPCC reports already!

Perhaps Kenney could allocate his 30 million “propaganda” budget to this problem, On second thought that money should be used for netter causes like health care, or education, or clean energy......

Perhaps Kenney could allocate his 30 million “oil industry propaganda” budget to this problem, On second thought that money should be used for netter causes like health care, or education, or clean energy......